Is a court-martial in order? 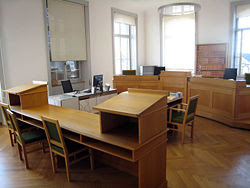 The theme at Goat Rope lately has been the Odyssey of Homer, along with links and comments about current events. We're almost done, but there are a few loose ends.

One of which is about Odysseus' style as a leader. It's tempting to wonder how a contemporary military officer would be treated after performing as badly as he did during his homecoming (my guess is the Bush administration would probably promote him).

To recap, he lost 12 ships and 600 or so men--after the fighting was over. As Jonathan Shay sums it up in Odysseus in America: Combat Trauma and the Trials of Homecoming reminds us,

*he loses control of his troops and suffers 72 casualties in a botched and unnecessary pirate raid on the Circoneans;

*he puts himself and his men at risk needlessly and impulsively (the whole Cyclops thing);

*he protects his own ship but loses the rest when they approach the land of the Laestrygonians;

*he can't even be bothered to count his men when he leaves the island of Circe;

*he can't control his men when they violate the command not to kill and eat the sun god Helios' cattle. (Note: all of these have been the subjects of previous posts.)

As Shay puts it after looking over the evidence from the Iliad and the Odyssey,

As a staff officer, strategist, independent intelligence operative, and solo fighter, Odysseus was brilliant. As a troop leader, he was a catastrophe. Homer's great epics show him in full depth and perspective.

One thing hasn't changed from then to now in war as well as "peace," ordinary people pay the price for bad leadership.

SPEAKING OF PAYING FOR BAD LEADERSHIP, it looks like the Senate will vote today on the Wall Street bailout bill. The new version raises FDIC depositor's insurance from $100,000 to $250,000 and includes more business tax cuts--as if blowing $700 billion on corporate welfare wasn't enough.

WHILE WE'RE TRYING TO FIGURE OUT THE ECONOMIC CRISIS, we could always buy local.

HERE'S A LITTLE REMINDER that whatever happens with the bailout, there's nothing new about corporate welfare.

SOMETHING TO THINK ABOUT. I've said this before and I'll say it again: what if everyone's Social Security was privately invested on Wall Street? Some people, who shall remain nameless, still want to do that.