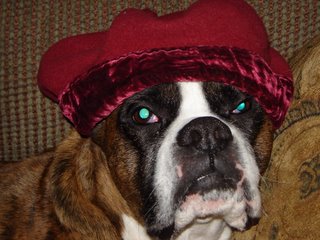 House Bill 4023, which would raise West Virginia's minimum wage in three steps to $7.25 by 2008, passed the WV House of Delegates by a vote of 87-10. It is now triple-referenced in the state Senate. This is a pretty good sign that some senate leaders want it to die. With one week to go in the session, there's still time to make some noise.

There are some limitations in the bill which could easily be amended to cover more workers given the political will. More to come soon.

Photo: despite his opulence, even the regal gentleman pictured here knows that we need to raise the minimum wage.

In the early days of the Republic, when various political factions were pushing for the United States to enter the Napoleonic wars on the side of France or England, John Adams said, “Great is the guilt of an unnecessary war.”

The people who “gave” us the unnecessary war in Iraq got some unpleasant news from a Zogby poll of US troops in Iraq, which found that a 72 percent majority “think the U.S. should exit the country within the next year, and more than one in four say the troops should leave immediately…”

The survey found differences between the services but overall consistency. Members of the Reserves and National Guard overwhelmingly favored leaving within a year, by 89 and 82 percent respectively. About three quarters of Guard and Reserve soldiers favored withdrawal within six months. In the regular Army, about 70 percent favored withdrawal within a year, as did 58 percent of Marines. Significantly, the poll was taken before the recent spike of violence in that country.

At this writing, around 2,300 U.S. military personnel have died in Iraq and nearly 17,000 have been wounded. No one knows the number of Iraqi casualties, although estimates run as high as 100,000.

Financially, the National Priorities Project estimates the cost of the war to be around $245 billion and climbing. Using estimates based on IRS data, the NPP estimates that the war has cost West Virginia $893.3 million. The administration and its supporters in Congress have slashed vital programs to pay for this war and to pay for the even more (financially) expensive tax cuts aimed mostly at the richest Americans.

While the wealthiest continue to benefit from tax breaks, the Associated Press reports that the Bush administration has proposed cuts in medical programs for tens of thousands of veterans in the proposed federal budget. According to the AP, “Even though the cost of providing medical care to veterans has been growing by leaps and bounds, White House budget documents assume a cutback in 2008 and further cuts thereafter.”

So much for shared sacrifice in wartime. Excuse me, but exactly who is supporting the troops?

The West Virginia House of Delegates voted yesterday to raise the state minimum wage in three stages to $7.25 by 2008. The bill, HB 4023, passed by a margin of 87-10 and has been communicated to the state Senate, where it faces an uncertain fate.

The West Virginia AFL-CIO is asking for people who will benefit by this bill to contact their senators. According to an action alert from the state labor federation, "It is especially important to contact Senator Mike Oliverio; he would like to hear from those that would benefit from the passage of this bill. You can contact him at (304)-357-7919. Or you can call toll free at (877)-565-3447 to contact the senator of your choice."

Details of the final version of bill and last minute amendments will be posted soon.

Today is Ash Wednesday, the first day of the penitential season of Lent. According to ancient Christian tradition, the 40 days before Easter (excluding Sundays) are a time of repentance and reflection inspired in part by the story of Jesus fasting for 40 days in the wilderness prior to beginning his public activity.

Fasting is a traditional Lenten practice. It is also a good time to remember that for many people, fasting is not voluntary and every day is Lent. Our old friend Isaiah, a frequent guest on the Goat Rope, has some powerful things to say about this:

Is not this the fast that I choose: to loose the bonds of wickedness, to undo the thongs of the yoke, to let the oppressed go free and to break every yoke?

Is it not to share your bread with the hungry, and bring the homeless poor into your house; when you see the naked, to cover him, and not to hide yourself from your own flesh?...

If you take away from the midst of you the yoke, the pointing of the finger, and speaking wickedness, if you pour yourself out for the hungry and satisfy the desire of the afflicted, then shall your light rise in the darkness and your gloom be as the noonday...

And your ancient ruins shall be rebuilt; you shall raise up the foundations of many generations; you shall be called repairer of the breach, the restorer of streets to dwell in.

Congress recently passed legislation that will slam both low income families who receive public assistance and the states that have to administer the programs. But the real welfare scandal continues unabated.

Contrary to stereotypes, the real abusers of the country's "welfare" programs aren't poor people. Rather, they are corporations that cash in on economic development grants, tax breaks, and other subsidies from state and local governments. In many cases, companies have pitted states, cities, and counties against each other in costly bidding wars where each tries to outdo the other in giving away the store. It's another example of socialism for the rich and free enterprise for the poor.

RACING TO THE BOTTOM. The result is a race to the bottom where the real building blocks of quality economic development--like public investments in infrastructure and education--are sacrificed for bogus benefits that never come. In many cases, the companies that cash in have failed to create good jobs or actually laid off workers. In others, they simply move on to the next victim when the giveaways stop.

Often, the employers who benefit from corporate welfare programs pay their employees such low wages that workers have to depend on public assistance programs such as food stamps, the Earned Income Tax Credit, Medicaid, and the Children's Health Insurance Program.

According to Greg LeRoy, director of Good Jobs First (www.goodjobsfirst.org) and author of The Great American Jobs Scam: Corporate Tax Dodging and the Myth of Job Creation, "This system costs taxpayers an estimated $50 billion a year in total spending by states and cities."

We've seen this happen many times in West Virginia, the classical example being the super tax credit program, which a number of coal companies used in order to automate and eliminate mining jobs.

SOLUTIONS. The United States Supreme Court is about to consider a case in which citizens in Ohio are challenging the constitutionality of a $300 million incentive package to DaimlerChrysler.

According to LeRoy, "We must eradicate the subsidy scams that have grown up around the corrupted definition of competition and replace them with a healthy new form of competition in which places compete based on their assets--their skilled labor base, their infrastructure, their schools and universities, their entrepreneurial culture, their quality of life--which are made equally available to all employees."

Bottom line: welfare benefits should go to the truly needy, not the truly greedy.

The Federal Reserve reported last week that family incomes declined nationwide between 2001 and 2004 when adjusted for inflation. A study by the Center on Budget and Policy Priorities released earlier this month found that the gap between the rich and poor is increasing more rapidly in West Virginia than in almost any other state. Further, the income of the poorest 20% in West Virginia is only $13,208, the lowest in the nation.

That's the bad news. The good news is that one concrete measure to improve that situation advanced last Friday in the state House of Delegates. The House Judiciary Committee recommended passage of HB 4023 by the full House. This bill would raise the state minimum wage to $5.85 in June 2006, $6.55 in June 2007, and $7.25 in June 2008. The bill contains exemptions for businesses with six or fewer employees and some occupations. An interim committee of the legislature studied the increase after last year's legislative session.

Marion County delegates Tim Manchin and Mike Caputo took the lead on this issue. A similar bill, SB 146, has been introduced in the state Senate. If the bill is going to advance there, it will have to be soon.

A number of state organizations support the increase, including the WV Council of Churches, the AFL-CIO, the American Friends Service Committee, WV Interfaith Center for Public Policy, the WV Chapter of the National Association of Social Workers, the Service Employees International Union, the Legislative Action Team for Children and Families (an umbrella organization of several family advocacy groups), WV Citizen Action, the Direct Action Welfare Group and many others.

Organizing efforts in West Virginia have connections with the Let Justice Roll Living Wage Campaign, a national effort to raise the minimum wage at the state and federal level. For more information, check www.letjusticeroll.org

It took some doing, but Goat Rope was able to secure an interview with King Lear, lead character from the eponymous play by William Shakespeare. The pre-Christian British king graciously agreed to be interviewed about economic justice issues despite some serious family setbacks. (Note: possibly due to stress from his family problems, Lear tends to speak in stanzas of iambic pentameter.)

GR: Thanks for the chance to talk, your majesty. Since your situation has changed, I understand you have a better sense of what poverty is like. Do you have any comments?

LEAR: O, I have ta'en too little care of this!

GR: Well, at least you understand the issue better now. Do you think poverty is especially rough in winter time with the rising cost of fuel?

LEAR: Poor naked wretches, wheresoe'er you are,
That bide the pelting of this pitiless storm,
How shall your houseless heads and unfed sides,
Your loop'd and window'd raggedness, defend you
From seasons such as these?

GR: Since you've now been in and out of power, have you noticed that people with a lot of wealth and power can literally get away with murder while poor people are severely punished for trivial offenses?

LEAR: Through tatter'd clothes small vices do appear;
Robes and furr'd gowns hide all. Plate sin with gold,
And the strong lance of justice hurtless breaks;
Arm it in rags, a pigmy's straw does pierce it.

GR: You sure talk pretty. No wonder you were--I mean are--a king. Do you have any words of advice for the privileged people of our time?

LEAR: Take physic, pomp;
Expose thyself to feel what wretches feel,
That thou mayest shake down thy superflux to them,
And show the heavens more just.

GR: Thanks again for joining us. Sorry about the whole daughter thing. Talk about a goat rope...

There you have it, Gentle Reader. One question remains. If a largely fictional mad king can figure this stuff out, why can't the rulers of today?