Two to watch and one on crows.

El Cabrero is generally all about reducing prison overcrowding. With maybe a few exceptions.  Apropos of nothing, this story about the Upper Big Branch criminal prosecutions is interesting. Short version: the plea hearing of a former Massey official is being delayed until late February. The official in question is collaborating with investigators. Here's hoping the stuff rolls up instead of down this time. This may be a good sign.

Also, if you live in WV and are tuned in at all to political rumblings, you will have heard some buzz about an education audit commissioned by the governor. This blog post from the WV Center on Budget and Policy sheds some light on where the money really goes.

Meanwhile, calling someone a bird brain may not be much of an insult, especially if the bird in question is a crow.

El Cabrero has always found Jared Diamond to be a writer worth reading. You may recall some of his titles, including Guns, Germs and Steel and Collapse. I'm going to be on the lookout for his latest, The World Until Yesterday: What Can We Learn from Traditional Societies?

Here's an interesting NPR story that features Diamond on the virtues of speaking more than one language.

I would only add that an additional benefit is the ability to cuss in more than one language. Spanish has some great expressions that never had occurred to me, particularly those regarding milk and mothers. I was kinda jealous when I first learned of them...why didn't I ever think of that?

WARRIOR ONE, TWO, THREE...And here's an item on how yoga is helping many combat veterans recover from mental and physical trauma.

FINALLY, TRUST ME. I have brown eyes.

It looks like Congress is stuck on the all drama all the time channel, which means a pretty dismal 2013. Here's an analysis by Robert Greenstein of the Center on Budget and Policy Priorities on the dangers ahead.

DENY THIS. No climate change around here, boss.

RACIAL STEREOTYPES AND CREATIVITY. Pick one or the other. They don't go well together.

Two for the road

The first tries to put to rest the overworked metaphor that links the federal budget to a household budget.

The second suggest ways to jump start the economy now.

Third one's a charm: in case you were Jonesing for an ancient icthyosaur update, click here.

Party on!
by El Cabrero No comments:

Return of the yeti 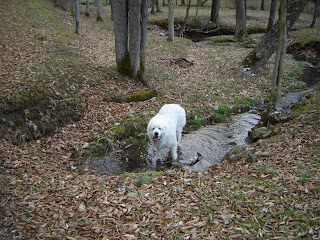 Regular readers of this blog may recall that Arpad (pronounced Arpod), the Great Pyrenees security chief of Goat Rope Farm, hit a rough spell late this summer when he had a disagreement with a motor vehicle. His tibia was broken. Surgery was had but for some reason, the plates didn't hold and the bone broke again, almost coming through the skin.

It was bad. There followed another surgery which involved metal bars going clear through his leg, which led my daughter to call him Franken-Pod. This meant the boy had to be pretty immobile and stay indoors for the first time in his life.

Through it all though, he was the most amazingly patient patient, taking it all in stride. 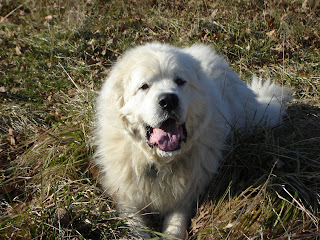 After a while, he started really getting better. We had a scare one night when he got out and ran all over the hills barking at the bad guys like the good old days. We were afraid the leg would break again and he'd return with a blood stump. 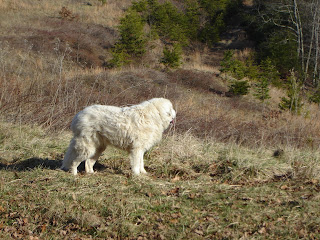 I'm pleased to say that didn't happen. He's now back outside and on duty, taking walks when he chooses, barking at the villains, and surveying his domain, which in his mind is everything he surveys.