I'll never forget when I first heard of Massey Energy's Upper Big Branch mine disaster two years ago today. I was about to start a week long karate seminar in Okinawa.. I was excited because our first teacher was Yoshio Kuba Sensei, a master of the Goju-ryu or hard/soft style, and this was going to be my first formal class in this fighting system.

I checked my email before heading down to ride the monorail to the Budokan (martial arts training hall) in Naha. My daughter, who was doing an internship at a Charleston hospital at the time, sent me an email that said something like "****ing Massey just killed a bunch of people." I felt really strange to be so far away at a time like that, although there was nothing I could have done if I was there.

Early on, it wasn't clear how many miners had been killed. It seemed like early reports on the far side of the world estimated that five or six miners had died. It took some time before the real death toll of 29 miners was established, making it the worst such disaster in 40 years, one that, like the 1972 Buffalo Creek disaster, was "an act of man."

A lot has happened since then, including the "retirement"of Massey CEO Don Blankenship, the purchase of Massey by Alpha Natural Resources, ongoing federal prosecutions, and the release of several reports on the disaster that clearly placed the blame at the feet of Massey executives. Family members and many others are still hoping that prosecutions make their way all the way up the corporate ladder. The latest development in the sad saga is the filing of a lawsuit against Blankenship and other company officials.

Justice is still far from being done in this case. But I hope that's going to change.
by El Cabrero No comments:

El Cabrero is mostly off this week, but I will report on an interesting bumper sticker seen in Vermont. It said:


If ignorance is bliss, why aren't more people happy?

They got me there.

FOR THE PERSON WHO HAS EVERYTHING, how about a flying car?

FINALLY, SOME COOL NEWS. Somebody found a feathered tyrannosaur.

Why didn't I think of this? 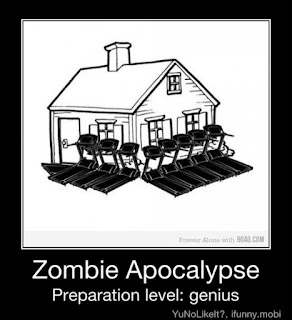 As I mentioned earlier, El Cabrero is taking some time off. I would not, however, leave you, Gentle Reader, without the latest in zombie apocalypse management ideas. The Spousal Unit found this one on Facebook. At once I was struck by its sheer brilliance. Those flesh eating shufflers would just keep slogging along on the treadmill ad infinitum.

This way better than my over-educated daughter's idea of living in trees....unless the power goes out.

JUST ONE LINK. You've probably seen this, but things are looking more and more interesting in the criminal investigation of Massey Energy's Upper Big Branch Mine disaster.