Methinks the human race is kid of wired for ingratitude. We notice when things are bad more than when they're not. How many times does a typical person recognize when he or she doesn't have a toothache and be thankful?

El Cabrero is trying to do better in that department. Last week, for example, my foot suddenly swelled up like a balloon. It was hot and it hurt. I couldn't put a shoe on it. Until then, I was excited about having that knee surgery that allowed me to jog again. But I could barely limp with this.

After looking around on the web, I was convinced I had gout, which apparently isn't just for 18th century aristocrats anymore.

I was not happy.

Then it just went away. I'm jogging again. And gingerly kicking a heavy bag.

I'm grateful today for not having gout. And all the other bad things that aren't happening at the moment.

INEQUALITY. Here's a quick look at why it matters.

SO NOW YOU KNOW. Some millipedes sing.

Email ThisBlogThis!Share to TwitterShare to FacebookShare to Pinterest
Labels: economic inequality, millipedes, pollution, the end of the world

About a year ago, popular New Yorker writer Malcolm Gladwell published an article in that magazine about the limits of social media like Facebook and Twitter in movements for social change.

I was pretty impressed with his argument at the time. If memory serves, he talked about how weak ties such as those from an online community could help in accomplishing some things, these would not be enough when push came to shove. The US Civil Rights movement, for example, relied on strong ties based on trust and commitment.

Then came the events of the "Arab spring" earlier this year and the success of the Occupy Wall Street movement in which social media played a major role. It might be time to rethink Gladwell's argument. Obviously, it's not a case of either/or but social media has turned out to be more of a game changer that I would have expected.

Here's a little anecdote about the impact of social media from the Occupy efforts in Charleston, WV. Yesterday, a wet and miserable day for occupying anything, an official connected with the city apparently came by the Occupy site and told people they'd need to take down their tarps and signs.

Word got out via Facebook right away. People jumped in, made calls, contacted the media, etc. In the end, a compromise was achieved. That's not exactly a case of turning back the tanks but it was interesting.

FRAMING THE OCCUPATION. Here are some suggestions from George Lakoff on messaging for the movement.

THE END OF THE WORLD, AGAIN. Oct. 21 is the latest predicted date for the end of the world. Here's a look a predicted apocalypses of the past. There seems to be a common theme...something about not happening.

OCCUPYING THOUGHTS. Here's the latest edition of the Rev. Jim Lewis' Notes from Under the Fig Tree.

URGENT ZOMBIE WASP UPDATE here. And it's really creepy. This would make one hell of a gross out horror movie if it happened to people.
GOAT ROPE ADVISORY LEVEL: ELEVATED
by El Cabrero 1 comment: We should have expected this given the worldwide outbreak of protests inspired by Occupy Wall Street. The goats here have announced their official occupation of Goat Rope Farm after meeting in a general assembly to prepare their demands. 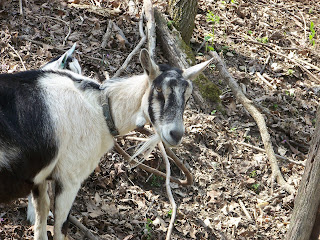 According to Arcadia S. Venus, duly elected spokesperson, who stressed that she was not the leader of the group, "We want grain at least twice a day, plus beet pulp, alfalfa cubes and decent hay. And we demand clean drinking water and a formal acknowledgement that whenever we poop in it it's your fault."

Since these demands have basically all been met, aside from the formal acknowledgement, we anticipate that the occupation will continue indefinitely.

SENSE IS TALKED HERE about the American Jobs Act.

IN CASE THERE'S A BABY IN YOUR LIFE, they learn more from playing than from watching screens.

OK, nevermind what is going on in the world today. Check this out: some scientists believe that giant intelligent kraken-like octopi used to eat dinosaurs in prehistoric oceans and then deliberately arrange their bones.

Since nothing I could write or link could possibly be cooler than that, I'm going to stop right.

Signs of the times 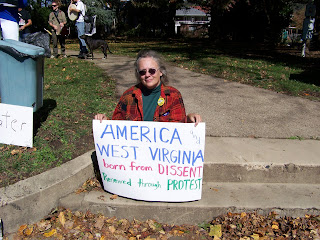 Some interesting signs were on display at Occupy Charleston WV this weekend. 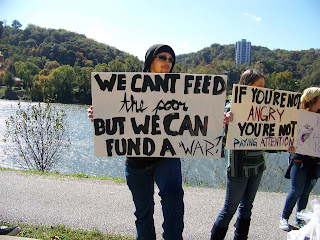 This one asks a good question. 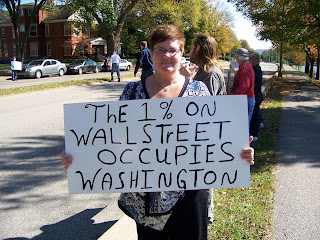 This one is pretty factual. 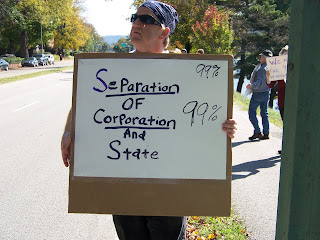 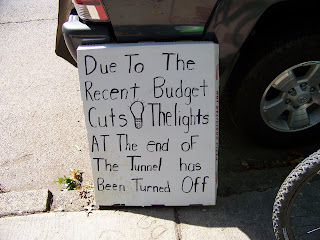 This was one of my favorites. 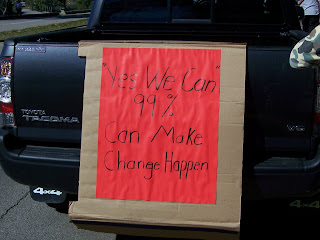 IS AN AWAKENING GOING ON? Could be.

The kids are alright: occupying Charleston 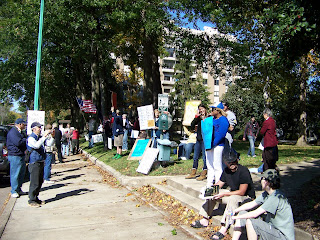 Charleston, WV was one of many cities around the country and the world that held Occupy Wall Street solidarity actions. I attended it for several hours on Saturday. The nicest thing about it was the fact that here was a decent crowd of people gathered together to confront economic injustice--and I didn't know 90 percent of them. 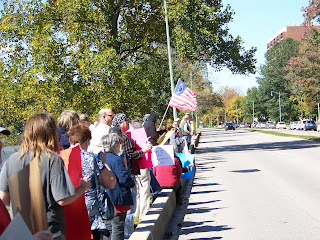 While it was a diverse group, many of the people who participated were young in years, in activism or both. That was good thing. Many members of the initial group that called for the action were young adults, most of whom had never done this kind of thing before. Overall, I'd say that around 200 people were there for some or all of the action. 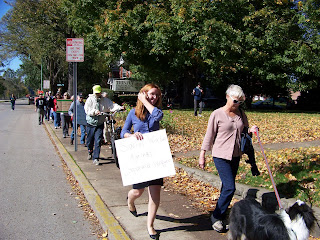 I wasn't able to attend the preliminary planning meetings, but the group made some smart decisions early on to focus on the main message of Occupy Wall Street: the power of corporations and growing economic inequality, rather than getting sidetracked on issues such as mountaintop removal. Issues like that need to be dealt with, but this wasn't the time and place. 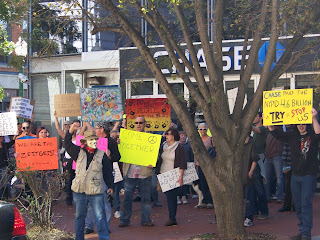 After gathering for a time at a small park on Kanawha Boulevard, the group marched through the city to assemble outside Chase Bank, a protest magnet these days, then marched to the Robert C. Byrd Federal Courthouse. A number of protesters had arranged with the city to camp at Haddad Riverfront Park for the occupation itself and I think plans are in the works for a series of events in the days to come.

The people who pulled this together very quickly did a great job. It was interesting to watch the interactions. Public response was overwhelmingly positive from people driving by. Similar events were held at other places in West Virginia. All told, a pretty impressive day of action, not just here, but all over the place. The challenge in the days ahead will be to find ways of keeping up momentum while also reaching out to more allies and developing a greater variety of actions and strategies.

And, by the way, check out the American Friends Service Committee WV Ecnomic Justice Project's Facebook page here.
by El Cabrero No comments: