You can find the darnedest things on bumper stickers. Recently a friend sent me a couple that were pretty good. One went like this:


No, you can't have my rights, I'm still using them.

Another one went in the direction of theology and etiquette:

I'll be JESUS would have used HIS turn signals.


He probably really would have, you know.

Meanwhile, given all the coal rhetoric around El Cabero's beloved state of West Virginia the following bumper sticker sized slogan came to me:

Whale oil kept the lights on.

That, of course, is a riff on the ever popular "Coal keeps the lights on." I must say in my defense that I'm not trying to be a smartass about this. It is literally true. The whaling industry and the oil harvested therefrom was a major source of lamp oil in the early 1800s. As I understand it, Confederate commerce raiding during the Civil War helped put an end to whaling as a major US industry. Meanwhile other fuels became more practical.

The wheels kept turning. But they used different fuel. Like it or not, the same thing might be happening now. We need to tone down the rhetoric and start thinking about how to deal with this challenge.

I have visited more courthouses this spring and summer than the average career criminal whilst roaming the state to drum up support for a Future Fund for West Virginia (aka a natural resources trust fund). One thing I noticed up north is the way swarms of abstractors and gas company agents are combing through property records looking for suckers to exploit  land owners willing to engage in mutually beneficial natural gas transactions.

The wheels of commerce and all that. But it kind of gave me the creeps. Anyhow, here's a good article from the Daily Mail about the rush on courthouses in Marcellus Shale country.

ON THAT NOTE, Stephen Colbert tweeted this today:

I hope they find water on Mars. That means we'll be able to frack there.


OLYMPIC MOMENT. A hearty Goat Rope congratulations goes out to Kayla Harrison, who became the first American athlete ever to win an Olympic gold medal in judo. The martial art has been an Olympic sport since the 1964 Tokyo games. By way of background, judo grew out of ju jitsu, the samurai's art of weaponless fighting. Judo's founder, Dr. Jigoro Kano, studied various ju jitsu styles, took out the nasty stuff and came up with a sport that was safe to practice while also retaining its effectiveness.

I HAVEN'T READ THIS YET, but you can do it and tell me about it. It's a report from the Congressional Research Service on mountaintop removal mining.

For a future that works

I've written a lot here lately about how West Virginia needs to create a Future Fund from mineral severance taxes to create a permanent source of wealth from non-renewable resources. The idea seems to be pretty sticky, as the expression goes. Here's a report from WV Public Radio on the idea.

REMEMBERING GORE VIDAL. Here's a word from his literary executor. By the way, if you haven't tried them, I highly recommend his novels on American history, beginning with Burr on up through the 20th century.

El Cabrero is a sucker for clever strategies. I am struck with amazement and often a little jealousy whenever I hear about people responding to injustices in creative ways.

I had that feeling again when a friend sent me this item, which describes a funny response to something pretty unfunny, to wit a hate group.

And not just any hate group but the Westboro Baptist Church, a gay bashing litigious group that even seems to give hate groups a bad name. When the group planned an action at a military base (they often target military funerals the same way they do mine disasters as examples of God's wrath for America's alleged toleration of homosexuality), local organizers decided to zombie the group.

According to this Huffington Post item, around 300 people showed up in zombie garb, far outnumbering the approximately eight members of the hate group.

Ordinarily, I think that the Westboro groups is so obnoxious that there is no great need to counter them.  I mean, they even embarrass homophobes. But if you're going to do respond, what better way than to zombie the hell out of them?

GRIN AND BEAR IT. Really. 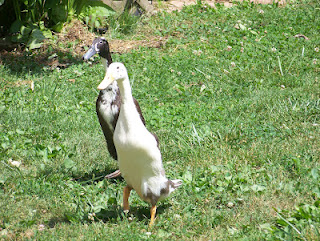 It's always nice to find on returning from a journey that approximately the same number of animals are alive as there were when one departed. We've been lucky the last few trips, but this time not so much. Our two runner ducks, probably the cutest animals on the farm, were killed by a predator, possibly a weasel or skunk. Arpad appears to have been slacking.

TWO FOR THE FUTURE. I've often written here about how WV would greatly benefit by creating a future fund from mineral severance taxes to create a permanent source of wealth for the state. Here's an article on the subject and there is also a Facebook page I encourage you to "like" and check up on regularly.

FISCAL FACTS. I don't always agree with the Charleston Daily Mail's editorials, but this one is right on.

GOOD QUESTION. Why not end poverty?

GOT FIGS? Here's the latest edition of the Rev. Jim Lewis' Notes from Under the Fig Tree.