Recent acts of senseless violence and other forms of trauma reminded me of the ancient Greek idea of miasma, which means something like pollution. The religion writer Karen Armstrong talks about it as a contagious power that “has an independent life of its own.”

Think of it as hazmat.

The Greeks seemed to believe that every act of violence, hubris, cruelty or excess unleashes a bit of miasma on the world. Often the people who unleash it minimize it or think they can control it. They can’t. Miasma isn’t loyal. It bounces. And like a toxic chemical or an infectious disease, it can leak into the atmosphere and water and have effects far beyond the initial point of infection.

Miasma also doesn’t seem to respect borders — even those with walls — or to have an expiration date. The effects of the spiral of violence and trauma (miasma) can continue across continents and generations.

The child who is abused or witnesses abuse may one day abuse. The victim may one day become a perpetrator. The trauma done to a group or individual can have effects across time and space. The eventual target of all this may be random and innocent. It may be us.

One strand of Greek mythology follows the thread of miasma across generations in one family. It started with Tantalus, who for a time enjoyed the favor of the gods. He tried to trick them at a feast by feeding them the flesh of the shoulder of his son Pelops. For this he was punished in the underworld by eternal hunger and thirst. Hence the word “tantalize.”

Pelops, who was restored by Zeus, would later murder his would-be father in law by cheating in a chariot race. He also murdered the person who helped him do the deed. Not surprisingly, the victim cursed him with his dying breath. The curse would play out in the future.

Pelops’ sons were Atreus and Thyestes. They murdered their own half-brother but later had a deadly quarrel, which ended in a horrific act of child murder and cannibalism. Each brother had a son who continued the curse and the conflict in the next generation.

Agamemnon, son of Atreus, led the Greek forces to invade Troy. He sacrificed his own daughter Iphigenia to gain favorable winds for the fleet. While he was gone, his wife Clytemnestra became the lover of Aegisthus, the son of Thyestes, who was born of an incestuous union.

Yeah, it was a mess of extra-biblical proportions.

Agamemnon was murdered by Clytemnestra and Aegisthus when he returned from the destruction of Troy. His son Orestes murdered his mother and her lover and was pursued by the Furies, dark underworld deities who punished crimes against blood kin.

On and on, one thing after another. Kind of like world history.

In the end, as the Greek tragedian Aeschylus tells it, it took divine intervention, rational deliberation and democracy to bring the awful cycle to an end.

The way things are going, we may need all that as well.

The American philosopher Martha Nussbaum finds some lessons for us in all this:

“Greek tragedy shows good people being ruined because of things that just happen to them, things that they do not control. This is certainly sad; but it is an ordinary fact of human life, and no one would deny that it happens ... . Tragedy also shows something more deeply disturbing: it shows good people doing bad things, things otherwise repugnant to their ethical character and commitments, because of circumstances whose origin does not lie with them.”

Things happen to us and to others. We react, not always in the best ways. We get caught up in situations beyond our direct control. The chain of events gets longer. Dominoes fall. Which means more miasma.

Recent research in the field of public health shows that the long-lasting effects of the trauma of things that happened to us or that we get caught up in aren’t confined to mythology. They can occur in much more ordinary ways — often in childhood — but still have long lasting effects.

That’s the bad news. The good news is that trauma isn’t destiny and that there are ways we can help those who’ve suffered from it and reduce the damage that it can do now and in the future. Often these are as simple as a positive relationship with a responsible adult.

I think it would be a huge step forward for us all if we became more conscious of the ways that the effects of trauma can spiral out over time and space — and if institutions such as schools, health care providers, public services, law enforcement, courts and corrections institutions became more trauma informed and adjusted their practice accordingly.

As Albert Camus put it, “We all carry within us places of exile, our crimes, our ravages. Our task is not to unleash them on the world; it is to transform them in ourselves and others.”

(This appeared as an op-ed in yesterday's Gazette.)
by El Cabrero No comments: 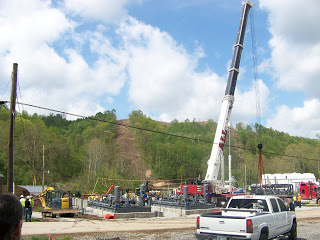 The big news in WV these days is a "game changing" deal with China Energy that could mean $83 billion in investment around shale gas and related developments. I found two different but interesting takes on this news from different parts of the state.

This Gazette piece warns that the deal could doom WV to another century as a mineral colony and could have negative environmental impacts. Closer to the likely point of impact, I found this piece from the Wheeling Intelligencer, which is generally pretty conservative, to be interesting. While not criticizing the deal as such, it warns about the dangers of continuing to rely on one major industry, even a relatively new one.

It even calls for making the Future Fund, which is only on the books at this point, a reality. The idea behind a Future Fund is to set aside a portion of severance taxes to create a permanent source of wealth for WV.

I especially like the idea of investing more in education, or "preparing our children for careers in which they, not anything pulled from the earth, were viewed as the valuable resource."

In any case, I hope WV doesn't make the same mistake in the century to come that it did in the last one.
by El Cabrero 1 comment: