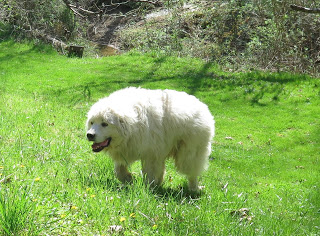 (2017 would have gone much better if Arpad the Magnificent, pictured above, was still around)

Well, year one of America's latest dark journey is about to end. I can't say I'll miss it much.

Greed and hatred triumphant. Fascism and white supremacy's moment in the sun. Sealing the deal on oligarchy. Still there were moments.

In this post, I want to write a bit about how I got through it. I'm interested in your ideas as well. After all, the dark journey isn't anywhere near over yet. So, in no particular order, here goes:

1. Obviously, certain people and animals helped, starting with La Cabrera my partner.
Without her there wouldn't even be goats to name and exploit in this blog. Then there are friends, family (literal and metaphorical) and comrades, with some overlap there. I've been blessed to have a great group of people to work and talk **** with. It's also been a pretty good year for gallows humor.

2. Spy novels. A while back I listened to a lecture series on the history of espionage. The lecturer mentioned some notable fiction on this subject, including the novels of Alan Furst, which are all set in the 1930s and 40s and deal with resistance to the Nazis, which for some unknown reason seemed to fit my mood. I devoured all 14 one after another. He needs to get busy again. (Now I'm on John LeCarre, although I read him more for nostalgia about the good old days of the Cold War, which may not have been what the author was going for.)

3. Hoopla. My local public library, which hasn't been privatized and auctioned off just yet, has this feature by which you can download books (audio and electronic), music, and videos to smartphones and other devices. I go through tons of audiobooks while driving, running and doing tasks that don't take a lot of thought (my favorite kind). With CD books, I was always at risk of misplacing and losing discs, which was a pain. Hoopla changed all that. Hoopla also helped me take a...

4. Wisdom bath. With Hoopla's help I was able to listen to unabridged recordings of Herodotus' The Histories, Thucydides' Peloponnesian War, and Plutarch's Lives. I'd read them all before at least once, but it was nice to pound them down in order. Herodotus's story of the Greco-Persian War, heavy on wonders and tall tales, is a moral study of the dangers of hubris. Plutarch has been mined for 2000 years for lessons and inspiration. His Lives were also the source of several of Shakespeare's plays. Thucydides' no-nonsense account of how a great democracy went off the rails was like a warning.

5. The Resistance. I couldn't believe the size of the Women's March in Washington, in Charleston and around the country--or the many groups springing up around WV and elsewhere which are determined to fight back.

I had the privilege to travel around the state to meet and work with "new" and "old" groups of people committed to social justice from Huntington to Concord to Lewisburg to Parkersburg to Wheeling to Buckhannon to Morgantown to  Berkeley Springs to Charles Town, with plenty of stops in between. To use the language of spy novels (see #1) this meant many more assets to work with.

7. The fights. There were several in the legislature, a few of which were successful. Much of the year was devoted to trying to preserve recent gains in health coverage, particularly Medicaid expansion, which brought coverage to around 175,000 working West Virginians. At first it looked like flat-out ACA repeal was a slam dunk but that didn't happen, thanks to the hard work of people all over WV and the nation. Then there was the #taxscam tax reform fight, which didn't go as well. More fights, starting with CHIP reauthorization, are on their way. It may not have done any good, but I was also lucky enough to have some soapboxes to rant from in the form of newspapers, radio and such.

8. Physical activity. No marathon this year (but watch out, 2018!) but there were plenty of foot miles slogged, not to mention martial arts, yoga and such. I'm especially grateful to my Okinawan karate lineage, which includes legends like Funakoshi, Itosu, Kyan, Matsumura and Sakugawa.

9. Coffee and box wine, for obvious reasons and at different times of day. Oh yeah, and some attendance of Episcopal church services.

10. Myths, stories and ancient teachings. The Buddha on impermanence, insubstantiality and suffering. The Bhagavad Gita on following one's path or dharma: "It is better to fail at your own dharma than to succeed at someone else's." The Norse idea of Ragnarok, a final battle doomed to fail but still worth fighting. Dante's allegory of the need for both human effort and divine grace.

Then there's Tolkien's idea of "eucatastrophe," an unexpected turn of events that brings good news when all seems hopeless. One of those would be nice right about now. Who knows--we might even get one in the new year.