THE RELATIVITY OF MADNESS 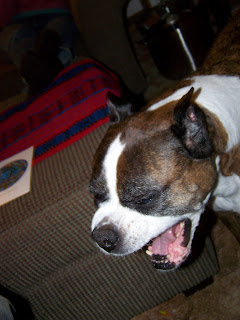 MUCH madness is divinest sense
To a discerning eye;
Much sense the starkest madness.
’T is the majority
In this, as all, prevails.
Assent, and you are sane;
Demur,—you ’re straightway dangerous,
And handled with a chain.--the divine Ms. Emily Dickinson
GOAT ROPE ADVISORY LEVEL: ELEVATED
by El Cabrero No comments: 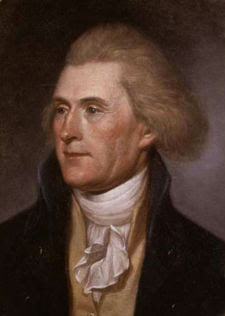 ...and what better way to mark the occasion than with a medley of quotes by Thomas Jefferson, who wrote a certain document associated with this holiday.

Jefferson is widely recognized today to have been a flawed genius, speaking eloquently of liberty while holding slaves (and more), yet he was in many ways the poet of the revolution and an inspiration for many in generations to come who would struggle to expand the nation's promise.

Here's the Goat Rope version of his Greatest Hits, Vol. 1:

I have sworn upon the altar of God, eternal hostility against every form of tyranny over the mind of man.

Enlighten the people, generally, and tyranny and oppressions of body and mind will vanish like spirits at the dawn of day.

The spirit of resistance to government is so valuable on certain occasions, that I wish it always to be kept alive.

I hold it that a little rebellion now and then is a good thing, and as necessary in the political world as storms in the physical.

Conquest is not in our principles. It is inconsistent with our government.

I hope we shall crush in its birth the aristocracy of our monied corporations which dare already to challenge our government to a trial by strength, and bid defiance to the laws of our country.

The general spread of the light of science has already laid open to every view the palpable truth, that the mass of mankind has not been born with saddles on their backs, nor a favored few booted and spurred, ready to ride them legitimately, by the grace of God. 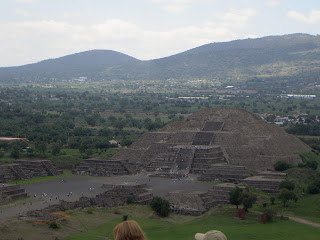 Pyramid of the Moon.

When El Cabrero was a little kid, I used to have a recurring dream (or one that I dreamed was recurring, anyway) about sitting among old stone ruins. Every time I get around some, even little ones, I kind of bliss out.

Visiting Teotihuacan was right up my alley. 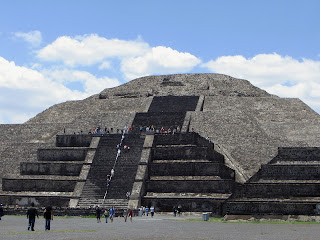 This civilization thrived from a century or two before the common era and peaked around 350-650. At one time, its population was higher than the city of Rome. 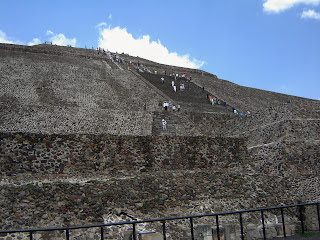 Pyramid of the Sun.

It began to quickly decline in the 7th and 8th centuries for reasons that are still debated, including internal unrest (it takes a ruthless class system to make people build pyramids), invasion, climate change, famine, disease, etc. 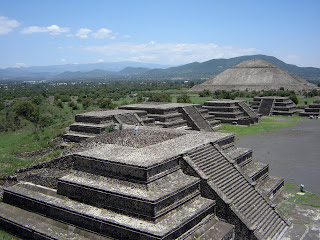 GOT FOOD? Here's another take on the world food crisis by Frances Moore Lappe.

MILITARY FORCE is a blunt instrument for solving the world's problems or protecting national security, according to this item from the Center for American Progress.

CHICKEN OR EGG? A recent study suggests human thought may not follow the same flow as many human languages. Many languages follow the subject/verb/object sequence but when subjects who spoke different languages were given the task of conveying a message with hand signs, most followed the subject/object/verb pattern. Wasn't that the way Yoda talked? Interesting that is...

TLALOC AND TROTSKY AND A LIZARD 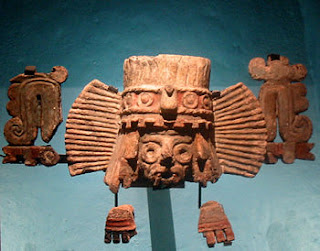 While traveling in Mexico recently, El Cabrero made a new acquaintance and renewed an old one. I encountered the new one while visiting Aztec and pre-Aztec ruins around Mexico City. It was none other than the rain and water god Tlaloc, who had googly eyes and was kind of big on earrings. Quetzalcoatl, the plumed serpent god, gets all the press, so it's high time my wet friend got his due. 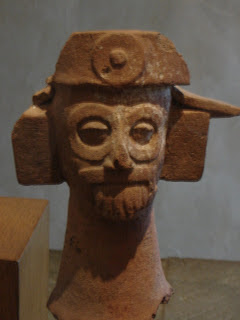 I'm not sure why I bonded with Tlaloc, other than the fact that I think water was one of the universe's better ideas and that his name is fun to say over and over again. His abode was the fourth layer of the heavens, where eternal springtime and lush greenery prevailed. He did however have a certain unfortunate fondness for human sacrifice, a custom to which I am generally opposed. I guess we all have our foibles... 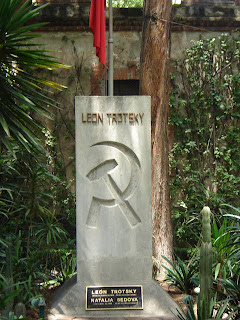 I also paid a visit to the Leon Trotsky Museum in Cocoacan, the site of the fallen Russian revolutionary's last home in exile and of his murder by Stalinist agents. (Leon in his glory days was no stranger to human sacrifice either.) One thing that El Cabrero has in common with Tony Blair and Christopher Hitchens is that we all were impressed at one time by Isaac Deutscher's three volume biography of Trotsky, The Prophet Armed, The Prophet Unarmed, and The Prophet Outcast. While I'm no Trotskyist, one thing I got from those books was an understanding of and a visceral hatred for Stalinism and anything that reeks of it. 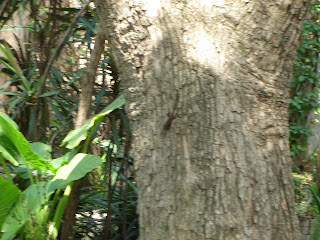 here's a lizard from Leon's garden.

THE PSYCHOLOGY OF EVIL is the subject of this NPR story about the work of psychologist Philip Zimbardo, designer of the classic Stanford Prison Experiment and author of the excellent recent book The Lucifer Effect. You can expect lots more about the latter starting next week.

THE CHANGING OF THE EVANGELICAL GUARD is the subject of this abstract from a longer 6/30New Yorker article. The full article wasn't anywhere I could find it on line, but is definitely worth a look if you find a print copy.

HOW DOES YOUR LIST COMPARE? Here's an item from alternet about the 10 worst moments of the Bush presidency. Jeez, where do you start?

ANOTHER LOOK AT WEST VIRGINIA from the outside. This one is from the UK Guardian.

IS THAT AN AZTEC DEATH WHISTLE IN YOUR POCKET OR... Speaking of meso-American antiquities, here's an interesting item about an eerie musical instrument. 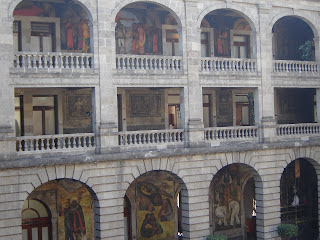 El Cabrero has been aware of Diego Rivera's murals for years, but I was surprised how impressive they were when you get to see the real thing. Duh, I guess it's that way with most things.

I'm sure the Mexican government wasn't all that delighted at the time to see his more revolutionary work on its official walls (the really hot ones are on the third level), but I guess they were good sports about it.

Before we get down to today's business, here are a few that struck me. 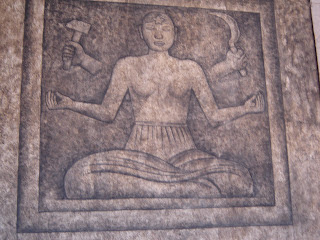 This must be the commie Buddha we ordered. 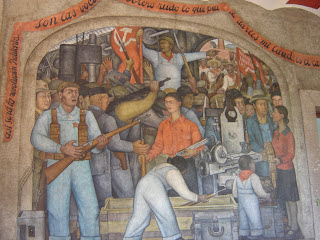 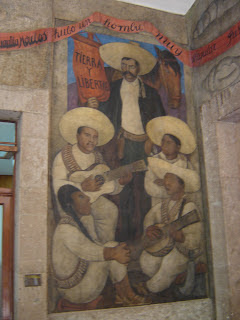 Let us sing of land and freedom. 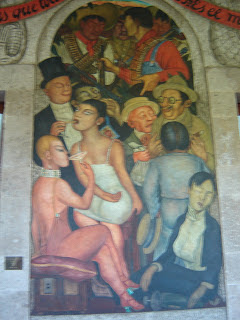 Meanwhile the rich folks party on. 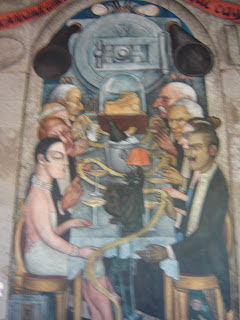 One of my favorites was this Wall Street banquet, where the elite feast on the stock market ticker. Some things change, some don't...

THE BIG ECONOMIC SQUEEZE. A new poll shows that 9 out of 10 Americans are feeling it.

LOSING OUT. African Americans have been among the hardest hit by the housing and predatory lending crisis, as this Nation article attests. According to United for a Fair Economy, the wealth loss for people of color is estimated to be between $164 and $213billion dollars, about half of the total loss for the country.

YOU DON'T NEED A WEATHERMAN to know climate change and extreme weather are connected.

APPALACHIA REDISCOVERED. I don't know about y'all, but I get nervous every time that happens. Here's Newsweek again on the subject. 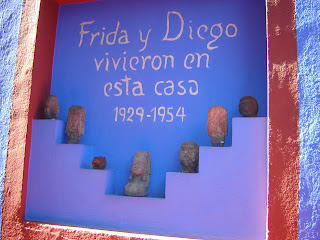 If these walls could talk. Pictures of the home of Frida Kahlo and Diego Rivera.

El Cabrero is back in WV after 10 days in Mexico, split between Mexico City and Oaxaca. There were plenty of things to see and plenty of native speakers for me to torment with my horrible Spanish. Thanks to good farm-sitters, no mass animal graves were required on our return, which was a plus. 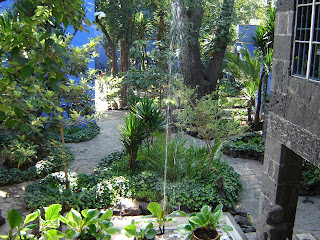 I enjoy traveling but always have this haunting fear that I'll miss something interesting while I'm gone. The great Greek sage Heraclitus said that you can't step in the same river twice, but given the state of some of our rivers, that might not be an altogether bad thing. 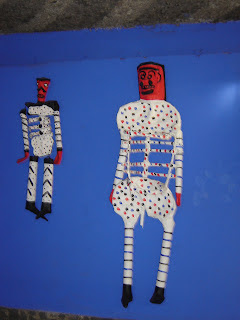 There were several places I wanted to see, one of which was the Casa Azul, home of revolutionary artists Frida Kahlo and Diego Rivera and currently a museum in the Mexico City neighborhood of Coyacan. 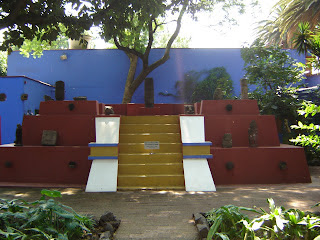 There I learned that every home should have its own pyramid. I've got it on my to-do list.

MISTAKES WERE MADE. A new Army report finds major faults with the early stages of the occupation of Iraq.

CAN WE TRUST OUR BRAINS? Maybe not so much...

A LITTLE GOOD NEWS. Supporters of clean elections will celebrate the state legislature's recent passage of a bill that requires financial disclosure for political ads. A previously passed law was struck down in a court decision.

A LITTLE FORGOTTEN HISTORY was the subject of an op-ed of mine in yesterday's Gazette-Mail.