A WORD FROM THE WISE 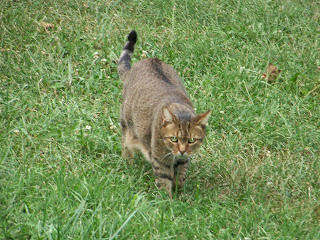 A good soldier is not violent.
A good fighter is not angry.
A good winner is not vengeful.
A good employer is humble.

Lately the theme at Goat Rope has been the need for people who want a less violent world to learn what we can about violence, war and killing. Another way of putting might be to say that choosing to remain ignorant about such things because we don't like them is pretty much the Platonic Form of the Bad Idea.

One thing that seems pretty clear is that most ordinary people have deep resistance to killing other people, especially at close range. Lt. Col. Dave Grossman, author of On Killing, suggests that only about two percent of soldiers take "naturally" to combat without the violence spilling over into their civilian lives. The number of genuine sociopaths who kill without remorse or restraint is even smaller.

One thing that makes killing easier is distance, broadly conceived. Artillery crews, snipers, airborne bombers and sailors engaged in naval warfare seemed to have less battlefield trauma and less resistance to firing than infantry fighters at a closer range who can see, hear and sometimes touch their adversaries.

In our age of high tech mass killing from miles away, this kind of killing has become commonplace, which means that killing is easier.

As Grossman points out, killing from a distance is anonymous. Further, when done as part of a socially sanctioned group in which each person only carries out a small defined task, this seems to convey a kind of group absolution on those who do the killing but never see it.

There are other ways that distance makes killing and violence easier, but that will have to keep until next time.

STILL TRAVELING. Usually during the week, this blog has links and comments about current events. That feature will resume Monday.

BEYOND FIGHT OR FLIGHT

Cats posture. So do we. This one's from wikipedia.

Most of us have heard at one time or another that humans, like many animals, go into fight or flight mode when under stress or attack. But when you really think about it, those aren't the only two options, nor are they the most common.

As Lt. Col. Dave Grossman points out in his book On Killing, in most kinds of intra-species aggression, fight or flight usually turns into posturing and submission. Two bucks with butt antlers and one will give in without any being killed, etc., etc., etc. Two dogs or wolves or monkeys fight until one performs a submission ritual.

Many times, the animals involved will just make threat postures and Bad Noises to each other until the opportunity occurs for them to go their separate ways with dignity intact.

When El Cabrero was a teenager, I remember that a huge number of people had pledged to kick another person's @$$. The ratio of threats and posturing to actual @$$ kicking was probably close to 100 to 1.

Nor is posturing limited to those threatening physical aggression. I've known some pacifists who were really good at it too, although they were mostly trying to display righteousness.

A lot of actual warfare consists of posturing. Yells, intimidating weapons, exhibits of prowess or firepower are often used to persuade another side to back off, run, or give up. But posturing pervades the political, business, non-profit, and private world as well. Most of the critters at Goat Rope Farm do it all the time.

Probably one reason why most normal people have deep resistance to actually harming another person--especially at close range--is that posturing has worked so well for so long.

In fact, many kinds of primitive warfare were more about threats and posturing designed to make a foe retreat than about wiping out the enemy. This is one reason Native Americans were unprepared for European style warfare.

Current high tech warfare and desensitization to violence have reduced the element of posturing in warfare and increased the actual carnage.

UNLINKED. El Cabrero is still on the road so the links and comments aren't up today. That feature will return Monday.

Continental artillery crew from the American Revolution, by way of wikipedia.

The good news about war and killing, to the extent there is any, is that most people--even professional soldiers--don't like to do it and will go to considerable lengths to avoid it, especially when it's up close and personal. That's one of the key findings of Lt. Col. Dave Grossman, author of On Killing: The Psychological Cost of Learning to Kill in War and Society.

During World War II, often recalled as "The Good War," US military officials discovered to their dismay that only 15-20 percent of soldiers in the line of battle actually fired their weapons, even in engagements that lasted for 2-3 days--even when opposing troops were firing away at them.

Close investigations of battles in the US Civil War have indicated that many soldiers in close engagements fired over the heads of their opponents. There were even reports of soldiers continually re-loading their muzzle loaders without firing them.

Armies have spent countless hours since the 1600s training soldiers on bayonet combat, but studies of actual hand to hand fighting in warfare have found that these are seldom used in even the closest combat. Instead, most prefer to wield the rifle as a club. Most people don't like to disembowel others even in close combat.

However, experience has shown that this resistance can be overcome either by killing from a distance, which is typical of modern warfare, or by careful training and conditioning.

Conditioning people to overcome resistance to killing typically consists of making training more realistic. In the WWII era, soldiers were trained to shoot at bulls-eye targets. This was changed to make them look more like people, in effect desensitizing trainees to killing. By the Korean War, the firing rate was up to 55 percent and by Vietnam, it was 90-95 percent for American soldiers.

Grossman argues that this desensitization, which also occurs through realistic violent video games, leads to "Acquired Violence Immune Deficiency." Some may argue whether such games contribute to real violence, but a disturbing trend in our post-modern world is not only that video games become more warlike, but hi-tech war has become more video game-like.

These two trends, especially taken together, seem to have the effect of making killing easier.

LINK IMPAIRED. El Cabrero is traveling this week with limited internet access. If anything really bad happened, please accept my condolences. If it was good, congratulations. 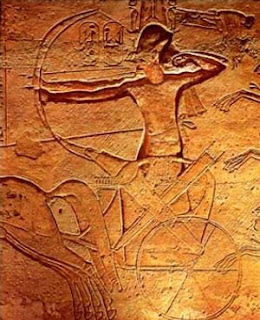 Believe it or not, El Cabrero used to be a Boy Scout. And as such I remember the old Scout Motto: Be Prepared.

I can't say I always am but at least I make it a practice to take a book with me when I go out the door. After all, anything can happen and one could wind up stuck someplace for a long time.

Lately I've gotten some strange looks about a book I've been carrying around. Maybe it has something to do with the title: On Killing: The Psychological Cost of Learning to Kill in War and Society by Lt. Col. Dave Grossman, a former Army Ranger and paratrooper. The subtitle is really small so all people see is the On Killing part, which may lead some to think I'm interested in a how-to book on the subject.

For the record, that is not the case.

Actually, Grossman's book is about the resistances most ordinary people have to killing another person at close range and how societies and governments condition people to overcome those resistances. It also deals at length with the psychological damage often suffered by people who have committed violence. As such, it's an important book for people who want to make the world less violent (see yesterday's post).

Over the next few days, I'm going to highlight some of the insights from the book. Stay tuned.

LINK IMPAIRED: El Cabrero is traveling this week with very little internet access. The link features will return when possible. Having said that, did y'all see the Massey Energy/Don Blankenship story on ABC News yesterday? It was also on Nightline. I tried to find a link today without success. My guess is you'll be able to find a link at some point today at Lincoln Walks at Midnight. 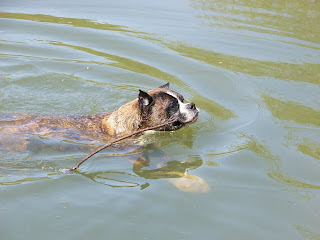 Caption: This man went down by the riverside but didn't know when to quit.

On the fifth anniversary of President Bush's unnecessary war in Iraq, like thousands of other Americans, I attended an anti-war gathering. It was a good event. The previously threatening skies cleared up and the weather was warm. At one point, someone sang "Down by the Riverside."

As you no doubt recall, Gentle Reader, the chorus says "I ain't gonna study war no more." It's catchy, easy to sing and easy to plunk out on a guitar for those so inclined.

The only problem is this: if you take it at face value and think about it, it's really bad advice for people who want to make the world less violent and more just.

I've ridden this hobby horse before here, but here goes again. I suspect that many people involved in peace or anti-war movements have felt this way: war and violence are bad and therefore not to be studied. That may be Reason # 59385 that such movements haven't exactly set the woods on fire (metaphorically speaking).

Again, can you imagine what the current state of medicine or public health would be if people didn't study diseases and injuries because they are "bad"?

That is one of two kinds of popular magical thinking. It involves ignoring things we think are bad and don't like. The other kind, as in The Secret, a New Age idea taken up by Oprah a while back, holds that if we think about things we want, we just might get them.

(Note: the second of these is preferred by the animals at Goat Rope Farm. When they want something they stare at it--and sometimes it works.)

Both kinds of magical thinking have their problems, but at least the second one might actually work every once in a while. At least if you think something is possible you might be more aware of opportunities for making it happen. But ignoring unpleasant realities has a much worse track record.

One of the best chances we have for reducing violence, warfare, killing and the conditions that contribute to them is to try to learn as much as we can about them and creatively apply that knowledge as we seek their reduction and--one can dream--eventual elimination.

BREAKING THE BANK.James Surowiecki, financial writer for the New Yorker, has some interesting things to say about the credit crisis and ill-advised changes in bankruptcy laws.

STRESSED OUT. The stress of repeated tours of duty in Iraq is causing concern in the Army.

OH GOOD. Blackwater got its Iraq contract renewed. That should win some hearts and minds.

EVERY MOUNTAIN SHALL BE BROUGHT DOWN. The United Mine Workers of America may be open to the long term goal of ending mountaintop removal, according to this article by Ken Ward.

COURT FIASCO. Here's the Wall Street Journal legal blog on the Blankenship/Benjamin WV supreme court mess. Also, check out ABC News today. At last word, they were planning on showing the video of a scuffle between a reporter and supreme court I mean Massey CEO Don Blankenship.

CHIP. Here's an op-ed by yours truly on the need to expand the Children's Health Insurance Program.