Here's a bit of weekend reading matter that is well worth your time from my friend Elizabeth Gaucher's Esse Diem blog. It's about many things, including parenthood, "the baby tunnel" (I love that concept), and the fact that there is a mean spirited-ness in the land that typically manifests itself in taking potshots at disadvantaged people.

The title of her post is Waking Up with a Stranger. And, yes, it is a metaphor.

P.S. Watch the news this weekend, laddies and lassies! Occupy Wall Street solidarity actions are going to break out all over the country and at several places in El Cabrero's beloved state of West Virginia.
by El Cabrero 3 comments: 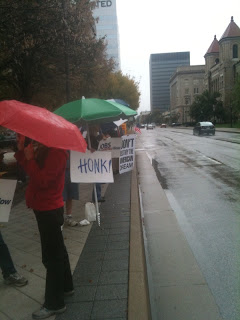 I'm not sure what's causing it, but some things are starting to change. First there was the Occupy Wall Street movement, an ad hoc event that kept on happening. Then similar actions spread around the country.

Occupy Huntington in WV has been going on for nearly a week. Related events are planned for Saturday in Charleston and other WV towns, in addition to dozens and maybe hundreds around the nation and world.

Labor unions have not only expressed support for the Occupy movement but have also initiated numerous actions of their own around the country, including a jobs rally last night in Charleston.

Another ad hoc crew assembled in Charleston Thursday on a rainy lunch our to hold signs calling for job creation. Among those who attended were members of the Laborers union, MoveOn supporters, and representatives of the National Association of Social Workers, WV Citizen Action, the American Friends Service Committee and other labor friendly organizations. Mary Hill and Diane Parker, both members of the Laborers International Union of North America, took the lead in organizing the event.

I'm still not sure whether this is a flash in the pan or the start of something big, but it would be nice to think that people were losing the inclination for servility and the habit of groveling at the feet of a plutocracy.

ANOTHER TAKE. Here's economist Jeffrey Sachs of Columbia University's Earth Institute on the Occupy Wall Street protests and the issues driving them.

CORPORATIONS AND PEOPLE. Sorry, Mitt, but not everyone is convinced they are one and the same. 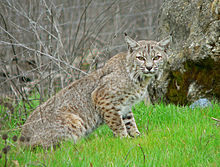 The holler in which Goat Rope Farm is situated is pretty rich in living things. Yesterday's post featured a giant puffball, just one representative of its happy fungus population.

When we first moved here 8 years ago, there were no squirrels. Now they're all over the place. Deer are plentiful--so plentiful I'm hopeful that Artemis, goddess of wild things and the hunt, will spare one for me this fall. Wild turkeys are everywhere too. Coyotes often howl at night, which puts Arpad, our Great Pyrenees on high alert. Blue and green herons show up from time to time when the creek is full of minnows. The other day we saw a red fox on a walk.

But this weekend, we had a special treat when we spotted a bobcat. From various signs, we thought there were some around here, but it was quite a thrill to get a look at one. Of course, bobcats are masterful predators and we have chickens and such. I hope it finds other food but would somehow begrudge a big kitty less for a chicken or two than a neighbor's dog or a possom or raccoon.

Next up: maybe a bear?

DOING THE NUMBERS. This series of charts shows what the Wall Street occupiers are so upset about. If you click on the link, you will find a picture of a protester with a sign containing profanity, but the bulk of the article is about statistics on economic inequality.

NOTE: THE LINK TRUCK BROKE DOWN TODAY. That's all we've got. 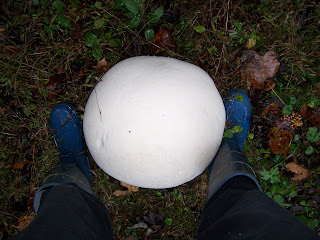 Say what you want about 2011--it's a great year for puffballs. The spousal unit photographed this fungal monstrosity this weekend. The boots provide perspective if you can make them out. We're talking bigger than a basketball. Luckily, it hasn't started talking and eating people yet.

We interrupt our regularly scheduled programming for a personal announcement: my daughter earned her shodan (first degree black belt) in karate this weekend. It occurred to me that I got mine the same year she was born.

She's been around it her whole life but for some reason got seriously into it a few years back. A lot of people approach it as a sport or fitness activity, but I recommended she approach it in a traditional way, as a serious fighting art and classical budo or martial way. She did, applying fiercely the admonition of Shotokan karate master Gichin Funakoshi, who had this to say about practice:

Be deadly serious in your training. Your opponent must always be present in your mind, whether you sit or stand or walk or raise your arms. Should you in combat strike a karate blow, you must have no doubt whatsoever that the one blow decides everything. If you have made an error, you will be the one who falls. You must always be prepared for such an eventuality.

She brought that serious attitude to her form or kata practice, prearranged solo exercises in which one executes techniques in multiple directions against imagined opponents. She also proved to be quite a predator in kumite or sparring. In practice, she would only spar with toughest and best she could find, duking it out with black belt men who outweighed her by half or more.

When she did compete, she generally dominated the ring, often kicking her opponents out of it. She once said that I seemed prouder of her when she did that than when she got her doctorate. For the record, that isn't necessarily true. But it might be.

WHAT HE SAID. Here's Paul Krugman on the ruling class hissy fit over the Occupy Wall Street movement.

THE POLITICS OF OCCUPATION. Here's Robert Reich on the Wall Street protesters and the Democratic party.

THEY'VE GOT BEN AND JERRY'S anyway. 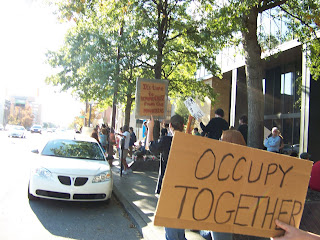 The Occupy Wall Street solidarity movement officially hit West Virginia this weekend in Huntington. Organizers, many of whom were connected in some way with Marshall University, planned to begin rallying outside Chase Bank on Friday evening, stay there until Sunday, and finish with a march. 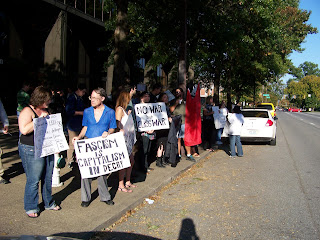 I stopped by for a couple of hours on Friday and there might have been as many as 100 people, if you count comings and goings, which in my experience is a good number for Huntington. I'm sure the number of hardy souls who camped out on the street was smaller, but it seems like they had a good support system organized and I'm not aware of any conflicts with the police. 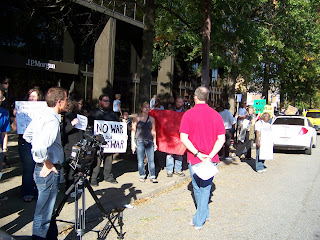 There seemed to be a wide variety of people with many viewpoints, united by a concern for growing inequality. The event also seemed to provide an opportunity for people who have never engaged in this kind of activity before. I'd never seen most of the people who participated before and I've done a thing or two in Huntington over the years. It's hard to say how many more events will happen in WV or around the country but this is something I didn't see coming.

I think the movement will be stronger if it sticks more closely with the 99 percent message rather than covering the map of issues. A populist economic message could really resonate in southern West Virginia--if people can avoid getting sidetracked with coal controversies. Those issues need to be dealt with, but this probably isn't the best venue. Just saying.

LOOKING AHEAD. Here's an op-ed by yours truly on economic policy options for WV.

AFGHANISTAN. Here's a statement from WV Senator Joe Manchin on the 10th anniversary of the war in Afghanistan. Sample quote:

"As I have said before, we must choose between rebuilding Afghanistan and rebuilding America because we can’t afford to do both. And I choose to rebuild America.”