A Second Bill of Rights

In the United States, people talk a lot about rights and freedoms. Often, however, the discussion is narrow in scope, as in freedom from external constraints or the interference of others. Thinkers such as Erich Fromm have referred to this concept as “negative freedom” for “freedom from.”

While these freedoms are important — some are inscribed in the Bill of Rights — they are incomplete. Positive freedom, sometimes called “freedom for” or “freedom to” is about the ability of people to act freely and develop their potential. It also implies the right of people to meet their basic needs as members of the human community.

He called for a “Second Bill of Rights,” which would guarantee all Americans the right to such basics as employment, a living wage, education, health care, leisure and security in the event of sickness, age or disability.

Twenty years after the U.N. declaration, the Rev. Martin Luther King Jr. renewed Roosevelt’s call, saying that “We need an economic bill of rights. This would guarantee a job to all people who want to work and are able to work. It would also guarantee an income for all who are not able to work. Some people are too young, some are too old, some are physically disabled, and yet in order to live, they need income.”

The original Poor Peoples’ Campaign that King and allies initiated 50 years ago aimed to make those rights a reality.

And that’s why the people and organizations from across America are participating in a revived Poor Peoples’ Campaign, which describes itself as “A National Call to Moral Revival.”

It’s past time to make those rights and freedom a reality.

In West Virginia, we have a long tradition of fighting for those rights — and sometimes winning. That tradition reaches from the Great Rail Strike of 1877, which spread from Martinsburg across the nation, to the Mine Wars of the early 20th century to the Black Lung Movement of the 1970s to the W.Va. Teachers’ Strike of 2018, the ripples of which are still spreading across the nation. It’s a record to be proud of.

(This appeared as an op-ed in the Charleston Gazette-Mail.)
by El Cabrero 1 comment:

The north wind and the sun 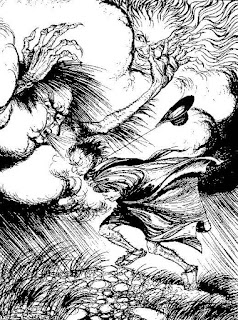 It's long been noticed in the art of strategy and of life that sometimes the more we try to push something, the more others want to resist it. And that overly aggressive actions tend to backfire and/or have unintended consequences.Several of the "soft" martial arts are based on that understanding.

Last night as I was driving home at the end of a long day I started listening to Aesop's Fables courtesy of my local library. One that stuck in my mind was the fable of the north wind and the sun.

THE WIND and the Sun were disputing which was the stronger. Suddenly they saw a traveler coming down the road, and the Sun said: “I see a way to decide our dispute. Whichever of us can cause that traveler to take off his cloak shall be regarded as the stronger You begin.” So the Sun retired behind a cloud, and the Wind began to blow as hard as it could upon the traveler. But the harder he blew the more closely did the traveler wrap his cloak round him, till at last the Wind had to give up in despair. Then the Sun came out and shone in all his glory upon the traveler, who soon found it too hot to walk with his cloak on.

You could also say the moral was that persuasion works better than compulsion.Or that unskillful actions and arguments can make others cling even harder to problematic behaviors and beliefs.

The Tao Te Ching, the ancient Chinese classic of philosophical Taoism advocates wu wei or non-action as opposed to aggressive action. It doesn't mean doing nothing but it does mean acting in ways that are timely and appropriate rather than forced. Think sun versus wind.

“Tao abides in non-action.  Yet nothing is left undone”

“He who acts defeats his own purpose;  He who grasps loses.  The sage does not act, and so is not defeated.  He does not grasp and therefore does not lose”

Take it from Aesop or from Lao Tzu, any way you look at it, that one has a lot of applications.
by El Cabrero No comments:

So feeding kids is bad? If you want to sample just a little of the meanness in the air today, check out this letter that appeared in the Parkersburg WV newspaper opposing providing breakfast and lunch to all students in Wood County:

Well, how many times have you heard the cliche that there is no such thing as a free lunch? It certainly applies here. So someone is going to give the Wood County School system all the food to feed Wood County students breakfast and lunch? It would be nice for this newspaper to acknowledge who this kind person or company is.

On second thought, I’ll go out on a limb and say that the taxpayers of the state and nation are footing this program (CEP). Just a minor detail that is probably not important.
The CEP (Community Eligibility Provision) is a program for free and reduced priced meals in high poverty areas. If at least 40 percent of a school’s students are directly certified for free meal benefits, the entire school qualifies for the option.

The article also quotes the new superintendent William Hosaflook as follows. “I am proud that Wood County Schools will be participating in the CEP program to help meet a critical need for many students in our county.”

Mr. Hosaflook, I am extremely disappointed and somewhat embarrassed that Wood County qualifies for such a program. At what point do we say enough is enough that the nanny state has to feed our children. Once an “entitlement” has started, it is very, very difficult to take it away.

Where do you even start with this? God forbid we improve child nutrition, reduce stigma and discipline problems, and enhance school performance with good nutrition.

Whenever I hear someone like that suggest that feeding kids is socialistic, I'm tempted to point out that the whole public education thing kind of is too. But I don't want to give them any ideas.

A friend of mine replied to the letter on social media with the following snark/irony:

You guys think the free meal thing is bad? It turns out, those kids are getting an education for free too! I say "free" but I think we all know who pays for that. Us hard working tax payers, that's who. Why don't these dead beat parents just send their kids to private school? And we even cover the cost of the roads to take these entitled crumb-snatchers to their gilded "free" schools, and their parents to jobs and stores and such!

Look in to it! It goes so much deeper. Libraries, health departments (why can't people research the sanitation of their local restaurants or stop communicable diseases on a community level on their own?), fire departments and even police services all funded by tax dollars and provided to everyone. I mean, what kind of society do we want to live in, people?

I really like the "crumb-snatchers" part. And the fact that the opposition lost.

It took a while, but all public school kids in Wood County can eat for free.