Thoughts on geeking out 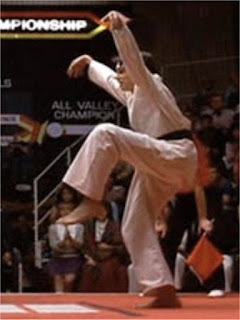 Geeking out has been defined, at least by way of Google, as freaking out over something that others think is geeky. I don't think everyone geeks out over something, but I feel kind of sorry for those who don't.

I admit to being a promiscuous geeker, meaning that I geek out on several things, ranging from martial arts to ancient Greece to critical theory, among other things.

I've noticed that people who geek out often like to geek out about movies about the object of their geeking. For example, when I was on the local volunteer fire department, our guys would laugh at the inaccuracy of firefighter movies...but they were glued to the screen and probably teared up at the appropriate moments (not that they'd ever admit that to anyone).

I'm in that boat when it comes to karate, and particularly movies and TV shows like The Karate Kid and Cobra Kai, the contemporary version of the story. While the karate techniques in this are only marginally like the real thing, the spirit of Mr. Miyagi is pretty close to the spirit of Okinawan karate, which in my opinion covers a multitude of sins. And the solo forms or katas shown are based on real ones, although they were generally mangled.

In this age of Brazilian jiu jitsu, Muay Thai and mixed martial arts, karate is as retro as analog watches, vinyl records and cell phones that are just phones. Still, it's my thing.

The movie and show are comically inaccurate as far as what it's really like for some of these reasons:

*First of all, the flashy techniques. Anyone who is dumb enough to try the crane technique (pictured above) really doesn't deserve to have intact ribs. And, while balance is good, spinning hook kicks on trees has limited application.

*Second, the training methods are hilariously unspecific. I seem to recall that the late great Bruce Lee said, "If you want to develop your punch, punch!" Instead, these movies emphasize waxing cars and painting fences and hanging clothes. You get good at what you practice. Exactly that.

*Third, it's amazing how many people become expert fighters if not black belts in a few lessons. It took most of the people I know several years. It's almost like downloading martial arts styles on The Matrix movies. If it was easy, it would be cheating.

*Fourth, I've done this stuff off and on for much longer than the median age of contemporary humans (without ever getting really good at it). I cannot recall a sensei or a senior show me a cool technique. Mostly they make you drill on the same dull, extremely non-flashy boring stuff you were first shown early on. You also have three really close friends: tiredness, boredom and pain.

Having said all that, I was glued to Cobra Kai like a fly on....whatever flies enjoy close proximity to. I can hardly wait for the next season.

To paraphrase book of Ecclesiastes in the Hebrew Bible or Christian Old Testament, "Whatever your mind finds to geek on, geek on it with all your might, for there is no work or thought or knowledge or wisdom or geeking in the realm of the dead."

A new partnership called “Second Chance Program” was announced between the Kanawha Institute for Social Research and Action (KISRA) and the Charleston Police Department (CPD) that hopes to provide more opportunities for people leaving prison.

As the Charleston Gazette-Mail reported, Corporal Errol Randle with the CPD pointed out that most people in prison eventually return to our communities, and so we must ask ourselves, “What are we doing to help them be successful when they get back here?”

This partnership is good news for Kanawha County and Randle’s question is an important one. What more can we do to help people succeed after they exit our prison system and re-enter our communities?

One way the Legislature could have a big impact statewide would be to affirmatively pass legislation to opt out of the federal ban that was passed as part of the Personal Responsibility and Work Opportunity Act in 1996, better known as welfare reform.

This ban that passed with welfare reform means people convicted of felony drug offenses are barred for life from obtaining food assistance through the Supplemental Nutrition Assistance Program (SNAP).

Twenty-eight states, under both Republican and Democratic leadership, moved swiftly after the 1996 law’s passage to opt out, by eliminating or softening the ban, and the majority of states eventually followed suit.

With our substance abuse crisis at epidemic proportions, and an ongoing reliance as a society on criminalizing addiction instead of treating it, more and more people in West Virginia are subject to this ban every year.

And ironically enough (or is it tragically?) West Virginia is among only six states that have neither eliminated nor modified the ban.

The effect of this ban has sweeping consequences on an individual’s life chances, as well as on their families.

Recently, I have had the privilege of sitting down with formerly incarcerated people and hearing their stories as part of the West Virginia Criminal Justice Listening Project. Without exception, the lack of access to stable employment or to public benefits, or both, are two of the greatest hindrances to getting one’s life back on track after serving time in our state’s prisons.

“Serving time” is a misleading expression, because it suggests that a person is only serving time when confined behind the walls of a prison. The harsh reality is that people continue to “serve time” by being denied food benefits, professional licenses and housing, as well as being subjected daily to the social stigma attached to a criminal conviction.

A survey of formerly incarcerated people conducted by the Center for Economic and Policy Research suggests that barely over half of people are unemployed a year after release and that people with a felony conviction face much higher scrutiny in the hiring process.

Then the Bureau of Justice Statistics just released a report in May that found that 68 percent of released state prisoners were arrested within three years of release.

Listening to the stories behind the statistics, one man described trying to find work to pay for food after 10 years of incarceration and said, “It was like running my head against a brick wall. And once I got custody of my son, I was like, ‘I know how to make money,’ so I was right back out there [selling drugs] again.”

Call me crazy, but perhaps there is a causal effect between recidivism and barriers to food, housing and employment.

Fortunately, there are policies that the West Virginia Legislature can consider that would reduce recidivism by removing the myriad of collateral consequences people face when they leave prison with a felony on their record.

To start, we could stop denying food assistance to tens of thousands of West Virginians because of the mistakes they made. If there is another common refrain I hear from people during these interviews, it is that they don’t feel like the person they were when they were in active addiction, and that they deserve a second chance.

Consider what one interviewee said: “People can change. If they’re not given a chance to move forward, how are they going to move forward? If they can’t move forward, what are they going to do? I think that is vital to long-term recovery that they have a chance. I can change all I want, but [if] I don’t have any opportunity, I’m going to go back to what I know. The fact that I’m doing what I was supposed to be doing my whole life, I need a chance. And people don’t give chances, they just don’t.”

I know he hopes to be proven wrong and that we decide as a state to believe in, and invest in, second chances.

(This op-ed by AFSC's Lida Shepherd appeared in yesterday's Gazette-Mail.)
by El Cabrero No comments: