It takes one to praise one 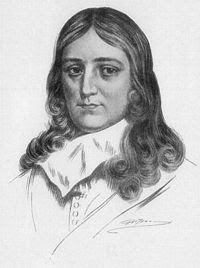 I'm in the middle of a Shakespeare jag here at Goat Rope but decided to let poet John Milton have a say about the matter for this weekend's poetry selection. This is his "On Shakespear"--

WHAT needs my Shakespear for his honour'd Bones,
The labour of an age in piled Stones,
Or that his hallow'd reliques should be hid
Under a Star-ypointing Pyramid?
Dear son of memory, great heir of Fame,
What need'st thou such weak witnes of thy name?
Thou in our wonder and astonishment
Hast built thy self a live-long Monument.
For whilst toth'shame of slow-endeavouring art,
Thy easie numbers flow, and that each heart
Hath from the leaves of thy unvalu'd Book,
Those Delphick lines with deep impression took,
Then thou our fancy of it self bereaving,
Dost make us Marble with too much conceaving;
And so Sepulcher'd in such pomp dost lie,
That Kings for such a Tomb would wish to die.--John Milton, 1630 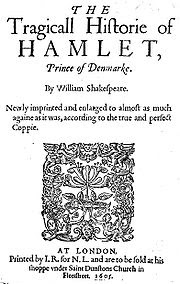 El Cabrero is in Shakespearean mode lately with a special emphasis on Hamlet. As mentioned earlier this week, self consciousness has been a major theme of the "modern" period, which as strange as it may sound is often considered to have begun around 1500. You can see it in paintings (like Las Meninas), in literature (like Don Quixote) and even in philosophy (Descartes' "I think, therefore I am").

Hamlet himself has got to be one of the most self conscious characters in all literature (with the possible exception of Spider-Man). This shows up in all kinds of ways, the most obvious being his long solitary speeches or soliloquies.

I find it interesting that Shakespeare has him before the action of the play studying at Wittenberg, birthplace of the Luther's Reformation (Protestantism is all about individuality and self-consciousness). Like Horatio, he has obviously been trained in philosophy, although he admits that there are more things in heaven and earth than it might imagine.

This shows up particularly in his capacity for self doubt. Even after seeing his father's ghost in the presence of witnesses on the battlements in the beginning of the play, he continues to question its veracity. As he says in Act 2, scene 2,

The spirit that I have seen
May be the devil, and the devil hath power
To assume a pleasing shape; yea, and perhaps
Out of my weakness and my melancholy,
As he is very potent with such spirits,
Abuses me to damn me.

I've always found one of his most endearing traits was the fact that he knew he might be wrong, although he might have taken it too far. Hamlet may have had a bit too much self consciousness and self doubt, while George W. Bush could have used a bit more. The Golden Mean is difficult to attain.

ONE DOLLAR/ONE VOTE. The US Supreme Court overturned a previous ruling on contributions to political campaigns.

HEALTH CARE. It looks like the US House won't pass the Senate version of reform.

BIT THE BULLET. Krugman's latest op-ed urges the House to do just that.

WHATEVER HAPPENS, here are 10 things you can do to improve your own health care.

IN THIS CORNER...Here's coverage from the Charleston Gazette about a debate between Massey Energy CEO Don Blankenship and environmentalist Robert F. Kennedy Jr. By an odd coincidence, two giants who divided the literary firmament in the early modern period died on exactly the same day (April 23 1616). I'm referring to Miguel de Cervantes Saavedra and William Shakespeare.

Cervantes, born in 1547, was the older. Shakespeare's birth date is unknown but he was baptised in 1564, most likely soon after birth. Cervantes seemed to have the rougher road in life, being on occasion a soldier, captive of pirates, tax collector and prisoner.

Both have one thing in common, aside from being among the greatest writers and artists of all time. Their work embodied the kind of self consciousness that scholar Jacques Barzun described as a characteristic of the modern era. Yesterday's post looked at an artistic example of this in Velasquez' painting Las Meninas, in which he inserted himself.

In Cervantes' masterpiece, you can see this in the Second Part of Don Quixote, when the Knight of the Sorrowful Countenance (aka the title character) and his trusty squire Sancho find out that they are literary characters in someone else's book--and they are none to happy about it.

In Hamlet, the something similar happens with the players visit Elsinore and Hamlet gives them instructions on acting. At one point in the play, there are (real) actors portraying actors who are portraying other people in a play within the play.

Those are just small examples of the things that make such works interesting and durable.

PLAN C. In the wake of Tuesday's election, a scaled-back version of health care reform may be the next option.

WHAT NEXT? Here is one of many takes on what this means for the Obama presidency.

HAITI. Here's more on the American Friends Service Committee's efforts to relieve suffering in the wake of the recent earthquake.

COAL. A new report predicts the decline Central Appalachian coal production. Here's all kinds of info on this from Ken Ward's Coal Tattoo.

GREEN JOBS. West Virginia just got a $6 million federal grant intended to create 1850 of them.

What's it all about, Horatio? 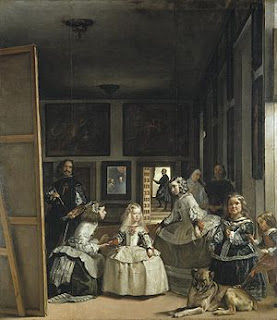 Several years ago, I had a fun time plowing my way through Jacques Barzun's massive tome From Dawn to Decadence: 1500 to the Present. It was sort of a leisurely 800 page amble through the modern era.

I know it may seem strange to people today to think of the 1500s as "modern," but that's not an uncommon historical idea. That was the general period that saw printing, Protestantism, the Renaissance, early capitalism, the "discovery" aka plunder of the New World, and all kinds of other things take off for good or ill in the West.

One characteristic of early modernity that persisted through the centuries, according to Barzun was a heightened self-consciousness. One example of that can be seen in the above classic 1656 painting, Las Meninas by Diego Velasquez.

Velasquez is actually painted into the picture--he's the guy with the paintbrush on the left--something that would be unthinkable for a court painter in earlier times. He also plays around with a mirror that shows a reflection of the king and queen of Spain who aren't seen elsewhere.

It's pretty cool when you think about it: a picture of an artist painting a picture of a bunch of people (including himself) complete with images of people who aren't in the picture.

Velasquez is clearly having fun flouting traditions, but that kind of artistic self consciousness shows up in other works of the early modern period. Shakespeare's Hamlet is a case in point, about which more tomorrow.

INEQUALITY AND HEALTH, a frequent topic here, are inversely connected, according to the latest EPI snapshot.

SPEAKING OF HEALTH, most Americans prefer a tax on the wealthy rather than workers' insurance plans to help pay for the expansion of coverage according to a new poll.

HOWEVER, ALL BETS ARE OFF on the future of reform in the wake of the Massachusetts election.

JOBS, JOBS, JOBS. Here's Dean Baker on what we could do to save and create them.

I've just started writing about Shakespeare here and hope to eventually go on a Hamlet bender, but first here's a random thought on great literature: it's impossible to read a work of it the first time. That is to say, in order to read one--especially if it is dense and rich--you have to have already read it. At least once.

That may sound strange, but I'll explain. I remember trying to read things like Hamlet and Dante's Inferno as far back as high school. But I didn't get much of it. If someone would have asked at the time what I was reading, I'd have to say with Hamlet, "Words, words, words."

Even things like William Blake's poetry, which seem deceptively simple at first, take a lot of work to really get.

I've found that really difficult (but good) works demand more than one effort and often require background reading before you can really get anything out of them. I'm not ashamed to say I've cracked open some Cliff Notes or the equivalent on more than one occasion just to get my bearings. There's a whole lot you miss the first time through.

I think it took me at least three or four assaults on The Iliad to really begin to get it. Probably more with Dante. Not that I think I've really mastered either. A lot of Shakespeare is like that. While you always get more if you go back, some are easier to get the gist of than others: Romeo and Juliet, Macbeth, and Julius Caesar might be examples. Others, like Lear and Hamlet take more work. But I'd say it's worth the effort.

SIZING UP THE MOMENT (and the Obama administration) is the theme of Krugman's latest.

COAL TO LIQUIDS? The WV Affiliated Construction Trades Foundation raises some serious questions about a proposed plant to turn coal into liquid fuels.

FOUR YEARS AGO TODAY. Also from Coal Tattoo, this post looks back on the fourth anniversary of the Aracoma mine fire.

THE BIGGEST LOSER? Here's a look at some loopy weight loss ideas.

ANIMAL ANTI-FREEZE. This article looks at how some humble creatures deal with winter.

Knocking holes in the darkness 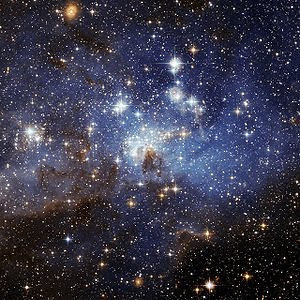 I can't think of anything better to say on Martin Luther King Jr. Day than to recommend that the Gentle Reader check out this interview with civil rights leader Rev. Samuel "Billy" Kyles about the life, work and death of Dr. King.

Kyles draws on a figure of speech attributed to the young Robert Louis Stevenson. The story goes that one night the boy looked out his window at a lamp lighter who went from pole to pole lighting old fashioned gas street lamps and called out "There's a man coming down the street punching holes in the darkness!"

Kyles suggests that this is a good image for the work of Dr. King and a challenge for the rest of us.

(Given the general state of the world, it should be steady work anyhow...)

ON THAT NOTE, this item argues that if Dr. King was around today he'd be talking about poverty and economic justice.

HAITI. Here's more about the American Friends Service Committee's response to the earthquake in Haiti.

A GOOD FRIEND OF MINE was honored by El Cabrero's beloved state of West Virginia for her contributions to the causes of civil rights and social justice.

OTHER TOOL USING ANIMALS. Add crows to the list.