Goat Rope Farm is pleased to announce the birth of Honeysuckle, daughter of Juno and grand daughter of Arcadia S. Venus, the farm's official matriarch. This was Juno's first birth and she had the courtesy to do it without need of assistance while El Cabrero was out of town. La Cabra is much relieved.
by El Cabrero 1 comment:

There are many meanings of the word conservative, and I like some of them a lot. One kind that I have no use for, however, is that branch which devotes itself to justifying the wealth, power and privileges of ruling groups.

Such ideologies, whether ancient or modern, pretty much all run the same. Those in dominant positions are there due to merit (or God's will) and are where they should be. Furthermore, any effort to reel in any of their excesses would only hurt people in the lower social orders. The same argument can be applied to feudal lords, coal barons, Wall Street speculators, CEOs, you name it.

This was another area where 20th century theologian Reinhold Niebuhr nailed it:

Since inequalities of privilege are greater than could possibly be defended rationally, the intelligence of privileged groups is usually applied to the task of inventing specious proofs for the theory that universal values spring from, and that general interests are served by, the special privileges which they hold.

He also had some interesting things to say about the philanthropy of the powerful, which he believed

combines genuine pity with the display of power and that the latter element explains why the powerful are more inclined to be generous than to grant social justice.

MEANWHILE, BACK AT THE SENATE, here's Ken Ward on the hearing about the Massey mine disaster and here are WV Senator Robert C. Byrd's opening remarks.

I WAS NOT AWARE OF THAT. The musk turtle's tongue has weird properties that enable it to stay underwater for months. Try to work that into a conversation today. 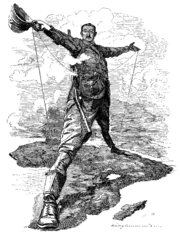 El Cabrero has been musing lately about the political insights of 20th century theologian Reinhold Niebuhr, whose work has been vastly influential. Niebuhr was no fundamentalist but he took the idea of sin as in egoism seriously and applied it particularly to social and political life.

In Moral Man and Immoral Society, he was particularly skeptical about the moral claims of nations, which always justify whatever they do (however unjustifiable) in the most grandiose terms:

Perhaps the most significant moral characteristic of a nation is its hypocrisy. We have noted that self-deception and hypocrisy is an unvarying element in the moral life of all human beings. It is the tribute which morality pays to immorality; or rather the device by which the lesser self gains the consent of the larger self to indulge in impulses and ventures which the rational self can approve only when they are disguised.

There has probably never been a war of aggression or colonial adventure which wasn't justified in the highest terms by people who may or may not have actually believed it.

No nation has ever made a frank avowal of its real imperial motives. It always claims to be primarily concerned with the peace and prosperity of the people whom it subjugates.

Along with hypocrisy, nations also have self-righteousness down pretty good.

DEPARTMENT OF CORRECTIONS. I apologize to email subscribers. Yesterday, as I was working on a draft post, I must have hit the wrong button and a not-ready-for-prime-time post may have hit your mailbox. My bad.

MORE STUFF FOR THE COAL INDUSTRY TO DENY. Leading groups of scientists just published a report calling for serious action on climate change.

WELFARE MOMS. How are they doing these days? 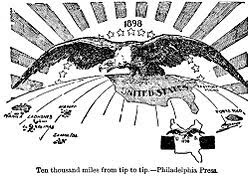 People have long observed how powerfully nationalism can motivate people, even those who have low status and little apparent stake in the nation in question. When World War I broke out in Europe, for example, there was widespread joy and euphoria on all sides. Even many political radicals who had previously vowed to oppose international conflict joined it.

Nationalistic enthusiasms (which nation is involved is immaterial) can override rational and religious considerations. Reinhold Niebuhr in his 1932 classic Moral Man and Immoral Society, has a succinct explanation:

"The man in the street, with his lust for power and prestige thwarted by his own limitations and the necessities of social life, projects his ego upon his nation and indulges his anarchic lusts vicariously. So a nation is at one and the same time a check upon, and a final vent for, the expression of individual egoism."

In his view, it is precisely that mixture of selflessness and vicarious selfishness that give nationalism its power.

WORDS, WORDS, WORDS. A new survey about American attitudes towards things like capitalism and socialism finds some surprising numbers.

CHRISTIANITY AND CONSERVATISM. This article wonders how, given the Bible's powerful statements on social justice (yeah, I said those dreaded words), the two can go together.

OK, SO I'M SMIRKING. The state of WV is discontinuing it's redesigned version of Medicaid, which is something quite a few people I know will celebrate. 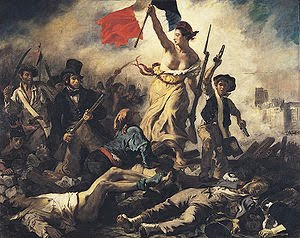 El Cabrero has been blogging lately about political philosophy, with a special emphasis on the late great theologian Reinhold Niebuhr's insights from his 1932 classic Moral Man and Immoral Society.

(Here's one sure sign that the book in question comes from another era: there was no obligatory colon and subtitle.) His main idea is that while groups take us away from our self absorption, they can also be much more egotistic, imperialistic and dangerous than individuals.

A classical example of this is nationalism. He had this to say about that:

...the nation is a corporate unity, held together much more by force and emotion, than by mind. Since there can be no ethical action without self-criticism, and no self-criticism without the rational capacity of self-transcendence, it is natural that national attitudes can hardly approximate the ethical. Even those tendencies toward self-criticism in a nation which do express themselves are usually thwarted by the governing classes and by a certain instinct for unity in society itself. For self-criticism is a kind of inner disunity, which the feeble mind of a nation finds difficulty in distinguishing from dangerous forms of inner conflict. So nations crucify their moral rebels with their criminals upon the same Golgotha...

UPPER BIG BRANCH MASSEY MINE DISASTER. Here's an interesting report on Massey from NPR. And here's another on the fun and games that will accompany Massey's annual meeting.

A LITTLE GOOD NEWS. West Virginia's unemployment rate fell in April. I hope it's the proverbial light at the end of the tunnel (rather than an oncoming train).

MY ENEMY, MY FRIEND. As we grow up, it's hard to tell them apart.

MAYBE POE HAD IT WRONG. It appears that ravens console each other when one has a bad day. 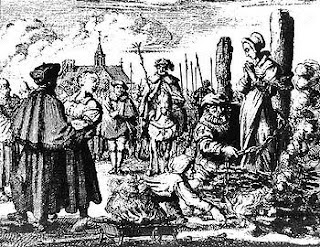 "Those who benefit from social injustice are naturally less capable of understanding its real character than those who suffer from it."

Theologian Reinhold Niebuhur's Moral Man and Immoral Society is basically a deconstruction of political utopianism. His main point is that social life will always be an arena of struggle given that fact that groups amplify all the flaws of human nature.

He is skeptical of many things that people of various times and places hoped would remedy social ills--including religion. In the past, it wasn't uncommon for people to believe that the civilizing influence of religion would gradually lead to a just and good society.

To some degree it has. The influence of Buddhism seemed to mellow out peoples such as the Mongols and Tibetans. The early Christian church, once it emerged from illegal status, put an end to the practice of crucifixion and gladiatorial spectacles (although it didn't take too many centuries before the church outdid even these with inquisitions and witch burning).

But he viewed religion historically is a two-edged sword. It can lead to greater social justice, but it can also justify injustice with other-worldliness or sanctify cruelty with the belief that God is on one's side. Without engaging in religion bashing, it's hard to deny that there's plenty of that to go around these days.

WHACKADOODLISM. Paul Krugman's latest op-ed is on the growth of right wing extremism in the wake of the recession.

LICENSCE REVOKED. I was stunned to learn recently that the clerical license of my friend the Rev. Jim Lewis has revoked by the Episcopal bishop of WV. Here's an op-ed questioning that decision.

TEACHERS AS TARGETS. It kind of looks like teachers are the scapegoats for all that is wrong in El Cabrero's beloved state of West Virginia these days.

HAST ANY PHILOSOPHY IN THEE, SHEPHERD? A new online series tackles the subject.