Having it both ways

So this past week we heard that the president declared America's opioid crisis to be a public health emergency. We can at least agree on that.

Too bad he didn't mention anything about the funding needed to deal with it.

In 2015, there were more than 2.5 million Americans with opioid use disorder according to the Substance Abuse and Mental Health Services Administration. That year, more than 33,000 Americans died of opioid overdoses, which is triple the death rate for 2000. The United Nations Office on Drugs and Crime reports that the US, with less than 5 percent of the world's population, accounts for about a quarter of drug related deaths.

Unfortunately, the same person who declared the emergency also wants to destroy the Affordable Care Act, which has brought drug treatment to many Americans.

So it seems that what we have here is the declaration of an emergency along with a declaration of war on one of the few things that is actually working to deal with it. 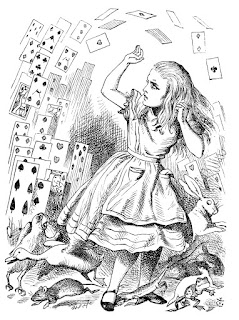 Earlier this year a friendly librarian changed my life. Again. She told me about this cool online service, Hoopla, which among other things allows you to download audiobooks to your smartphone or other devise.

I've always been a big fan of audio books, but used to listen to them in the Paleolithic era on cassettes and in the Neolithic era on compact discs... all of which had an irritating tendency to disappear or get damaged. Thanks to Hoopla I've been able to burn through dozens of books while driving, mowing or other tasks.

I took a classic wisdom bath and listened to unabridged recordings of Herodotus, Thucydides and Plutarch. I binged on my beloved (and admittedly crazy Nietzsche). I caught up a bit with my old friend Freud.

Just lately, to clear the palate, I listened to Lewis Carroll's Alice's Adventures in Wonderland. I've been a fan of the Disney movie forever, the more recent version not so much though I like the actors, but it had been a while since I read the book.

It was even more delightfully trippy than I remembered it, dreamlike and full of playing with language and logic.

Since we've gone down the rabbit hole lately, with and Orange King instead of a Red Queen screaming "off with their heads," it's even kind of timely. Electronically or otherwise, I highly recommend giving it another look.
by El Cabrero No comments:

Christian charity keeps me from referring to the big business friendly Tax Foundation as a racket for the rich. So I won't. But it kind of is. The group rates states on their "tax climate" (translation: good for a few) as if that was a measure of well-being.

Today, conservative commentator Hoppy Kercheval celebrated West Virginia's improved ranking of 19, ahead of our surrounding states. Most of the "improvement" in ranking comes from tax cuts initiated 10 years ago and phased in over time.

My friend Sean O'Leary at the WV Center on Budget and Policy summed it all up in a great tweet:


And all it cost us was an ongoing budget crisis, credit downgrades, a depleted rainy day fund, and major cuts to higher education.

Oh yeah, and we have fewer jobs now than then. And we've lost population. And things have gone so dark that we lead the nation in drug overdose deaths. And schools are laying off teachers and support staff. And we cut taxes by more than enough to pay free in-state tuition and fees to all WV students in a state that desperately needs to raise its educational attainment rates.

But, hey, the Tax Foundation is happy. That's all that matters, right?