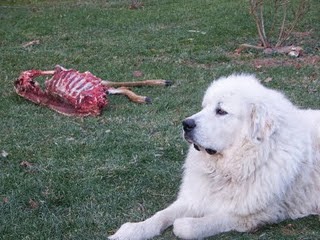 Arpad, Great Pyrenees security chief at Goat Rope Farm, in warmer times, with a friend. Or part of one.

One of the things I admire about Arpad and the whole Great Pyrenees breed is that they are like the ideal martial artist, protective but not the least aggressive, potentially as dangerous as a gun at close range but generally unaware of and unconcerned about the fact and not in the least inclined to show it.

Most of the time, Arpad is a genial goof and occasional low thief. If we had fair elections on our dead end holler road, he's be a shoo-in for mayor.

His supreme coolness often manifests itself when we go on a 5 to 6 mile loop walk along neighboring ridges. Up at the top, there are a couple of mean Rottweilers who bark at us and threaten to attack.

Arpad generally places himself casually between us and them but considers them so far beneath him that he makes no eye contact and does not acknowledge their existence in any way. Until, that is, he gets to the end of their territory, at which point he generally leaves a massive if fragrant calling car.

The state motto of El Cabrero's beloved state of West Virginia is "Mountaineers are always free." I really like that one, although perhaps it was adopted before some residents of my state became as habituated to groveling at the feet of corporations as they are today.

If we had to bring that motto up, or, more accurately, down to date, I'm not sure what it would be. My first choice would be this:

p.s. I'd totally love to be proven wrong about this by subsequent events.
by El Cabrero 1 comment:

OK, so this is more of a tweet than a self respecting blog post, but a friend of mine had a great one liner today when we were talking about West Virginia's water woes, from the chemical leak in January to the latest coal slurry spill.

He said the only good thing about the water mess was that it made West Virginia's ruling class stop talking about the Obama administration's so-called "war on coal" for a month or so.

I think he might have been right.
by El Cabrero No comments:

Golly, it's a good thing the coal industry can do no wrong, right? Otherwise the latest water disaster, a coal slurry leak in eastern Kanawha County might not be a good thing. I guess this just shows that we need to do more to lift the burden of pesky regulations off the back of industry so that the job creators can work their magic...
by El Cabrero No comments:

The water crisis brought on by Freedom Industries' chemical leak provides a good real life illustration of what I think is a useful tool from political science. It's from John Kingdon's Agendas, Alternatives and Public Policies.

Theory is important, by the way. No one serious about affecting social change should ignore it. Or worse, substitute it with bad or just tired rhetoric. And the main reason to develop good theories in this context is to be able to apply them in real situations.

In Kingdon's model, policy changes happen when policy windows open. Policy windows open when three streams come together: the problem stream, the policy stream and the political stream. Specifically, those interested in enacting a policy need to be able to "couple" it to something that is widely seen to be a problem when political conditions are favorable. When the streams don't come together, it's hard to get anything major done.

The chemical leak made plenty of people see the need for clean water to be a problem. It's an open question as to whether it will be possible to muster the political will to enact strong enough policies to protect it.

There are lots of roles to be played in this arena. One is the wonkish role of developing policies and trying to pitch them to the political stream and link them to problems people want to act on. Another is to muster pressure to move the political stream in the right direction. Still another is raising public awareness that this or that is a problem that can really be addressed.

One thing is for sure in the water crisis: we've got the problem stream covered. We'll see in the next few weeks how or if the others come together. I hope they do. Its a safe bet though that the toughest stream will be the political one.
by El Cabrero No comments: