A little weekend Whitman--and a bonus 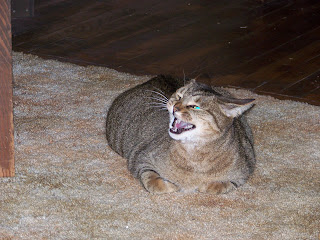 How about a little weekend Walt?

I HEAR America singing, the varied carols I hear;
Those of mechanics—each one singing his, as it should be, blithe and strong;
The carpenter singing his, as he measures his plank or beam,
The mason singing his, as he makes ready for work, or leaves off work;
The boatman singing what belongs to him in his boat—the deckhand singing on the steamboat deck;
The shoemaker singing as he sits on his bench—the hatter singing as he stands;
The wood-cutter’s song—the ploughboy’s, on his way in the morning, or at the noon intermission, or at sundown;
The delicious singing of the mother—or of the young wife at work—or of the girl sewing or washing—Each singing what belongs to her, and to none else;
The day what belongs to the day—At night, the party of young fellows, robust, friendly,
Singing, with open mouths, their strong melodious songs.

And, at no extra charge, here's a nice music video from Leonard Cohen. 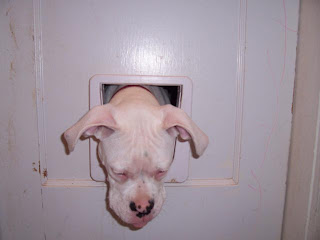 This guy had some bad luck.

El Cabrero has been musing lately about the role of luck in human affairs. By luck, I mean things that affect us for good or ill that we can't anticipate or control. We go though our lives vacillating between automatic pilot and conscious planning, but even when we try to leave nothing to chance,the universe gets a vote of its own.

My sense is that while the universe is not out to get anybody personally, it probably won't stay up nights worrying about us.

Even on those rare occasions when things work out according to plan, I'd say we were pretty lucky. Think of all the things that could have happened that didn't.

I know that some people believe there is no luck or chance, but I choose not to blame God for everything that happens and could never work my mind into a strict naturalistic determinism. Even if the universe really was a closed, deterministic system, we don't experience it that way and certainly don't have a God's eye view.

Whilst perusing many a quaint and curious volume of forgotten lore on the subject of luck, I came across this little quote by the American philosopher John Dewey:

No one knows what a year or even a day my bring forth, The healthy become ill; the rich poor; the mighty are cast down' fame changes to obloquy. Men live at the mercy of forces they cannot control. Belief in fortune and luck, good and evil, is one of the most widespread and persistent of human beliefs. Chance has been deified by many peoples. Fate has been set up as an overlord to whom even the Gods must bow. Belief in a Goddess of Luck is in ill repute among pious folk but their belief in providence is a tribute to the fact no individual controls his own destiny.

So good luck out there today.

SPEAKING OF CHANGING LUCK, big business lobbyists are anticipating some, according to this item from McClatchy papers.

SIGN OF THE TIMES. Retail sales took a nosedive in October.

LOOKING BACK (AND AHEAD). This New Yorker item ponders the presidency.

THE NEXT BIG CRUNCH is likely to be ecological. 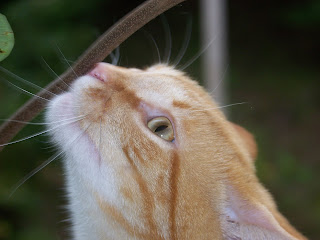 Note: I'm not sure what this picture is doing here.

I've said this before and will say it again: if I was the president-elect of the United States (God forbid!), my first act would be to demand a recount. The actual person in question, however, seems to be of a different mind, so here's wishing him and us all the best.

It is the policy of this blog to stay out of the election business and instead focus on issues. Having said that, the changed political landscape means that some things may be possible that haven't been before.

Here are some things from my wish list (they've been frequent topics here for the last two years):

*The Employee Free Choice Act, which makes it easier and safer for workers to join unions, could be the most significant piece of social legislation in decades. Once the freedom to organize without fear of retaliation is restored, a lot of other problems facing working families would take care of themselves.

*Enacting a meaningful and targeted economic stimulus package that includes aid to states and help for those hardest hit by the recession.

*Getting serious about dealing with climate change.

While we're at it, ending the war in Iraq and a saner approach to international affairs and conflicts might not hurt either.

In general, the more I learn about the current state of the nation and the world, the more I'm convinced that we have a relatively small window of opportunity to get our act together if the future is going to be even marginally tolerable.

SNARKY WEST VIRGINIA COMMENTS. Every so often, some extremely wealthy groups or individuals attempt to purchase certain state products. I'm referring to things like the supreme court, the attorney general's office, the legislature and other such commodities.

El Cabrero is utterly heartbroken to find that the state and national Chamber Pot of Commerce was not able to close the deal despite have spent lots of out of state money. I need to pause to compose myself...

MASSEY TRIAL TO BEGIN. Widows of miners who died in the Aracoma mine fire in 2006 could get their day in court soon.

MUSHROOMS AND CLIMATE CHANGE. Who would have thought there would be a connection?

CIVILIAN CASUALTIES in Afghanistan are mounting.

WHERE THE RUNNER HITS THE ROAD. Do joggers have road rage issues? (That's a new one for this long timer.) 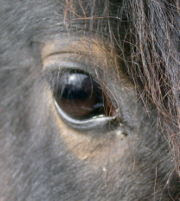 This post was deliberately written before the election and I have no idea how things will turn out. Since I'm sure the results of many different races will be on most people's minds today and that most of us will be thinking that some were good and some were bad, I think a little Buddhist story might be appropriate now.

If memory serves, it goes something like this: One day, a poor farmer's horse ran away. His neighbors came to console him, but he said that this could be either good or bad--who could tell?

The horse came back with several other wild horses. His neighbors congratulated him on his good fortune. Just as before, he said that this could be either good or bad.

Then his son broke his leg while trying to tame one of the horses. His neighbors again consoled him, but he again said that he couldn't really know if that was good or bad.

Shortly thereafter, the army came by looking for conscripts and left his son behind because of the injury. As before, his neighbors congratulated him on his good fortune.

Here's hoping it's for the good.

PARTING SHOTS from the Bush administration may be hard to undo.

INTERESTING INTERVIEW. American historian Eric Foner has some interesting things to say in an interview with the German magazine Der Spiegel. Here's an excerpt:

SPIEGEL: In Europe people tend to call on the government in times of economic insecurity. Why doesn't this happen in the US?

GOAT ROPE ADVISORY LEVEL: WHO CAN TELL?
by El Cabrero No comments: 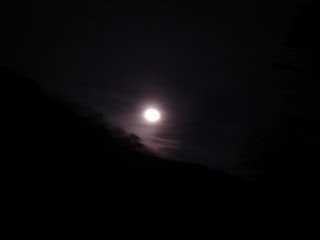 Does the election have you howling at the moon?

The Gentle Reader may have noticed that there is an election going on today. Although this blog is about public affairs and policies (and whatever random topics are on my mind), El Cabrero has made no mention of it.

Here's the main reason: Goat Rope is the unofficial blog of the American Friends Service Committee WV Economic Justice Project. AFSC is a non-profit organization related to the Society of Friends (Quakers), although staff and volunteers come from all kinds of religious backgrounds.

While my day job is all about trying to improve conditions for low income and working families, I focus on issues rather than elections or candidates and these issues don't seem to go away no matter who or what party is in power.

*if you haven't voted already, please get out and do so if you are registered.

*if you're not happy with the way it turns out, remember the theme here lately: the goddess Fortuna is fickle and her wheel turns. Sometimes she brings people up and sometimes down but the wheel keeps moving.

*sometimes you win by losing and lose by winning. It's hard to tell at the time.

*the country is in such a mess that whoever wins is going to have a rough time. If El Cabrero--God forbid--was ever elected to the office of the president, my first act would be to demand a recount. And people who care about good policies are going to have a lot of work to do however it turns out.

Here's hoping that by the time this day is over we have clear--and clean--winners.

There are all kinds of great stories about...shall we say colorful...Appalachian voting practices. One of these involves stories about dead people's ballots being counted.

As a true hillbilly unto the generations, part of me wants to say that it's OK to cast ballots for dead family members, as long as you know how they would have voted if they were still here.

But don't quote me on that.

A LITTLE (ABOUT) POLITICAL HUMOR here.

A LITERAL ECONOMIC MELTDOWN can be seen here. 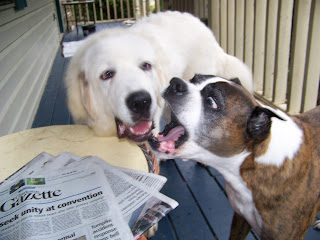 These dogs are arguing about politics.

El Cabrero's late father, the bad joke magnet, used to tell one about a rural resident who called the sheriff's department because there were 20 dogs carrying on in his yard.

"Are they mad?," the dispatcher asked.

No matter what happens tomorrow, some dogs are going to be upset. And one thing that will undoubtedly happen is that the post-mortem explanation industry will kick into gear to explain WHY THINGS HAPPENED THE WAY THEY DID. Most of them will be absolutely convinced of the validity of their explanation.

We can't really help it. Ever since people have been able to talk, they have made up explanations or stories--mythological, logical or otherwise--to explain things. We are driven to come up with a narrative or story that sounds good and connects events together in a way that makes sense.

That is to say, we torture the data until it confesses.

The problem is that while we're addicted to our narratives, there is absolutely no necessary connection between our explanations and what really happened.

Nassim Nicholas Taleb, author of The Black Swan: The Impact of the Highly Improbable, calls this the narrative fallacy, which

is associated with our vulnerability to overinterpretation and our predilection for compact stories over raw truths. It severely distorts our mental representation of the world; it is particularly acute when it comes to the rare event.

Once again, a little skepticism is called for, not only about the stories we hear from others but our own as well.

That's my story and I'm sticking with it.

BY THE NUMBERS, here's a look at the current US economy, courtesy of the Economic Policy Institute.

WATER could be the new oil.

A GREEN NEW DEAL? Why not?

WHY DO WE BELIEVE in weird stuff?

GEORGE ORWELL gets a tip of the hat here.