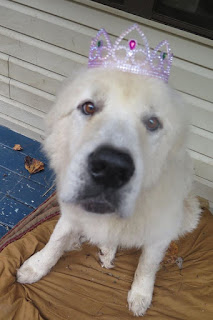 It is with great sadness that I report the passing of Arpad the Great, the Great Pyrenees security chief of Goat Rope Farm. We enjoyed him for 8 years. He died of an apparent heart attack in his sleep while fighting off a persistent infection. 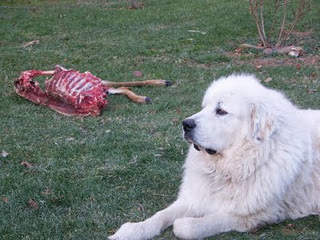 He had the great combination of being protective but non-aggressive and he was loved by those who knew him as a genial goof. He also enjoyed dragging deer carcases into the yard for a little snack. 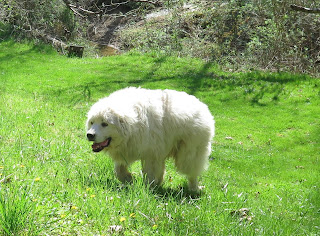 It won't be the same place without him. May he be reborn in the Pure Land of Amida Buddha where he can work towards final liberation under the most favorable circumstances. 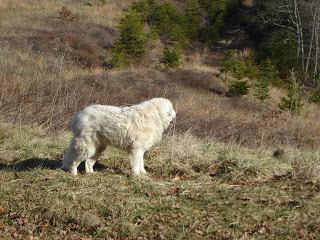 This op-ed of mine ran in today's Gazette-Mail. I wonder if any trolls will bite...

Back in May 2013, Governor Tomblin announced his decision to expand Medicaid coverage for low income working adults. At the time, it was estimated that this would allow 91,500 previously uncovered people to gain coverage by this social insurance program.

The decision to expand Medicaid became a state option after a 2012 US Supreme Court decision upholding the Affordable Care Act (ACA). As of now, 32 states including the District of Columbia have decided to expand, while 19 have yet to do so.

Nobody guessed at the time that in just a couple years around 175,000 West Virginians would benefit—or that the WV Department of Health and Human Resources would do such a great job of signing up eligible people.

It’s one thing to measure increases in coverage, but it’s quite another to measure whether better health practices and outcomes result. This was especially true since such data emerges over time and the program was only launched in Jan. 2014.

After more than two years, a picture is emerging.

A study recently published in the Journal of the American Medical Association compared changes in health care for three states—Kentucky, Arkansas and Texas--since expansion became an option. Of these, Kentucky and Arkansas expanded Medicaid, with the former using the public program and the latter using private insurance. Texas did not choose to expand.

Obviously, the number of uninsured dropped dramatically in the first two states compared with Texas, which is what one would expect. The percentage rate went from 41.8 to 24.2 in Arkansas and from 40.2 to 8.6 in Kentucky. The changes were much smaller in Texas, where the rate dropped from 38.5 to 31.8, with the reduction largely due to the creation of insurance exchanges under the ACA.

There weren’t huge differences between Kentucky and Arkansas, although the former seemed to be doing a better job of managing diabetes. But things were different when these states were compared with Texas.

For one thing, eligible people in the two states that expanded care were 12.1 percentage points more likely to have a personal physician. Having a medical home is important to ensure continuous and comprehensive care.

This is a big deal for more than one reason. For one thing, if you delay seeking medical treatment until it becomes an emergency, both health risks and costs increase. And, since hospitals are required to provide emergency services regardless of ability to pay, this can increase the cost of uncompensated care. And these costs tend to be passed on to others through higher premiums.

Best of all, the proportion of people claiming to be in excellent health in states that expanded Medicaid increased by 4.8 percentage points.

The report concluded that expansion resulted in “major improvements in access to primary care and medications, affordability of care, utilization of preventive services, care for chronic conditions, and self-reported quality of care and health.”

The study’s authors suggest that the data “provides support for staying the course” in states that have expanded Medicaid. And for the states that have yet to do so, expanding coverage “can produce substantial benefits for low-income populations.”

All these things together can make for healthier, longer, happier and more productive lives, in addition to boosting the state’s economy.

I’m glad West Virginia did the right thing. And I hope we hold the line in the future if these gains come under attack. People’s lives are riding on it.

This morning I got a message from a friend saying that I'd managed to tick...well, he used another word...off someone as far away as Idaho. I wondered how that happened as my reach doesn't usually extend that far.

It turns out it came from someone at a right wing "think" tank that among other things denies climate change. I don't think the article had a lot to do with what I wrote (check here). Here goes:

In his recent op-ed, “Our words say education but our actions say something else,” Rick Wilson shows himself ignorant of reality, or else intent on ignoring it.

Wilson argues for West Virginia making college tuition free, or less costly. Mr. Wilson, there’s no such thing as a “free” education. We may make education less costly for students, but what about for the taxpayers?

Giving away free college educations to everyone is a nice sentiment, but it isn’t practical, nor will doing so provide the economic and societal gains purported. Look at our situation now: The government made it so easy to get a federal student loan, it created an artificially inflated marketplace. If students didn’t have such easy access to loans, thousands fewer would be able to attend college, and colleges would be forced to lower their prices — thus reducing the student loan debt that haunts people into old age — or else go out of business.

The ease of acquiring a student loan has also been at the expense of education quality. Because more people are able to attend college, an increasing number feel it is necessary for career success to obtain a college degree, even from a mediocre or low-quality institution. College degrees are a very expensive rite of passage these days that end up meaning very little when everyone is expected to have one. A college degree has become a money-making scheme that institutions use to siphon money from students (and taxpayers), without helping them to obtain increased knowledge, skills or training.

Uhhh gee. I guess I was totally wrong. Higher ed is stupid. I recant. On the other hand, I do have the solace of a good deed since feeding trolls is a form of Christian charity.

Last week marked a major milestone in terms of public policy in the US. August 22 was the 20th anniversary of the signing by President Clinton of the "Personal Responsibility and Work Opportunity Reconciliation Act," generally known as welfare reform.

I remember talking about it at the time with the future Spousal Unit. While nobody could deny that the old Aid to Families with Dependent Children could use some work, we thought that the legislation passed in the wake of the 1994 Republican "revolution" was mean-spirited and would ultimately hurt children and vulnerable families.

The name of the new program said a lot: "Temporary Assistance for Needy Families." Accent on "temporary."

I had no idea at the time that I'd be spending the next few years fighting what I sometimes call the "TANF wars." This was due to the fact that the federal legislation left a lot of decision making power in the hands of states. Some of the battles involved treatment of people with disabilities and their families, access to education and training, time limits, support services, and domestic violence.

At the national level, the DC based Center on Budget and Policy Priorities looked back after all these years and here's what they found:

Over time, TANF has provided basic cash assistance to fewer and fewer needy families, even when need has increased.

During the recession and slow recovery, TANF served few families in need.

The amount of cash assistance provided to families has eroded in almost every state, leaving families without sufficient funds to meet their most basic needs.

TANF plays much less of a role in reducing poverty than AFDC did — and the provision of less cash assistance has contributed to an increase in deep or extreme poverty.

Although a key focus of welfare reform was on increasing employment among cash assistance recipients, states spend little of their TANF funds to help improve recipients’ employability.

Employment among single mothers increased in the 1990s, but welfare reform was only one of several contributing factors — and most of the early gains have been lost.


That sounds about right to me.
by El Cabrero No comments: