A moment with Dionysus

In Greek mythology, Dionysus is the god not just of wine but of green and growing things and collective joy.

Sometimes that collective joy can turn to murderous frenzy when the god is provoked (see Euripides’ tragedy The Bacchants), but generally he is seen as the god who brings joy.

The philosopher Friedrich Nietzsche contrasted Apollonian with Dionysian experiences. Apollo was the god of reason, measure, control and individuality. With Dionysus, all these go out the window and we can forget ourselves for a while as we become one with others and everything that is.

(Imagine a perfect rock concert where everyone is totally caught up in the music.)

Last night I had a Dionysian moment—and I wasn’t the only one. It doesn’t work that way.

It started in Apollonian fashion, with many pilgrims gathered around a table enjoying good food and wine and making the kind of polite conversation one does when speaking with kind strangers from around the world.

Then a woman asked our hospitalera or hostess to make a traditional Galician special drink. Many of us joined in.

Our hostess was a bit witchy (in the best sense) and it didn’t take a lot of persuasion. She brought out a huge bowl (cauldron?) and added spirits, seeds and spices while talking, laughing and singing. It was quite a performance.

Then, as the lights dimmed, she struck a match and set it on fire. We began to laugh and chant “o lume!”-to light!

Those who wanted were invited to stir the cauldron with a ladle and pour the flaming liquid back into the bowl.

Then, with a flourish, she covered the flame and quenched the fire. Glasses materialized and those who chose could draw near and drink the brew.

It was a different kind of communion—with no disrespect to the other one.

It was hot, strong, spicy and-for want of a better word—botanical, rich with the flavors of the field. We drank and savored the heat.

Then, as the lights came on again, we blinked and looked at each other, knowing that somehow something special had just happened.

I think I know what it was. The god walked near us that night. And smiled.
by El Cabrero No comments: 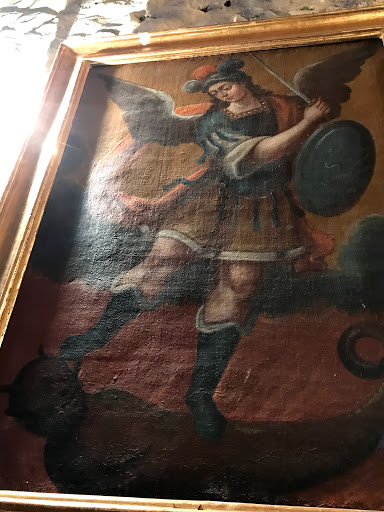 I hate it when I have to take my own advice, but sometimes it happens.

It happened today. I was starting to notice that my grumpiness over various pains was again crowding out my gratitude for the chance to walk the Camino.

I then remembered my vow to try to say yes to everything that happens on this journey. That goes for pain and discomfort too. After all, nobody goes on a 500-600 mile walk to experience pleasant sensations 24/7.

There’s an ancient Buddhist practice called vipassana, which is to simply observe what’s going on with one’s body and mind without reacting to it. I tried that today and it worked pretty well. At least as well as snarling at it.

I also drew on two things I read in the past. On was Albert Camus’ essay The Myth of Sisyphus, about the person who was punished by Zeus to eternally push a rock up a hill only to have it roll down again.

Camus imagines that Sisyphus accepts it: “His rock is his thing... One must imagine Sisyphus happy.” I decided to follow his example and try to make whatever comes my thing.

He finally stopped fighting them, saying something like “Okay guys. You can knock yours out doing the demon thing, but I’m gonna be here doing mine.”

Eventually they worked things out. I’m hoping to do something similar with my demons.
by El Cabrero No comments: 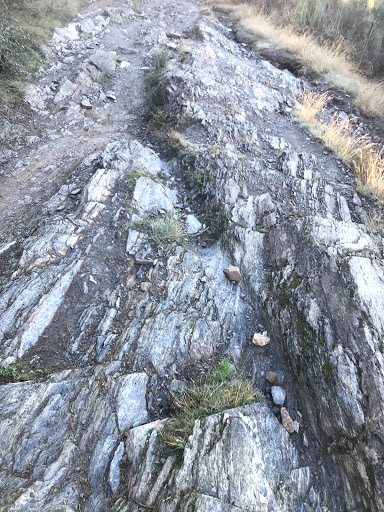 There is all kind of medical and psychological evidence about the benefits of the ancient practice of mindfulness in dealing with stress, anxiety, pain, athletic performance, trauma and-the big one-everyday life.

I’m a big fan, abstractly, but must admit I’ve never been very good at the basic mindfulness practice of just sitting and maintaining awareness. I seem to do better with active ways of trying to sustain it, like karate, tai chi, running, yoga and such.

(I think this is why meditation is much more fun to read about than to actually do.)

The idea of attending a ten day sitting mindfulness retreat scares me way more than trying to walk 500-600 miles across Spain.

Still, I have found one infallible way to practice moment by moment awareness: trail running or hiking on uneven, hilly and rocky surfaces like the one I had to go down today on the Camino.
It’s not optional: it’s mandatory. One lapse of attention, one false step or placement of your trekking poles and it could be game over.

I guess the hardest part for someone like me is to get better at doing it voluntarily when I’m not doing something crazy.

Question: how do you deal with it?
by El Cabrero 1 comment:

What makes a place sacred?

I think it has something to do with history and what people have done, felt, believed, practiced, experienced and worshipped over long—and intense— periods of time.

By that standard, the Cruz de Ferro or cross of iron on the Camino qualifies. Some believe it was the site of a shrine to Hermès (Mercury for Romans’) in ancient times.

It is said that the cross was first erected in the 11th century. Over time the custom has been for pilgrims to place or throw a stone from home or throw one over one’s shoulders there. A decent size mound has grown over time.

People also place prayers, pictures, sacred objects and such there. As I mentioned in a Facebook post, I put a rock from West Virginia there along with a medallionof the Virgin given to me by a waiter from Ecuador.

Not that I’m a card carrying pagan or anything, but Hermès has always been a big one for me, especially when it comes to travel, borders, boundaries and interpretation.

Obviously I’m down with Jesus too. This trip I try to honor the divine in whatever form.
by El Cabrero 2 comments: 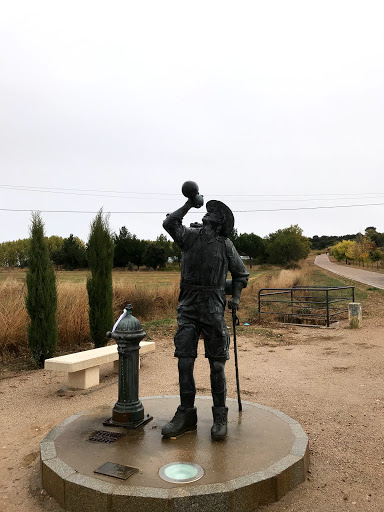 Santiago is the Spanish name for St James, brother of John and one of Jesus ‘ closest disciples, though—or because—he was a bit of a screwup at times.

In yesterday’s post, I looked at what the New Testament had to say about him. His life in legend is even weirder.

The legend goes that after the Resurrection, James undertook missionary work in the Iberian peninsula, possibly with the miraculous help of the Virgin Mary. Being a bit of a grump, he only got a few converts before deciding to return to Palestine, where he was martyred.

His remains were then miraculously conveyed back to Spain, where they had another miraculous escape from hostile pagans. They were eventually buried at what is now Santiago, where they were “discovered” by a pious hermit in the 8th century.

Once the Catholic Church signed on, it was game on. Over the ages, millions of pilgrims have made their trek to pay respect to the holy (if occasional screwup) apostle.
It was probably the most effective tourism/public relations coup in history, still paying dividends today.

There may be a lesson for West Virginia in this. Maybe we should “discover” some sacred relics there, like maybe St Peter’s laptop or Mary Magdalene’s yoga mat, and do likewise.

Hey, it worked in Spain—and I’m living proof.
by El Cabrero No comments: