In the forest of the night 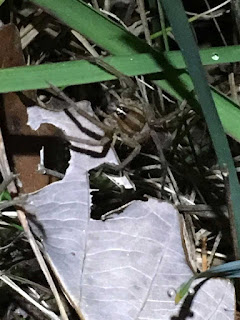 Last night, I took the dog on a walk in the woods while wearing a headlamp. It had been raining, so there was water on the grass. As we trudged up and down the hill, I saw what looked like a skyfil  of little diamonds moving on the ground. A closer look revealed, a closer look revealed a multitude of spiders busy going about their nocturnal business. There had to be thousands of them.

I guess I knew that there were spiders on the hill. And I guess I didn't expect them to go to be at sundown. Still, there was all this activity going on all around me that I'd never been aware of before.

I think that's a pretty good metaphor for life. There's stuff we don't have a hint about going on all around us all the time. Thoreau said "Only that day dawns to which we are awake" I guess something like that is true of the night as well.
by El Cabrero No comments: 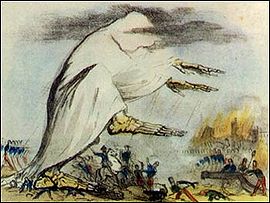 The tragic shooting in Texas and other recent acts of violence made me think of an ancient Greek idea about miasma, which means something like pollution.  In one of her books, the religion writer Karen Armstrong talks about it as a contagious power that “has an independent life of its own.” Think of it as hazmat.

I think that every act of violence, excess, hubris, moral blindness and such unleashes a bit of miasma on the world. The people who unleash it think they can control it, but they can’t. Miasma isn’t loyal. Like a toxic chemical or infectious disease, it leaks into the air and water and can have effects far beyond the initial point of infection.

It also doesn't seem to have an expiration date. The child who sees abuse may one day abuse. The victim may one day become the perpetrator. The trauma to an individual or group can have effects far across time and space. The target may be random. It may be us.The less we use it, the less pollution we release into the world, the better off we all are.

Unfortunately there's a lot of miasma out there. More every day.
by El Cabrero No comments: