You be the judge

If you're anything like me, you are really pretty sick of hearing two words that were everywhere on the news in the weeks leading up to New Year's. Yes, I'm talking f****l c***f, as in that artificially created federal budget crisis that rhymes is ixkal zliff.

I was, however, amused when a friend told me that the vent feature in a small weekly paper in southern WV complained about the "physical clip." Was it a malapropism or a witticism? I can't call it...maybe you can.

I think the last best word on the whole thing came from The Borowitz Report. Here's an excerpt:

WASHINGTON (The Borowitz Report)--Official Washington was in celebration mode on New Year's Day after kind of averting a completely unnecessary crisis that was entirely of its own creation.

"The deal proves that if we all procrastinate long and hard enough, we can semi-solve any self-inflicted problem at the very last minute in a way that satisfies no one," said Senate Minority Leader Mitch McConnell (R-Kentucky)....."This is a new year, and much work remains to be done," he said. "It's up to us to concoct entirely new optional disasters that we will have to undo at some later date in a more or less half-assed way.

In a related story, an arsonist received an award for putting out his own fire.

(Thanks to a Goat Rope reader for passing that on!)

MEANWHILE, the Center on Budget and Policy Priorities points out that the deal makes permanent 82 percent of the Bush era tax cuts. There's more on the next steps here.

WISHING. I hope this lawsuit by former WV state school superintendent Jorea Marple rocks the world of the WV Board of Education.

Oh yeah, and then there's this:

WANNA SAVE THE WORLD? Eat bugs.

There was a really interesting feature on NPR yesterday evening about recent studies of "stand your ground" laws, which pretty much allow people to shoot other people wherever whenever they get scared.

Traditionally, the right of self defense existed in the home, although people were expected to take steps to retreat outside the home when threatened with attack. The "stand your ground" laws, which became controversial after the shooting of Trayvon Martin, an unarmed 17 year old in Florida last year, allow people to use lethal force outside the home without being required to try to retreat.

Short version: these laws seem to be associated with more homicides. This seems to be true both of comparisons with other states and with before and after studies in the same states. One study suggests that such laws are responsible for 500 to 700 additional deaths per year in the 23 states that have the laws.

A few thoughts occurred to me about this. But first:

*Disclosure 1: I don't work on gun issues, nor do I aspire to. They're pretty much a non-starter in West Virginia anyway.

*Disclosure 2: there are firearms to be found at Goat Rope Farm. More than the number of human residents by a ratio of 3:2, to be exact, although these are all of the rather lengthy hunting/varmint variety.

Disclosure 3: I have spent decades practicing unarmed martial arts which evolved as means of self defense as well as studying, teaching and practicing what the late great Bruce Lee called the art of fighting without fighting. I have found that the better one is at the second, the less likely one is to need the first.

So what follows is just a personal reaction. First, I have known people who felt the need to carry handguns with them wherever they went. I'm not talking about police officers or those who carry weapons as part of their professional responsibility.The ones I knew weren't any more likely than other people to be attacked. Presumably, this was just something they needed to feel safe. That always struck me as kind of sad. Relying on something like that is a bit like relying on some lethal addictive substance. It tends to make you weaker than you would otherwise be.

It's like relying on a fast car or a drug to give one a sense of personal power. It's much cooler to have the discipline to develop real power of one's own without need of external aids, whether this power is spiritual, mental or physical.

Second, although I don't disagree with the 18th century British legal scholar William Blackstone, who referred to self defense as "the primary law of nature," there are also responsibilities to avoid violent situations. These include efforts to de-escalate potentially violent situations as well as avoiding, evading or generally getting the hell out of there when de-escalation doesn't work.

When all else fails, then and only then is it ethically permissible to take physical measures and even these should be measured. One should only use as much effort as is needed to control the situation and not a bit more. I don't think it's responsible for an unarmed person to do serious damage to an attacker in a non-lethal situation, much less to jump several levels and just bust out a gun when somebody raises a voice.

There's a huge difference between real self defense and fear killing. These so-called "stand your ground" laws confuse the latter with the former.

Email ThisBlogThis!Share to TwitterShare to FacebookShare to Pinterest
Labels: self defense, stand your ground laws

What is the deal?

El Cabrero is in agreement with whoever it was who suggested that the words "fiscal cliff" be banned, exiled or otherwise gotten rid of.  It's really a bad metaphor that stuck.

It's still a bit early to assess reactions about the deal regarding that which was formerly know as you-know-what, but here's a good assembly of facts and reactions by way of wonkblog. I'll post more analyses of the deal tomorrow.

MORE ON THAT, INCLUDING FIGHTS AHEAD here.

I don't know about y'all, but I think this is starting to be tiresome.

This year I don't have any major ones on the agenda. I would like to try not to burn or damage any bridges in the coming year; win a good fight or two (more would be swell but I won't be greedy); complete a trail half marathon; read a bunch of stuff by and about Emerson and his buddies; renew my acquaintance with Shakespeare; torture my body with kettlebells; and continue practicing martial arts. Who knows?--maybe even darken the door of an ecclesiastical establishment of the Anglican variety with more frequency. 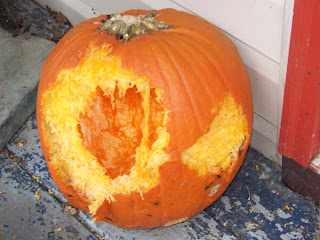 ...when turkeys carve Jack-O-Lanterns.
by El Cabrero No comments: