Another state does the right thing

In case you missed it, there was a pretty major victory for working people and for social justice recently. The Virginia legislature voted to expand Medicaid under the Affordable Care Act, with the full support of the governor.

Of course, this could have happened four years ago and helped a lot more people a lot sooner, but a different team was running their legislature at the time. All that changed after the 2017 election. Since then, the measure even gained bipartisan support.

In the parlance of our time, this is a YUGE deal for more than one reason. The first, obviously, is that many more low-income people, most of whom live in working families, will be eligible for health care, including treatment for people trying to recover from addiction. To the tune of 400,000 people.

In addition to covering more people, the Commonwealth Institute for Fiscal Analysis estimates the expansion will bring over $2 billion in federal funding to the state, create 18,000 jobs and increase state tax revenues by $88.6 million.

I’d say congratulations are due to everyone there who fought the good fight.

West Virginia fortunately made the decision to expand Medicaid back in 2013, thanks to then-Gov. Earl Ray Tomblin. As of now, around 165,000 West Virginians are covered by it. In any given year, that could be as many as 200,000 people, or one out of nine adults, including tens of thousands in recovery. That decision has also created jobs, boosted local economies and helped keep rural hospitals and community health centers afloat here.

That decision is probably Tomblin’s greatest legacy as governor and one that will be hard for any other governor to match, past, present or future.

Which leads to another reason why Virginia’s decision is a big deal: the more states that take advantage of the expansion, the tougher it will be to undo it at the federal level (and the more likely West Virginia will continue to benefit from it). So far, 33 states and the District of Columbia have expanded Medicaid.

Interestingly, no state that has flipped to Republican since deciding to expand it has reversed the decision. And several more conservative-leaning states are moving in that direction.

Last year, Kansas’ Republican legislature passed expansion, only to have it vetoed by Gov. Brownback. That could be revisited. Maine voters supported expansion last year in a ballot measure. The governor there has refused to implement it, but he faces term limits and it’s likely the next governor will be less indifferent to human misery. Utah will vote on a further expansion in November, while efforts to get the measure on the ballot are in progress in Idaho and Nebraska.

And to think that only a few months ago it looked like all that would have been wiped out by the Trump administration and the oligarchs in Congress.

That was a long, tough fight, and it's not over yet. It's likely that the Trump administration will keep pushing states to apply for waivers restricting coverage and cutting people off. It’s anyone’s guess as to whether officials here will take the bait. But they'll have a tough time pulling the plug on the whole thing.

Obviously, while Medicaid expansion is a great advance, it doesn’t cover everyone who needs health care. Many are still uninsured or have poor or unaffordable coverage.

We still have a long way to go to get to truly universal and affordable health care, possibly with something like an improved version of Medicare available to all. But it’s important to defend the ground we’ve gained and resist all efforts to roll them back even as we prepare to move forward again.

That may have gotten just a little bit easier.

Bad week for…. everything 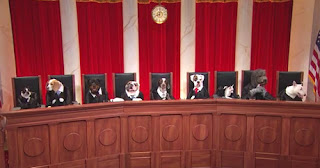 With the impending Supreme Court nomination that is sure to be gut-wrenchingly, mind-numblingly terrible, and the recent torrent of anti-human Supreme Court rulings, like their decisions on racist gerrymandering in Texas, the indefensible upholding of Trump’s travel ban,  and Janus v. AFSCME, New York Times editorial board (fake news!) gives some pithy advice that any hope for man and womankind in America is at the ballot box.

In unrelated news, the U.S. Commission on Civil Rights will be visiting our fair Capitol city next month to hear testimony about the myriad of collateral consequences facing people when they leave prison.  Topics will include barriers to employment including restrictions on professional licenses, and severely limited access to public benefits like housing assistance and SNAP.  Talk about things (like food, a place to live, steady income) that can easily be taken for granted….

Another even less appreciated problem for people when they leave prison is bad teeth, in part because of limited dental services in prison and also pre-incarceration, a likelihood of being among the 74 million Americans who lack dental coverage.

Dark days for sure, so feel free to just watch this slightly dated video from John Oliver's all-dog supreme court. 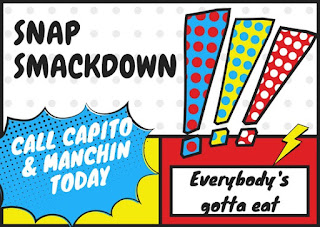 Amazingly there is good news on the Farm Bill but now is not the time to rest on our laurels.  Is it ever these days?  The Farm Bill is likely up for a vote on passage Thursday afternoon and believe it or not, the one that emerged from the Senate Agriculture committee is a decent, bi-partisan bill that protects and strengthens SNAP.  No joke!  But with the debate happening this week, and the ongoing threats to SNAP and the social safety net, here are three things you can do:

1) Pile on to the national call-in day today and tell Senators Manchin and Capito:

2) Share this video that our friends at the Food Justice Lab at WVU created about SNAP and the Farm Bill.

3) Take the #WVSNAPChallenge Mountaineers for Progress are issuing (i.e. try living off $4.20 a day especially if think SNAP benefits have people living too high on the hog). And if you’re in the Morgantown area, check out their kick-off event.

While we are talking SNAP, if you want a really good read (or listen), WV Public Broadcasting did a great story about SNAP benefits being denied to people with drug felonies, despite the trend in most other states to no longer subject drug felons to a lifetime ban from SNAP.  Stay tuned on that.

Finally, say a prayer to the internet gods on behalf of our pal El Cabrero who is still experiencing technical difficulties at Goat Rope Farm.