It was another amazing day in Jerusalem I'm leaving out the politics and social commentary for now and just sharing some of the skyline. 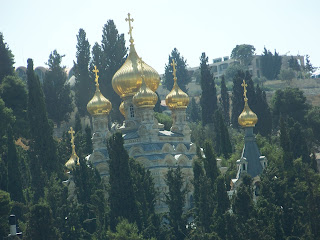 The Church of Mary Magdalene on the Mount of Olives. 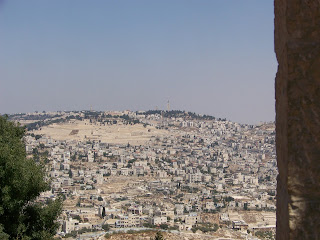 A view of the Mount of Olives. 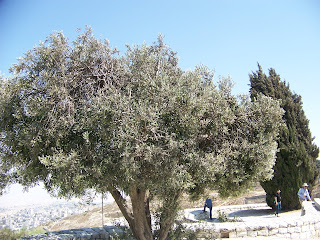 Speaking of which, this is my first olive tree. 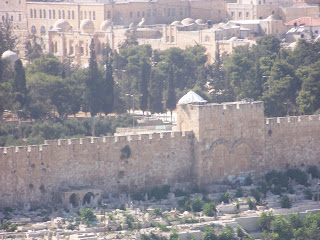 The Golden Gate to the Old City. According to Jewish tradition, this gate will only open when the Messiah appears. Let's just say it didn't see much action today. 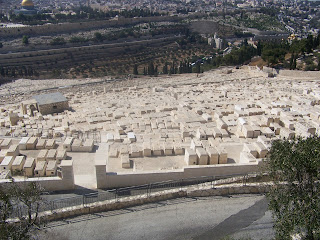 The Jewish Old Cemetery on the lower slope of the Mount of Olives. 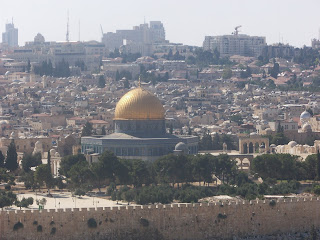 The Muslim Dome of the Rock in the Old City. Behind it is the Wailing Wall, the remnants of the Jewish Temple that was destroyed by the Romans in AD 70 by the legions of soon-to-be-emperor Titus. 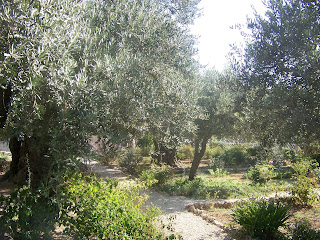 The Garden of Gethsemane.This place was really moving to me. In case you weren't big on the New Testament, this is where, after the Last Supper, Jesus prayed for the cup of crucifixion to be taken away but submitted in the end to the will of God. He was arrested shortly after. He was said to have brought three disciples, Peter, James and John, to wait while he prayed. They all fell asleep. This caused Jesus to unleash another of his great one-liners: "The spirit is willing, but the flesh is weak." 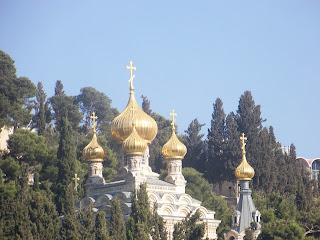 A closer view of the Church of Mary Magdalene. 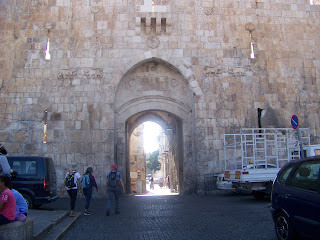 The Lion's Gate to the Old City. 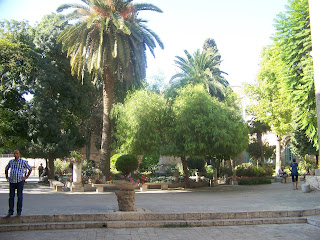 Sorry, I can't remember the name of this garden. Good though. 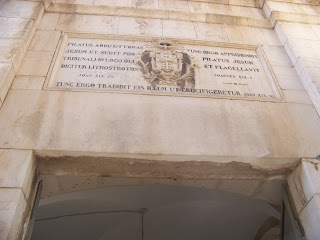 By tradition, although I wouldn't bet the farm on it, this is where Jesus was condemned.

Email ThisBlogThis!Share to TwitterShare to FacebookShare to Pinterest
Labels: Al-Quds, Dome of the Rock, Gethsemane, Jerusalem, Jesus, Mount of Olives, Via Dolorosa

An evening in Jerusalem 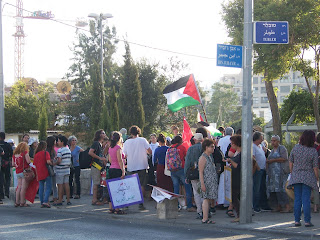 It's my first night in Jerusalem. One of the first things I saw was an Israeli-led protest of the eviction of Palestinians from the Sheikh Jarrah community. 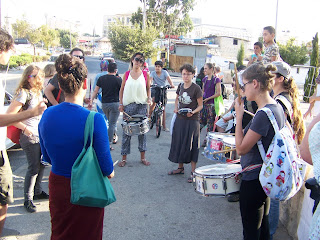 There was drumming and chanting. 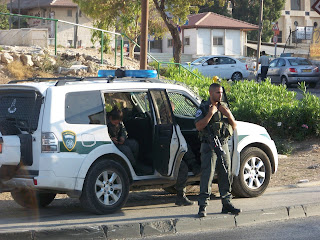 The security forces were there, but the demonstration was peaceful on all sides. 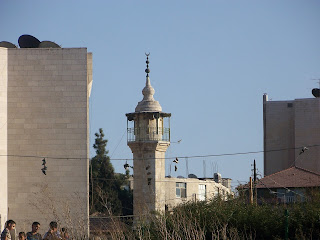 Here are some views of the skyline. 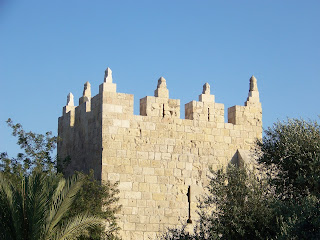 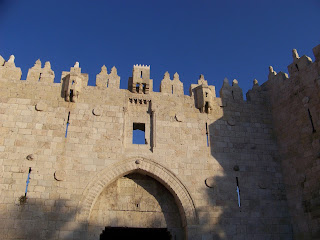 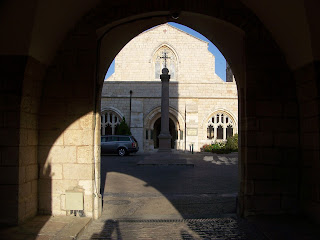 An Anglican cathedral dedicated to St. George was an island of quiet. 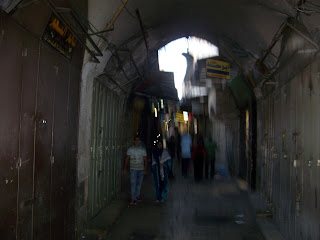 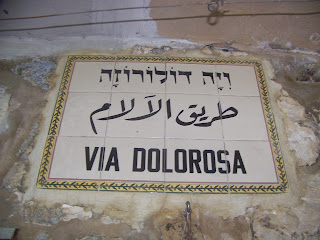 By tradition, this is part of the "way of sorrows" Jesus walked en route to his crucifixion. 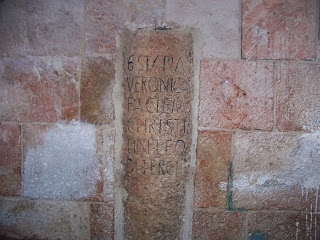 According to tradition, this is where St. Veronica wiped the face of Jesus with a cloth that became a sacred relic. 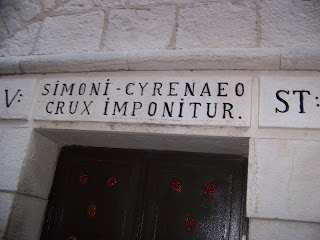 This is said to be the place where Jesus dropped the cross and Simon of Cyrene was told to carry it for him. I didn't make it along the rest of the Via Dolorosa tonight. But let's just say that the way of sorrows is still pretty crowded here. And it could be getting worse. 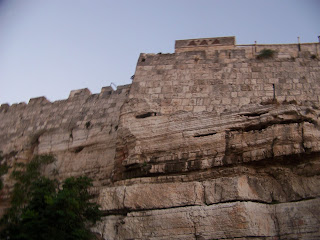 A look from the road. More to come.

How much luckier can one state get? West Virginia was visited by both Dick Cheney and bogus economist Arthur Laffer in the same week. Cheney is best known for pushing the unnecessary Iraq war as a good idea. Laffer claimed that cutting taxes would actually boost government revenue. All I can say is it's obvious neither of them adheres to the samurai code of honor.

On a side note, El Cabrero is hitting the bird road tomorrow to be part of an AFSC delegation to Israel and Palestine. Should be interesting. I'll try to post over there if I can.

Y'all can sort out the state while I'm gone.
by El Cabrero No comments:

There are plenty of sad stories in southern West Virginia these days, like this one about coal's decline and this one about how that decline has hit one county hard.

I was saddened by a different kind of bad luck that is about to hit the town of Montgomery in Fayette County (actually, part of it is in Kanawha too). It looks like the powers that be want to move the WVU Tech, formerly the West Virginia Institute of Technology from there to Beckley in Raleigh County.

Tech is the lifeblood of that community and has been there since 1895. There's not a whole lot to take its place.

I have a soft spot for Tech. After I finished my masters in sociology in 2000 at Marshall, I thought it would be fun to teach a college class one night a week (and to gradually earn back what I spent on the degree). I had my first chance to do so at Tech and really enjoyed it. I did one class a semester for a few years before moving to doing off campus courses closer to home for Marshall.

(It may well be the next best thing to stand up comedy, except they can only heckle you at the risk of their grades.)

And, as many have said, teaching is a great way to learn. I particularly found the Tech students interesting and challenging because many of them were studying things like engineering, which I can't even begin to contemplate. I must have seemed equally weird to them but we got along pretty well.

I've stopped teaching for now and don't know if I'll ever go back to it, but I'll always fondly remember my first class. And I wish Montgomery all the best.

There has been and will continue to be some lively discussion around WV about the Iran deal. One such discussion happened over the weekend. I found it interesting that one strong voice in support of the deal is retired general and former Republican national security advisor Brent Scowcroft, who had this to say about that:

Let us be clear: There is no credible alternative were Congress to prevent U.S. participation in the nuclear deal. If we walk away, we walk away alone. The world’s leading powers worked together effectively because of U.S. leadership.

To turn our back on this accomplishment would be an abdication of the United States’ unique role and responsibility, incurring justified dismay among our allies and friends. We would lose all leverage over Iran’s nuclear activities. The international sanctions regime would dissolve. And no member of Congress should be under the illusion that another U.S. invasion of the Middle East would be helpful. So I strongly urge that Congress support this agreement.


You can read the whole thing here.