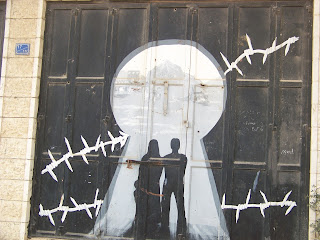 I got back from the trip to Palestine and Israel Sunday, but haven't had much chance to blog since then. This time, I'd like to share some images from the Aida refugee camp in Bethlehem. The camp was established in 1950 by refugees from Jerusalem and Hebron. According to the UN, there were around 4,700 residents there. The camp hasn't grown with the size of the population. 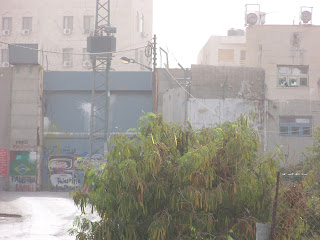 For the first few years, residents lived in tents, but gradually more substantial shelters were built. Sometimes people wonder why refugees stayed in the camps for so long. For one thing, there aren't a whole lot of places to go. For another, being a refugee or a lineal descendant of a refugee provides certain status and protections from the United Nations Relief and Work Agency. 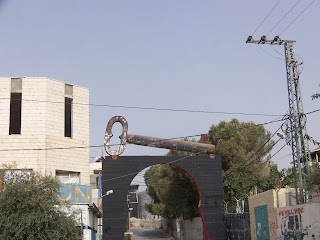 Also, many people who live there dream of returning to their homes. Hence the frequency of the key symbolism. 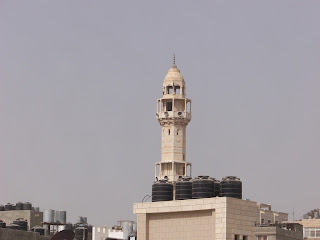 Access to water and electricity is iffy. One way to spot a Palestinian home is the water tanks on the room. Sometimes the supply is cut for hours or days with no warning. And water is a big deal in that part of the world. One Palestinian father told our delegation that when his daughters are able to travel outside the area, they don't talk about scenery. Instead, they say "It was the best shower of my life." 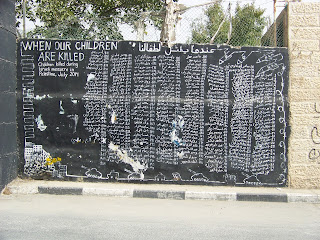 The wall built by Israel around 2004 has made life, work, and mobility difficult, but at least it's a place for murals. 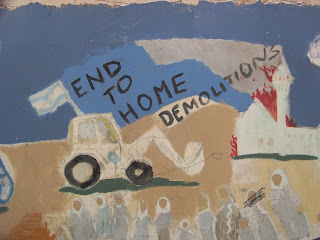 This is a particular sore spot for many Palestinians. 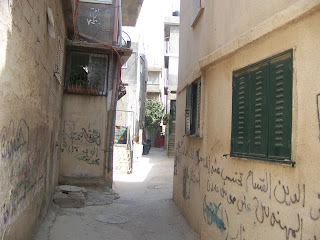 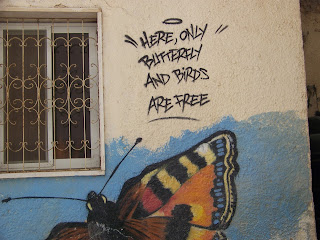 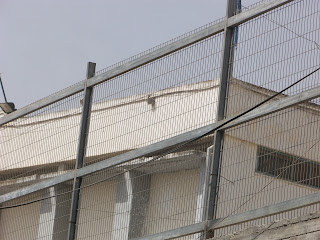 This is a school for Palestinian girls. There are no windows on the side facing the wall. This is intended to keep out bullets.

One more anecdote. One man who had three daughters recently found out his wife is pregnant with a boy. Traditionally, this is an occasion for joy, but he says he prefers girls. Life is very dangerous for boys and young men, who can be swept up in arrests. Children as young as 12 can be tried and sentenced in military courts, albeit "juvenile" ones.
by El Cabrero No comments: