In yesterday's post, I wrote about how SNAP (supplemental nutrition assistance program) rule changes proposed by the Trump administration could take away food assistance from one million school children.

Here's how: by changing eligibility for one, the proposed rule would change it for the other.

The USDA apparently realizes at some level that some folks out there actually want kids to eat, so they've reopened the public comment period. It will be open from Oct. 18 to Nov. 1.

Here's a link to make comments:

And here are some talking points.

I couldn't swear to this, but I wouldn't be at all surprised if those who make comments in defense of feeding kids will be reborn in the Pure Land of Amida Buddha, where they can work to attain enlightenment under the most favorable conditions. 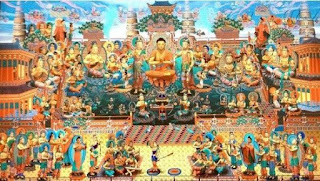 If you care about kids, get ready for another school food fight

It's on again. I've written before about threats to food security from the Trump administration, most recently here. It turns out that things are worse than I thought.

For review, Prince Joffrey's President Trump's administration proposed changes in eligibility for the SNAP program that could take away food assistance from over 3 million Americans and eligibility for free school meals to 500,000 kids. Turns out the latter figure is more like a million.

So they'll be hungry at home AND at school. Nice...

In fact, the USDA is soon going to reopen a public comment period on this for a two week period. Details to come.

Here's the latest word from the Food Research and Action Center (FRAC):

WASHINGTON, October 17, 2019 — A surprise release of data that the U.S. Department of Agriculture (USDA) should have disclosed earlier underscores the deep harm of its proposed rule to limit access to the Supplemental Nutrition Assistance Program (SNAP): eliminating food assistance for 3.1 million people and jeopardizing free school meals for nearly 1 million children.

Children who live in households that receive SNAP benefits are directly certified (automatically eligible) to receive free school breakfast and lunch. While the initial estimate showed that the rule could jeopardize more than 500,000 children’s access to free school meals, the new USDA analysis states that as many as 982,000 children could be impacted, with 497,000 children moving from free to reduced-price meals, and 40,000 completely losing eligibility for both free and reduced-price school meals. Rep. Bobby Scott (D-VA) noted in a statement, “Even for those who remain eligible, forcing low-income families to navigate the burdensome paperwork will inevitably lead to eligible children losing access to a critical source of daily nutrition.”

If this rule is enacted, children will be hungry at home and school. Since childhood hunger is linked to academic struggles, difficulties focusing and concentrating, mental health disorders, and increased behavioral referrals, many schools would struggle to meet the educational, health, and mental health needs of the students who lose SNAP benefits and as a result, access to free school meals.

The administration will reopen the public comment period for 14 days. Once it is reopened, FRAC will have a comment platform on its website where people can submit comments opposing this deeply flawed proposal.

I'll send word out when we know more, but here's some ammo for your comments: there's a new scientific study that shows free school meals (surprise) improve academic performance. Interestingly, this is true of both non-poor and poor kids.

Gird up thy loins for battle once again...
by El Cabrero 1 comment:

Today marks one of the hinges of American history, one that occurred in what is now West Virginia.

On the evening of Oct. 16, 1859, 160 years ago, abolitionist John Brown and 18 armed followers, black and white, left their hideout at a farm in Maryland to raid the U.S. armory at Harpers Ferry. Three were left behind as a rear guard.

Brown believed the raid would spark a slave rebellion that would eventually spread throughout the South.

He was a textbook case of what 19th Century psychology would call monomania, meaning the extreme preoccupation of a person with one overriding idea.

Think Captain Ahab, in Melville’s “Moby-Dick,” who was obsessed with the desire to avenge himself on the White Whale. Brown’s White Whale was slavery.

Born in 1800 to an anti-slavery family, he crisscrossed the country on various business ventures, all of which failed. He married twice and fathered 20 children, several of whom would be sacrificed for his cause.

His determination to fight slavery to the death crystalized in 1837 with the murder by a mob in Illinois of Elijah Lovejoy, who published an anti-slavery paper.

At a meeting discussing Lovejoy’s murder at a church in Hudson, Ohio, Brown stood up and declared, “Here, before God, in the presence of these witnesses, from this time, I consecrate my life to the destruction of slavery!”

When the controversy over slavery’s future in the Western territories grew violent, Brown and his allies, including his sons, joined the fight. His methods could be excessive. One night, in May 1856, Brown and his crew raided the homes of five men associated with the local pro-slavery movement and hacked them to death with swords.

This was just one episode in the violence that gave the place the name of “Bleeding Kansas,” with much of the bleeding done by antislavery settlers.

Brown believed that the mountains of what is now our Eastern Panhandle would be the perfect place to strike a fatal blow against slavery.

He said that, “These mountains are the basis of my plan ... God has given the strength of the hills to freedom; they were placed here for emancipation of the negro race; they are full of natural forts, where one man for defense will be equal to one hundred for attack; they are full also of good hiding-places, where large numbers of brave men could be concealed, baffle and elude pursuit for a long time.”

However, when it came time for the actual attack on Harpers Ferry, everything that could have gone wrong for Brown and his party did. Ten of his men died in the raid, along with six others, including Hayward Shepherd, an African-American baggage handler for the railroad. Most of Brown’s party not killed in the raid were captured by soldiers led by future Confederate Gens. Robert E. Lee and J.E.B. “Jeb” Stuart. They were later hanged.

Included in the raiding party were three free African-Americans: Anthony Copeland, Lewis Leary and Osborn Perry Anderson. Anderson was the only one to survive the ordeal. He would later join the Union Army during the Civil War. Dangerfield Newby was a former slave, while Shields Green had escaped slavery in South Carolina.

Newby’s case was particularly tragic. His wife, Harriet, and children were still enslaved and in danger of being sold south. In a letter that year, she wrote, “I want you to buy me as soon as possible, for if you do not get me some body else will.”

Newby joined Brown’s group after attempts to buy his family’s freedom failed. He was shot. His body was mutilated by locals. His family was sold shortly thereafter.

Green, nicknamed “Emperor,” met Brown in the company of Frederick Douglass. While Douglass declined to join the venture, Green said, “I believe I’ll go with the old man.”

Douglass would later say that Green “was not one to shrink from hardships or dangers. He was a man of few words, and his speech was singularly broken; but his courage and self-respect made him quite a dignified character.”

Green was captured and convicted but didn’t say a word during his trial. On the day of Brown’s hanging, Green sent word to Brown that he didn’t regret his fate and was glad to have fought with him. Green himself was hanged shortly after.

Brown told the court that, if he had done the same things to help the wealthy and powerful, he would have been called a hero. Because he chose to act on behalf of the “despised poor,” he faced death. He said, “if it is deemed necessary that I should forfeit my life for the furtherance of the ends of justice, and mingle my blood further with the blood of my children and with the blood of millions in this slave country whose rights are disregarded by wicked, cruel, and unjust enactments, I submit; so let it be done!”

The most fascinating thing to me about Brown is that he failed at everything but succeeded in his main goal of pushing the controversy over slavery to the point of no return, like the soldier in the Bob Dylan song who “won the war after losing every battle.”

Over the years, Brown has been called a martyr, a madman, a terrorist and more. I think of him as some kind of meteor forged by God or fate or chance, a monkey wrench destined to sabotage the machinery of slavery.

On this day, as the great African-American poet Langston Hughes wrote, “Perhaps you will remember John Brown.”