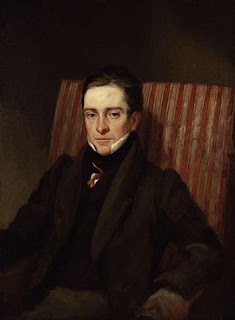 "No warmth, no cheerfulness, no healthful ease,
No comfortable feel in any member -
No shade, no shine, no butterflies, no bees,
No fruits, no flowers, no leaves, no birds -
November!"
- Thomas Hood, 1799-1845

That would be the month when yours truly arrived on this planet.
by El Cabrero 1 comment: 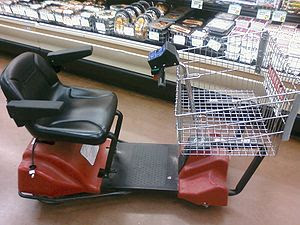 This one doesn't have a sign. Image by way of wikipedia.

Ordinarily, the Huntington WV Herald-Dispatch isn't all that interesting, but earlier this week a story caught my eye. It seems that two people were arrested for taking a motorized shopping scooter for a little ride on US Route 60 from a Wal-Mart to a local strip club at around 1:40 in the morning. A drink or two may have been involved.

I don't know about this one. It only seems fair to me that if Wal-Mart doesn't want you taking their scooters and tooling around on them on major roadways to strip clubs in the middle of the night after tossing down a few, they ought to have a sign telling you that straight out.

I mean, gee, without a sign like that how would you know? It could happen to anybody.

PLEASE READ THIS. It helps to explain why extending unemployment insurance is so important.

WHAT HE SAID. Here's a cool rant about the economy by a friend of mine.

MASSEYLAND. The tug of war between Massey Energy and MSHA just got extended.

Vanity of the bonfires 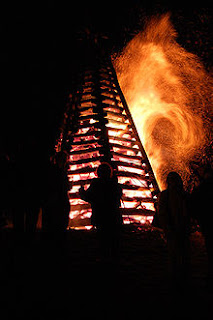 Ours wasn't this big.

Life on Goat Rope Farm is all about what Karl Marx once called "the idiocy of rural life." One rural tradition that we observed last weekend was an annual bonfire of scrap wood and brush unsuitable for the wood stove.

There is something fascinating about watching a bonfire. It's a primal thing. It makes me wonder what the old school Celtic bonfires of my ancestors were like. I probably will never find out, however, since I've been led to understand that there may be legal difficulties associated with the whole human sacrifice/wicker thing.

People have often used bonfires to get rid of things considered to be undesirable. The phrase "bonfire of the vanities" was used to describe one such kindled by the inhabitants of Renaissance Florence under the influence of the puritanical monk Savonarola long before it became the title of Tom Wolfe's 1980s novel.

Watching ours reminded me of one of Nathanial Hawthorne's short stories, "Earth's Holocaust." In it, social reformers make a huge bonfire of all things associated with the evils of the old society.

Towards the end, a few remaining malefactors are despairing over the dawn of a pure new era. They are reassured, however, by a dark stranger who has been grinning through out the whole proceeding. He tells them,

"There is one thing that these wiseacres have forgotten to throw into the fire, and without which all the rest of the conflagration is just nothing at all; yes- though they had burnt the earth itself to a cinder.'

'And what may that be?' eagerly demanded the last murderer.

'What but the human heart itself!' said the dark-visaged stranger, with a portentous grin. 'And unless they hit upon some method of purifying that foul cavern, forth from it will reissue all the shapes of wrong and misery-the same old shapes, or worse ones-which they have taken such a vast deal of trouble to consume to ashes. I have stood by, this live-long night, and laughed in my sleeve at the whole business. Oh, take my word for it, it will be the old world yet!'

Now that's a cheery thought for the day.

A SUPERHERO FOR OUR TIMES. It's a bird! It's a plane! No--it's Unemployed Man!

CUT THE CUTS. A new poll finds that only one third of Americans supports extending Bush era tax cuts for the wealthiest.

MASSEY IN THE NEWS. Mediation efforts broke down in a case involving coal slurry injections, which means a trial is in the works. Meanwhile the company is blaming natural gas for the Upper Big Branch mine disaster. 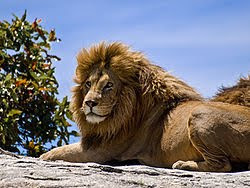 I've always loved philosophy, but there are certain schools of it that do nothing for me. Among these are logical positivism, analytical philosophy and schools that focus on things like grammar and language. Life's too short.

One person who has connections to those schools enjoys a huge international following: Ludwig Wittgenstein. I don't get the attraction.

A while back, someone loaned me a copy of what many people consider to be his masterpiece, Philosophical Investigations. I dutifully waded through it in hopes of changing my mind. It didn't happen, although there were a few good lines here and there.

I'm about to take issue with one of the most famous of those. In that book, Wittgenstein said, "If a lion could talk, we could not understand him." That might be true of things like sea cucumbers, but lions are mammals and we share a lot of similarities in the brain with them, especially in those regions of the brain that have to do with emotions.

I don't think that lions particularly need to talk, although one could argue that they already do non-verbally. But if they did, I think it would be pretty clear. I also have a feeling that most of what they would say would take the form of commands and declarative statements.

They probably wouldn't ask a lot of questions. Or need to.

CUTTING ALONE WON'T DO IT. People concerned about deficits would do well to think less about across the board cuts than about promoting economic growth, according to this analysis in the NY Times.

UPPER BIG BRANCH. Here's an interesting twist in the Massey mine disaster investigation.

PREJUDICE. Scientific research suggests it may be more ingrained than we like to think, but there are ways of countering it.

MORE ON THOSE NEANDERTHALS. Maybe the human edge over our Neanderthal cousins had something to do with our slow growth to maturity.

Your good deed of the day

Today's post is going to be short if not sweet. Please take a few minutes today to call your senators and congressional representatives and urge them to act now to extend unemployment insurance.

As I noted yesterday, if this doesn't happen in the lame duck session of Congress it may not happen at all, which will mean more misery for millions of Americans still stranded in the wake of the worst downturn since the Great Depression.

Here's a toll-free number courtesy of the WV AFLCIO:

and here's another supplied by US Action:

SPINE OR NO SPINE? Time (but not a lot of it) will tell for the lame duck congress.

ONCE UPON A TIME, political leaders used to think big about creating full employment.

BELIEVE IT OR NOT, Americans believe some weird things.

DON'T DRINK THE WATER. Hundreds of residents of southern WV headed to Charleston for mediation in a lawsuit against Massey Energy over contaminated water from coal slurry injections. 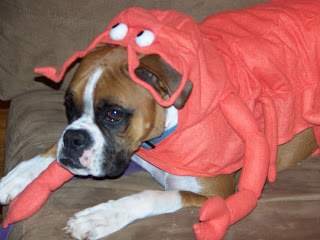 Random animal picture, this one being of Little Edith Ann at Halloween, yet another reason why dogs hate that holiday.

The lame duck session of Congress that begins today has some serious business to take care of, provided it has the guts and will. Around two million Americans are going to exhaust unemployment benefits in December. In West Virginia, the number is around 11 thousand. The numbers will only get worse in 2011.

This needs to happen, given that there are around five jobless workers for every new job that opens up. And economists are expecting sluggish job growth for the next year or two, maybe longer. Ideally, the extension should last for a year.

Ever since the 1950s, Congress has acted to extend benefits when unemployment was 7.2percent or higher and we're way about that point now.

This extension has to happen in the lame duck session because the new majority in the House is not likely to do it. I'd really like to be wrong about this, but I think it's a good bet that the new majority will be hostile to anything that benefits working people, the unemployed and people in poverty. And for all their talk about fighting deficits, you can bet that they'd like nothing more than to extend Bush era tax cuts for the rich indefinitely.

There is something we can do about this. Tomorrow, Nov. 16 is a national call-in day to Congress to extend unemployment. The WV AFLCIO is urging people to participate in the call-in campaign tomorrow and has provided a toll free number: 1-877-662-2889.

Please take a minute to make the call. This is an all-hands-on-deck situation.

MEANWHILE, BACK AT THE RANCH, here's yours truly on the need for the WV legislature to take some action of its own on unemployment insurance modernization.

CAVING (METAPHORICALLY SPEAKING). The White House, that is. Maybe.

SPEAKING OF METAPHORS, they seem to live in certain regions of the brain.

ANOTHER FIGHT IN THE WORKS is preventing repeal of health care reform.

SOMETHING ELSE TO DENY. Melting glaciers. It might be a bit harder to deny rising sea levels in the future though.