I love this song by Leonard Cohen. I really wish he was right about it. Here's an extract:

The Reefs of Greed and the Squalls of Hate seem pretty dangerous these days.

The rest of the lyrics can be found here.

Happy 4th! Goat Rope will reappear Tuesday unless something really bad or good happens.
by El Cabrero No comments:

The worse, the better?

Among the books in my current pile is William Shirer's The Rise and Fall of the Third Reich. I'm only 300 pages into it, which is to say less than a third of the way through. So far it's provided a lot of food for thought.

Here's one: there is a school of thought among political extremists of various stripes that holds that the worse things are, the better they are. For example, such people think it's great when the economy or the political situation is really bad because this will presumably radicalize people and result in major change.

I don't believe there is a lot of historical evidence for this. It often works just the opposite. In the 1930s, for example, some German leftists and communists actually welcomed the Nazi rise to power on the theory that this was a temporary thing that would ultimately catapult them to power. The slogan was, "After Hitler, us." Many of them died in concentration camps.

UPPER BIG BRANCH. Here's an item from The Nation on the disaster fallout. And here's an editorial from the Charleston Gazette about the need for more criminal prosecutions.

A LINE IN THE SAND. Paul Krugman calls on President Obama not to cave (again) in negotiations over the debt ceiling. 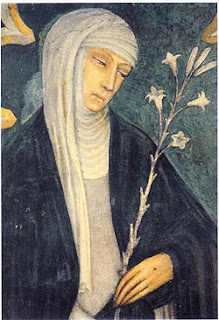 I would be remiss in my husbandly duties if I didn't mention that the Spousal Unit has recently started a blog of her own.

She was selected this year to be one of 16 participants in a six week long Dante seminar for educators which is being held in Siena, Italy. Yes, it's another one of those dirty thankless jobs, but somebody's got to do it. The blog is all about Dante and the trip, with lots of pictures. I'm going to try to get there for a week or so in July.
A nun friend told me to be sure to check out the head of St. Catherine of Siena (1347-1380), which is now kept in that city's Basilica of San Domenico. Apparently, her thumb is there too.

The story goes that her body was kept in Rome after her death but some intrepid (and possibly over-zealous) monks removed the head and snuck it back to Siena, concealing it in a bag. For that reason, she is sometimes said to be the patron saint of contraband.

When I get there, I'll be sure to check it out. Meanwhile, thanks to my friendly nun for the (groan) heads up.

SO WHAT CAN WE AFFORD, ACTUALLY? A new report estimates that our current wars could wind up costing $4 trillion, not counting a bunch of dead and wounded people.

COOKING THE BOOKS. Here's the latest from the federal investigation of Massey Energy's Upper Big Branch mine disaster. Meanwhile, criminal investigations of the company may go farther up the chain.

Hats off to Vermont Senator Bernie Sanders for kicking up dust on the deficit reduction debate. Here's an extract from a recent letter of his to President Obama:

This is a pivotal moment in the history of our country. Decisions are being made about the national budget that will impact the lives of virtually every American for decades to come. As we address the issue of deficit reduction we must not ignore the painful economic reality of today – which is that the wealthiest people in our country and the largest corporations are doing phenomenally well while the middle class is collapsing and poverty is increasing. In fact, the United States today has, by far, the most unequal distribution of wealth and income of any major country on earth.

Everyone understands that over the long-term we have got to reduce the deficit – a deficit that was caused mainly by Wall Street greed, tax breaks for the rich, two wars, and a prescription drug program written by the drug and insurance companies. It is absolutely imperative, however, that as we go forward with deficit reduction we completely reject the Republican approach that demands savage cuts in desperately-needed programs for working families, the elderly, the sick, our children and the poor, while not asking the wealthiest among us to contribute one penny.

Mr. President, please listen to the overwhelming majority of the American people who believe that deficit reduction must be about shared sacrifice. The wealthiest Americans and the most profitable corporations in this country must pay their fair share. At least 50 percent of any deficit reduction package must come from revenue raised by ending tax breaks for the wealthy and eliminating tax loopholes that benefit large, profitable corporations and Wall Street financial institutions. A sensible deficit reduction package must also include significant cuts to unnecessary and wasteful Pentagon spending.

Please do not yield to outrageous Republican demands that would greatly increase suffering for the weakest and most vulnerable members of our society. Now is the time to stand with the tens of millions of Americans who are struggling to survive economically, not with the millionaires and billionaires who have never had it so good.

WHAT THEY SAID. Key WV legislators warn Senator Manchin about the dire consequences to the state if Medicaid is cut. Manchin has never been much of a fan of that program. Or of poor people.

ON THAT NOTE, proposed cuts to Medicare could also hurt seniors.

Thought for the day 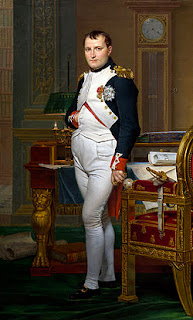 Never interrupt your enemy when he is making a mistake.

PROTECTING THE POOR. A number of national organizations urge leaders to support an approach to deficit reduction that won't increase poverty.

I used to think I was a pretty good BS artist. It kind of comes with being a hillbilly. But this weekend, I was dealt a lesson in humility and now realize I am just a piker.

It went like this...a week or so ago, the Spousal Unit and I went on a hike in the hills surrounding Goat Rope Farm. As usual, we took a camera and got a cool picture of a black snake.

Now, it is a truth universally acknowledged that a blogger in possession of a snake picture must do something with it. I scanned the web in search of a good snake poem for the weekend post. In doing so I discovered that there is something of a shortage of good snake poems.

I did, however, find a fragment of one by Percy Bysshe Shelley that appeared to have been written after said poet hit the laudanum a bit too hard. In case you missed the weekend post, here it is:

Wake the serpent not -- lest he
Should not know the way to go, --
Let him crawl which yet lies sleeping
Through the deep grass of the meadow!
Not a bee shall hear him creeping,
Not a may-fly shall awaken
From its cradling blue-bell shaken,
Not the starlight as he's sliding
Through the grass with silent gliding.

I then asked whether any reader had any idea what Shelley was talking about. Who should step up to the plate by my father-in-law who sent me an email that read in part:

Shelley's poem, is a romantic affirmation of the dreaming state, which to the snake--and to the poet--is often more colorful and meaningful than waking reality. But if you were to ask Shelley to explain the meaning of the poem, he would probably read it, then read it again, pause a while, and read it again. Then he would say, "I don't know what the hell I meant by that poem!"

So I guess we can interpret it in any way we want, and all of us would be right. But let's make another attempt at understanding it: the snake is evidently asleep through the entire segment of the poem. His dreaming journey is not yet finished. So we should not wake him to interrupt that dream.

"Let him crawl which yet lies sleeping...." includes what follows of his dream. If he were awake, and taking this same journey through the grass, would he devour those things he would come across? Perhaps that is why we should not wake the sleeping serpent. As long as he is asleep, he is harmless.

Another interpretation, far more esoteric: can the serpent represent evil? If so, then we should let evil sleep. Once we arouse evil, it can destroy us. It's like that old West Virginia mountain saying: "Let sleeping dogs lie."

Holy hermeneutics, Batman! I know when I've been out-gunned. Now that he primed the pump, I can see a whole range of interpretations. Aside from the obvious Freudian one, it occurs to me that the snake, like most creatures including humans, runs on automatic pilot most of the time, which is analogous to being asleep.

Hats off to you, Pops!

OUT OF AFGHANISTAN. Here's WV's Senator Joe Manchin calling for a stepped up troop withdrawal.

IT'S HAPPENING, BUT WILL WE GET OUR ACT TOGETHER? Here's a fairly optimistic view of how we might finally respond to climate change.

SUGGESTIONS ON FOCUSING YOUR MIND here.