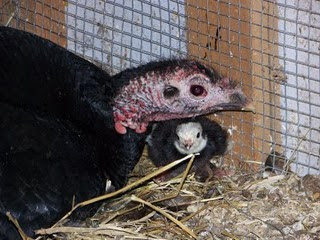 We had another casualty on Goat Rope Farm this week. Frida, an elderly female turkey, was killed by some kind of varmint whilst engaged in another effort to hatch some eggs. Frida took the whole reproduction thing very seriously, although she only had one live chick (turkey puppy?) in her time here despite many efforts...and an owl got it. May she be reborn in the Pure Land of Amida Buddha.

We remember her and many other humans and animals that have passed this weekend.

See y'all again Tuesday. I hear it might actually not rain for a day or two this weekend and I have hot dates planned with fences, gardens and such.
by El Cabrero No comments:

El Cabrero's beloved state of West Virginia is one of several places in which the ruling class has a vested interest in denying or minimizing the reality of climate change. I have a feeling that's going to get a bit harder to do as we witness more and more extreme weather events around the world.

I was as shocked as anyone watching the devastation wrought by the giant tornado that hit Joplin, Missouri, and the one before that as well. It's not just human empathy; it's also the uneasy feeling of having dodged one bullet when you know that another one out there might have your name on it.

Still, I wonder what it will take to goad the US into meaningful climate action...and whether it will be too late to do any good...and how people in the future will look at those who tried to block it.

One final thought. I know a person who likes to make jokes about global warming. He has a beautiful child. I have so far restrained my self from saying something like, "Why don't you write that down in a book and give it to your kid and let her see how funny it looks in a few years."


THE RYAN PLAN to gut Medicare has hit a snag or two lately. The fight is about to shift to Medicaid.

JUST CHECK IT. Coal related stories are coming fast and furious in the wake of the publication of the report on the Upper Big Branch mine disaster. The best way to keep up is to keep checking Ken Ward's Coal Tattoo blog.

Hey, it's worked before

Apparently the board of directors of Massey Energy came up with a time tested way of shifting public attention away from their less than stellar safety record: blame the black guy. According to Bloomberg,


Massey Energy Co. (MEE)’s management believed government officials, including President Barack Obama, conspired to destroy the coal producer, according to unsealed court records in a case related to a fatal mine accident.

SO MANY BAD IDEAS, SO LITTLE TIME. Here's something on the latest bad budget idea to get consideration in the Senate.

A LITTLE GOOD NEWS. The Ryan plan to gut Medicare and Medicaid was voted down in the Senate yesterday. The Ryan plan was a factor earlier this week in the victory of a Democrat in a heavily Republican district in New York.

ALLIGATOR LOVE. The males "sing" when they want female companionship, making some weird noise with their backs that is too low to be heard. Don't try this at home. 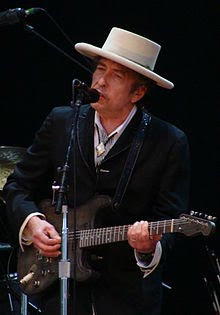 I knew it was coming but somehow it slipped my mind. Yesterday, May 24, was the 70th birthday of a certain Robert Zimmerman, aka Bob Dylan. I have never met Bob, although I've seen him in concert several times. But I can say that it feels like I have a deep karmic connection to his music.

Many times, before I even knew who he was, I was stopped dead in my tracks by his songs, whether performed by him or by someone else.

I am a bit younger than those who first fell under his spell. But I recall as a kid a time my late brother came home from college and plucked out "Blowin' in the Wind" and being stunned by the words.

(As I grew up, I must confess a greater affinity for the older, more cynical, Bob than for the younger idealistic one. But still, there it was.)

I recall other moments growing up when certain Dylan songs, like Knocking on Heaven's Door or Tangled Up in Blue just froze me up where I was standing. Eventually, I figured out who this guy was and started listening to his music.

There's one question that I'd really like to know at some point. Does he really know what he's writing when he writes the lyrics or is he just a vessel of the Muses? I remember being at an Arlo Guthrie concert one time when he speculated that Bob fished upstream from other songwriters and just caught more than they did.

However it happened, he has the power of the Word. And I even like the voice that delivers it. The raspier the better.

SPEAKING OF WHOM, some birthday tributes can be found here
and here.

RAKING IT IN. Massey Energy executives stand to profit big time in a sale to Alpha Natural Resources if the deal goes through, in spite of playing games with the lives of coal miners. My best advice is that the Gentle Reader make Ken Ward's uber-blog Coal Tattoo a regular site to visit.

STRANGE AS THIS WEATHER HAS BEEN. Bill McKibben suggest a connection between climate change and extreme weather events here. I think he's right.

BECAUSE I NEED TO SLEEP AT SOME POINT, this post has been scheduled for publication in advance. Well may the world go and I'm against anything bad that happened between then and now.

No time to ramble today, but here are a few items that caught my eye:

FAMILIES CHALLENGE MASSEY SALE. A lawsuit is in the works challenging the sale of Massey Energy to Alpha Natural Resources in the wake of the Upper Big Branch disaster and the facts that have emerged since it occurred in April 2010.

SPEAKING OF POLITICS, bees have an interesting system.

WHEN SPIDERS ATTACK,they do it really well.

I guess the Rapture didn't happen as predicted. That kind of took me off guard given the uncanny accuracy of other predictions of the end of the world.

I would have been OK with it. I figure if I made the cut, most of my problems would be solved. On the other hand, if folks of the more fundamentalist persuasion disappeared, it would probably do wonders for the high school biology curriculum. Plus, my car has almost 300,000 miles on it and a free upgrade would have been kind of nice.

(By the way, a friend of mine passed on a suggestion late last week that a good prank would have been to leave pairs of empty shoes with dry ice in them in public places to freak people out.)

THE FIRST COMING. Here's Adam Gopnik on Jesus as an historical figure.

MORE REACTIONS to the Upper Big Branch mine disaster investigation report keep coming. Here's one from The Rolling Stone.