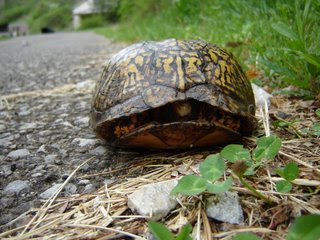 The turtle lives 'twixt plated decks
Which practically conceal its sex.
I think it clever of the turtle
In such a fix to be so fertile.--Ogden Nash 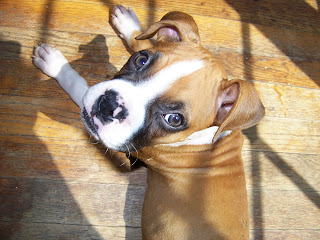 Lately there have been many news reports and expressions of public anxiety about the growing federal deficit. In his blog, Nobel laureate and NY Times columnist Paul Krugman asks an interesting question: "what would things look like if we hadn’t had 8 years of gross fiscal irresponsibility from the Bush administration? "

Here's what he had to say:

There were two big-ticket Bush policies. One was the tax cuts, which cost around $1.8 trillion in revenue; add in interest costs, and we’re presumably talking about more than $2 trillion in debt. The other was the Iraq War, which has cost at least $700 billion, and will cost more before we finally extract ourselves.

Without these gratuitous drains on the budget, it seems fair to assert that we’d be coming into this economic crisis with a federal debt around 20 percent of GDP ($2.8 trillion) smaller than we are. And that, in turn, means that we’d be looking at projected net debt in 2019 of around 50 percent of GDP, not 70...

The bottom line, then, is this: the irresponsibility of the Bush years has left us poorly positioned to deal with the current crisis, turning what should have been an easily financed economic rescue into a more difficult, anxiety-producing process.

BEEN DOWN SO LONG. There is some evidence that the longest lasting recession since WWII may be easing.

PANTS ON FIRE. This item seeks the truth about the nature of lies. 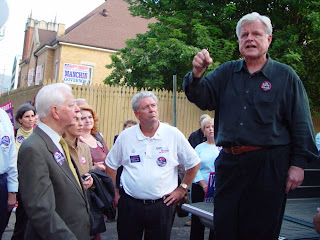 The top story (at the moment) in today's New York Times notes that the death of long time health care reform supporter Senator Ted Kennedy adds a new and volatile element to the ongoing debate:

The death of Senator Edward M. Kennedy has quickly become a rallying point for Democratic advocates of a broad health care overhaul, a signature Kennedy issue that became mired in partisanship while he fought his illness away from the Capitol...

It seemed unlikely that Republicans would suddenly soften their firm opposition in the aftermath of Mr. Kennedy’s death or that Democrats would relent on their push for substantial change, especially for a government-run insurance plan, which Mr. Kennedy endorsed.

But Democrats and others said the senator’s death should provide at least a temporary respite from the angry denunciations that flowed this summer, putting Democrats on the defensive as they met with voters back home. One advocacy group opposed to the Democratic proposals, Conservatives for Patients’ Rights, announced that it was suspending its advertising out of respect for the senator and his family.

"In his honor and as a tribute to his commitment to his ideals, let us stop the shouting and name calling and have a civilized debate on health care reform which I hope, when legislation has been signed into law, will bear his name for his commitment to insuring the health of every American."

WHO OWNS APPALACHIA? For the most part, not the people who live there.

The Rev. Vernon Johns (1892-1965) is widely regarded as a father of the Civil Rights movement. In Taylor Branch's book about that struggle, Parting the Waters, he is described as a forerunner of Martin Luther King Jr.

He literally preceded King as pastor of the Dexter Avenue Baptist Church in Birmingham, Alabama. Johns was a pastor for a time in the capitol city of El Cabrero's beloved state of West Virginia.

I was reminded of Johns yesterday when a friend of mine who is a pastor and a leader in that city's African American community said that when Johns was a child, his father gave him this advice:

I don't know about y'all but that works for me. It seems to apply pretty well to the current struggle over health care but I think it has broader application as well.

SPEAKING OF WHICH, there was a rally in support of health care reform in Charleston yesterday. I was all ramped up to go but was unhorsed by car trouble. Some days you eat the bear and some days the bear eats you.

(Parenthetically, it's ironic that Mass. Senator Ted Kennedy died when this issue, a longtime passion of his, is on the public agenda. I wonder what effect if any his passing will have on the debate.)

ON THE SUBJECT OF HEALTH CARE WHACKADOODLEISM, here's a good one from a few days back.

DEFICITS. Here's an analysis of what did and didn't cause the federal deficit.

The word for the month is... 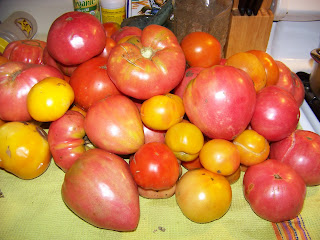 Caption: Are these innocent tomatoes or evil aliens?

...whackadoodle. It can serve as either a noun or adjective and works really well with:

*conspiracy theories about the alleged Kenyan birth of a certain elected official;

*baseless rumors about a massive round of federally funded--or mandated--abortions;

*the idea that a public health care option (which already exists in several forms, including Medicare, Medicaid, the Veterans Administration; TriCare for military families, etc.) amounts to Soviet-style collectivism;

and any number of related scenarios about health care reform.

AND HERE'S MORE on the same subject from the New Yorker.

SINCE WE'RE SORT OF TALKING ABOUT psychology, here's something from the American Psychological Association about why many people aren't taking climate change seriously enough.

TO SLEEP, PERCHANCE TO DREAM. This item looks at the biological and evolutionary functions of sleep. 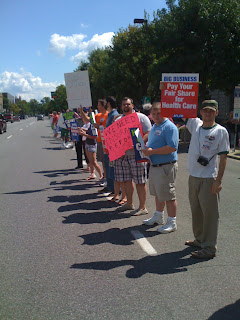 A street action in favor of health care reform in Huntington, WV this Saturday.

Goat Rope is back in regular operating mode this week following a two week furlough. Thanks to people for the comments and emails over the last stretch about the favorite books series. I haven't responded yet as I wasn't supposed to have access to email and such during those two weeks.

One thing I didn't do was take a break from the struggle over health care reform. In WV as around the country there have been many town hall meetings and public events and actions.

This season may well be remembered as Whackadoodle Summer as astroturf crowds tried to shout down public meetings and bizarre conspiracy theories about the diabolical idea of covering all Americans grew like mushrooms after a summer rain.

It all kinda reminded me of a famous essay by historian Richard Hofstadter titled The Paranoid Style in American Politics, which is alive and well.

All of which is to say, if want to have something to say when your grandkids ask you what you did in the big fight over health care, now would be the time to speak out, write letters, contact your congressional delegation, participate in forums and actions and all that.

BULL COOKIES. Here's a bull cookie-free op-ed on health care by one of the most progressive members of the WV legislature.

THE GHOST OF REAGAN still haunts the land.

THIS IS YOUR BRAIN under stress.