The generosity of the universe 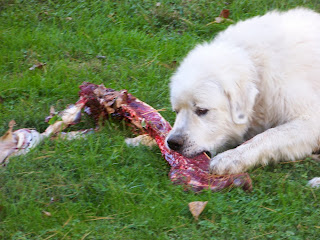 Arpad (pronounced Ar-pod), our Great Pyrenees and security chief for Goat Rope Farm, loves this time of the year. As deer hunters hit the woods, they often leave behind such tasty offerings as legs and spines, sometimes both all joined together. These are sources of delight for a good month or two starting when the leaves start to turn.

The above picture shows his treasure haul for the day. And the season is still young.

For Arpad, it's proof that the universe is bountiful and generous. It's all good. The Pod abides.

HOW BOUT THOSE POLLS? It looks like the government shutdown/hostage crisis thing hasn't worked out too well for House Republicans.

A GRIEF OBSERVED. My friend the Rev. Jim Lewis recently lost his wife Judy after a long battle with cancer. Here are some of his reflections on dealing with loss.

ELEPHANTS get the point. Too bad some people don't.

ENDING THE (REAL) HUNGER GAMES. Here's a look at some recent reforms that provide free meals for all schoolchildren. We're working on that in WV.

WE KNOW FROM "OKLAHOMA" that the farmer and the cowman should be friends. Apparently, it wasn't that easy even thousands of years ago.

Republican extremism in the US House is driving a wedge between Tea Party Whackadoodles and big business groups, according to the New York Times. Meanwhile, Nicholas Kristoff calls out the "gang of 40" here.

It looks like the shutdown/hostage crisis isn't gaining Republicans too many popularity points, as another poll suggests. AND the threats are causing consumer confidence to sink.

Talk about a goat rope. It's another example of government by artificial crisis of the kind we've been seeing for the last couple years. Who knows how much damage will be done. It looks like the biggest losers will be the American people.

It's becoming increasingly clear that what lies behind the mania of the US House majority to shutdown the government and crash the economy is fear that the Affordable Care Act will succeed.

I mean think about it. If "Obamacare" was a disaster, the thing to do would be let it roll out, capitalize on how bad it is, and ride that wave to victory. As Napoleon was supposed to have said, "Never interrupt your enemy when he is making a mistake." That isn't happening. Instead, West Virginia alone, over 50,000 people have signed up for the expanded Medicaid program since Oct. 1.

I wonder how much damage the Whackadoodles will do before it's over, but I don't think they are going to be able to put the genie back in the bottle.

AND THEN THERE'S THIS: a recent poll shows that a majority of Americans don't think the shutdown crisis should be linked to Obamacare funding.

HIGH SCHOOL GRADUATION. Here's a look at why it matters.

BOOMS AND BUSTS. Here's a call for WV leaders to get real about the future of coal. I'm not holding my breath on this one.

I mentioned in an earlier post that I was sidetracked from running for around three months with plantar fasciitis, an irritating condition which is the next best thing to having a nail in your heel. It seems to be slowly easing its grip on my foot and I've started to limp/jog again, even hitting the three mile point today (we will not discuss speed).

A while back, my daughter, La Cabrita, pointed out that there is a marathon in October in one of my favorite places, Harper's Ferry. Aptly named Freedom's Run, it coincides closely with the anniversary of John Brown's raid. And El Cabrero is all about John Brown.

It'll take me a long time to catch up to where I was this spring, running-wise, and even longer to get ready for a marathon, assuming I stay injury free. But in a year...

OK, so I've had some heart issues and two bad knees and can barely limp a few miles. Whatever. It is SOOO on.

This one's for the wild man with the beard.

THE OTHER GREAT DIVIDE. There's not only an economic gap between rich and poor. There's also an empathy gap.

SINCE I WAS ALREADY AT THE TIMES, I scooped up the latest Krugman here on the government shutdown.

A LITTLE GOOD NEWS. It looks like WV legislators are studying ways of promoting physical activity for kids.

I had a great conversation this weekend with a co-worker about dreams. We both agreed that some dreams are just like mental static, as in maybe the brain doing its filing or routine paperwork. Other dreams, however, knock us on our butts and speak from a very deep level.

My friend, a real lover of peace, had a dream that told her that working for justice where we live really is like being in a war, even though we don't hurt anybody. I totally agree.

My dream went in a different direction. It went something like this: as a practical joke, I and several other people convinced someone as that they needed to go through an elaborate ritual that we just made up. The person agreed in good faith and those of us in on the joke pretended to carry it out, even though we laughed so hard that we fell down at times.

At some point, though, I realized that however absurd the ritual we concocted was, the person in question took it seriously and really needed it and derived some real benefit from it. So I knew we had to stop laughing and carry out the ritual (the nature of which escapes me) as if it was real with all the dignity we could.

I guess the take home message from that one is that even though some things people believe seem like nuts to me, I need to realize that they need them and derive some benefit from them.
by El Cabrero No comments: