Wrapping up a week

In case you missed it, Krugman was on again today, talking about growing inequality and a recovery that mostly benefits the rich.

STILL WAITING FOR JUSTICE. Here's my friend Ken Ward at Coal Tattoo musing on the ongoing federal criminal investigation of Massey Energy's Upper Big Branch disaster. I know where some of us would like to see that go.

NOT SURE THIS GUY MADE IT. NASA has confirmed that a frog somehow got into a photo of a launch last week. I wouldn't bet much on his well being.

UGLY ANIMAL CONTEST. My vote is definitely for the blobfish.

FIRST, the AFLCIO is taking another look at what organizing means. This approach reminds me of an old idea from the Industrial Workers of the World (IWW), to wit, people have a union when they act like they have one.

Looking down on the world 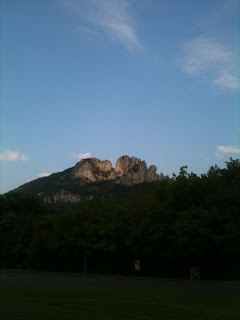 Today I decided to hike to the top of Seneca Rocks, one of West Virginia's most beautiful sites. 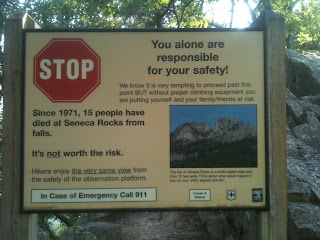 There was some good advice along the way, although it wasn't taken. 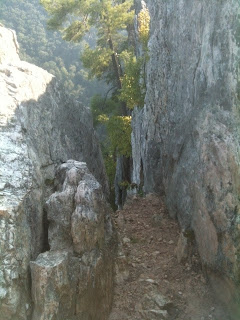 The view of the top was interesting. 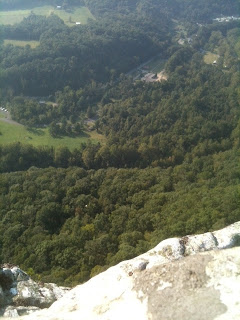 As was the view from the top.

Note: these photos were taken with the Precious (aka iPhone). It would probably have been much cooler with a real camera.

A champion for children (and someone else completely different)

Last Friday I  had the opportunity to attend an event celebrating the Children's Health Insurance Program which featured on of the key architects of that law, to wit WV's senior senator Jay Rockefeller. During the program, several medical and mental health professionals spoke about the benefits of the program, which also covers dental and mental health.

CHIP, enacted in 1997 in Congress and expanded repeatedly in WV since then, now covers children in families earning up to 300 percent of the federal poverty level. It has made a huge impact in health coverage. One number I've heard thrown around is that since the program began, around 40 million children have benefited from the program.

That is quite a legacy and may be the greatest of Rockefeller's many contributions.

MEANWHILE, ON THE DARK SIDE, WV Attorney General Patrick Morrisey and his rich friends don't have to worry about affording health care. So instead they worry about how to keep others from getting it. Nice.
by El Cabrero 1 comment: