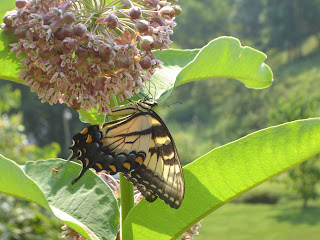 "Just living is not enough" said the butterfly,
"one must have sunshine, freedom and a little flower."
- Hans Christian Andersen
by El Cabrero No comments:

Email ThisBlogThis!Share to TwitterShare to FacebookShare to Pinterest
Labels: butterflies

The nick of time 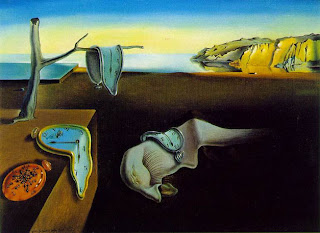 The Persistence of Time, Salvador Dali.

Thoreau's Walden rambles all over the place, but it continually challenges the reader by returning to the topic of time, especially that part of it which is happening right now:

As if you could kill time without damaging eternity.

I guess one could say that this is a main theme of the book. Here's just one sample:

In any weather, at any hour of the day or night, I have been anxious to improve the nick of time, and notch it on my stick too; to stand on the meeting of two eternities, the past and future, which is precisely the present moment; to toe the line

It sounds easy, but it's one of the hardest things to do.

GULF DISASTER. Here's Jim Wallis on the BP mess. And by the way, Halliburton's political donations are up these days. Could there be a connection?

YOU PROBABLY REALLY DON'T WANT TO LOOK at these pictures of animals caught in the spill.

NOT THE BEST PR MOVE. Here's a statement by the American Friends Service Committee on the attack by Israel on a ship bringing humanitarian aid to Gaza. While we're at it, here's Kristof's NY Times op-ed on the subject.

PETS AND HUMAN RELATIONSHIPS. The way we deal with the former may not be bad for the latter. 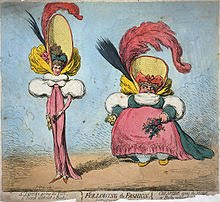 El Cabrero has been wandering through Thoreau's Walden again lately and this time around particularly enjoyed his comments on clothing, a topic towards which I have been pretty oblivious.

The main things I look for in an outfit is that it not be too formal or dressy as such forms of raiment generally suck my will to live. Beyond that, I'm pretty content if what I have to wear is something I can run, kick or generally move around in. Old clothes work particularly well for these purposes.

For that reason, I've always loved this saying of his:

I say, beware of all enterprises that require new clothes, and not rather a new wearer of clothes. If there is not a new man, how can the new clothes be made to fit? If you have any enterprise before you, try it in your old clothes. All men want, not something to do with, but something to do, or rather something to be. Perhaps we should never procure a new suit, however ragged or dirty the old, until we have so conducted, so enterprised or sailed in some way, that we feel like new men in the old, and that to retain it would be like keeping new wine in old bottles.

(I did buy new karate gis for the Okinawa trip, but I think that would meet his criteria.)

Historically speaking, clothing has often been more about displaying social status than protection from the elements, comfort or even aesthetics. Some societies even had sumptuary laws, which specified exactly who could wear what. Thoreau once again had a great zinger on this point:

It is an interesting question how far men would retain their relative rank if they were divested of their clothes. Could you, in such a case, tell surely of any company of civilized men, which belonged to the most respected class?

(That reminds me of an old joke which suggests that such a practice at weddings might lead to a re-evaluation of the term "best man.")

Here's one last jab at the world of high fashion, which may or may not have changed all that much since his time (not that I would know):

The head monkey at Paris puts on a traveler's cap, and all the monkeys in America do the same.

AN OXYMORON? In the wake of the BP Gulf disaster, Presidenet Obama has vowed to push for a clean energy bill.

EDUCATION REFORM is all the rage these days. Here are some things to think about during the "race to the top." Meanwhile,it looks like the rush to reform has slowed down in West Virginia.

A GRAND ILLUSION. One study suggests that the morning coffee boost may be an illusion. Fine. I need at least three cups of illusion each morning.

So much for the pyramids 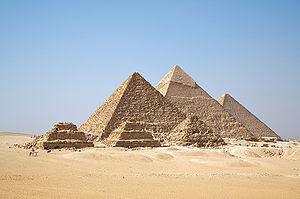 I'm not sure if I'd enjoy hanging out with Henry David Thoreau, given the chance. He seems to have been a bit of a crank. But I love reading him. It is an under appreciated fact that many of the classics of American literature are not only good reading but are laugh out loud funny.

Lately, I've been re-reading Walden, a work I revisit every few years. It really is a rich and funny book and some of his barbs strike home.

Here's one that speaks to my condition on the farm these days:

That sounds like a man who knows a thing or two about goats.

The book is also full or random zingers, like this one on the wonders of ancient Egypt:

As for the Pyramids, there is nothing to wonder at in them so much as the fact that so many men could be found degraded enough to spend their lives constructing a tomb for some ambitious booby, whom it would have been wiser and manlier to have drowned in the Nile, and then given his body to the dogs.

(For the record, El Cabrero thinks pyramids are kind of cool.)

Don't be too surprised if old Henry shows up here again soon. There are plenty of nuggets where those came from.

WALL STREET "WISDOM." Here's economist Dean Baker's latest rant about Wall Street and the deficit hawks. I think it's a pretty good one.

THE POLITICS OF DISGUST are discussed here.

Q & A. Here's the latest edition of the Rev. Jim Lewis' Notes from Under the Fig Tree. Those who have been following his static with the Episcopal diocese of WV may want to check it out.

MY HOLY LAND. Regular readers of this blog will find this familiar, but here's an article I wrote for the Gazette about my Okinawa trip. Some of it got cut but you'll have that.

If cattle had hands... 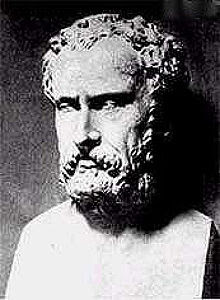 The ideas that individuals and groups have about God and/or the gods tells us a lot about the former but not necessarily anything about the latter. As the pre-Socratic philosopher Xenophanes put it,

if cattle and horses and lions had hands
or could paint with their hands and create works such as men do,
horses like horses and cattle like cattle
also would depict the gods' shapes and make their bodies
of such a sort as the form they themselves have.

DERAILING THE RECOVERY. Cuts to programs like unemployment and COBRA would add to the current misery without helping the economy.

FELICITY. Happiness may come with age, but there's more to the story.

HEALTH CARE REFORM. According to the latest polling, most Americans want to give the new law a chance.