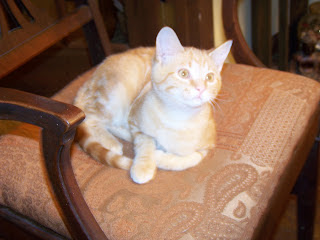 GOAT ROPE FARM-- Wu, orange kitten and all-round athletic supporter, has denied rumors that he has been tapped to coach football at WVU in the wake of the departure of Rich Rodriguez.

Wu did not return phone calls, although he issued a statement through his publicist that he is "more interested in chasing balls around than in telling other people how to do it."

"Unto my Books—so good to turn—
Far ends of tired Days..."-- Emily Dickinson

One way of wrapping up the year is to look back on the year's reading. Here are some of El Cabrero's greatest hits of 2007 (meaning books read but probably not written then).

CLASSICS. I was in a Greco-Roman mood this year and spent an inordinate amount of reading time plowing through quaint and curious volumes of forgotten lore. For reasons that now escape me, I revisited Herodotus' Histories and Thucydides' Peloponnesian War, some of Plutarch's Greek and Roman Lives, the Oresteia of Aeschylus,and topped it off with Suetonius' Twelve Caesars. I wanted to write here about Suetonius, but the sexual habits of the Caesars seemed a bit out there for a family blog.

POETRY didn't get as much attention as I would have liked, but I did give Billy Collins' Nine Horses and Sailing Alone Around the Room a go.

FICTION. For some reason, I thought I might be a better person if I went back to Brothers Karamazov, but that didn't seem to happen as far as I can tell. A Separate Peace was good. I know most people read that one in jr. high or high school, but I didn't get the memo. Cooper's Last of the Mohicans was kind of fun. And to clear the palate, I gave Kenzaburo Oe's Teach Us to Outgrow Our Madness a go (thanks SS and sorry it took me 9 years to finally read it). This was about my fourth time through Heart of Darkness, but I think I finally got it.

PHILOSOPHY. What can I say? It was a Nietzsche year (but then aren't they all?). I hit Beyond Good and Evil and The Genealogy of Morals. This year I had to finally go out and get my own copy of Birth of Tragedy. The Wagner parts are kind of loopy but I like the talk about Apollo and Dionysus and art redeeming life and making it bearable. El Cabrero leans to the Apollonian in most things except liquid refreshments.

BIOGRAPHY. Craig Nelson's Thomas Paine: Enlightenment, Revolution, and the Birth of Modern Nations was one of this year's best. Antony Everitt's Augustus wasn't bad either. Another good one was Walter Isaacson's Einstein, although I zoned out on the physics parts.

About 10 of the above were in audio. If you have any favorites, I'm all ears.

PROSPERITY "THEOLOGY" of the give-us-lots-of-money-and-God-will-make-you-rich variety is coming under greater scrutiny.

RETIREMENT WOES. Retirement security--or the lack thereof--is a huge and growing issue. Here are some possible solutions from the Economic Policy Institute.

HOW TO GET MORE READING DONE

During the fairly slack week between Christmas and New Year's, El Cabrero has decided to reveal some trade secrets. I've run across several people recently who say they'd like to read more books. And, since this is New Year's resolution time for many people, that might be a goal for some in the coming year.

I have stumbled upon a method that allows me to go through quite a few books. (Note: I can't reveal how many lest my employers realize what a slacker I am.) My method involves two strategies, one hard and one easy.

First the hard one: try to get up early enough to spend 45 minutes to an hour reading. I usually have a pile of about five going at any one time on different enough subjects to keep them separate. I try to turn the page of each one twice, then move on to the next one. Then, when you get close to the end of one, concentrate on finishing it.

Then there's the easy way: listen up! Many public libraries have good collections of recorded books on CDs, audio tapes, or even these new little recorded book thingies, the exact name of which eludes me at the moment. Even though I live kind of out there, there are three public libraries with decent collections of unabridged books within an hour's travel and I am usually abusing borrowing privileges of at least two of them at any given time.

Here are some advantages of listening. First, some books, particularly the classics, were originally meant to be heard. That's especially true for things like The Iliad and the Odyssey. And how long has it been since someone read aloud to you anything you wanted to hear?

Historical note: the idea of an individual reading silently to him- or herself is an innovation of recent centuries. Traditionally, books were read aloud to more than one person.

Then there's the boredom factor. There are some books I'd probably never get through in print version. But if I'm out jogging for an hour, it ain't like I can switch channels. I have found that one can run, drive, or mow one's way through almost any book.

THE DARK SIDE OF MICRO LENDING. Micro-lending is often held up as a panacea for solving world poverty. However, a recent article from Business Week shows the dark side as many for-profit institutions charge outrageous interest to poor people in developing countries where there is little regulation.

In Mexico, it charges interest rates that might set off popular and political revolts back home, although Wal-Mart describes its terms as appropriate to the Mexican market. At one store west of Mexico City, a 32-inch LG plasma TV with a price tag of $957 can ultimately cost as much as $1,474, thanks to a 52-week payment plan that carries an annual percentage rate (APR) of 86%.

DARK AS A DUNGEON. Here's an item from the Boston Globe about how conflicts over mountaintop removal mining are raging in West Virginia.

THE BEETLES. The British scientist J.B.S. Haldane supposedly said that the Creator, if he exists, has "an inordinate fondness for beetles." Here's an item on why they have done so well. 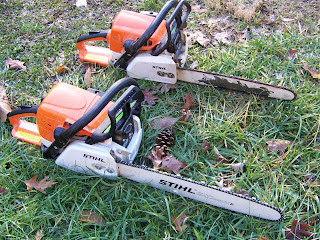 Caption: That's what I'm talking about.

El Cabrero was prepared to write a scathing critique of the commercialism and materialism of the Christmas holiday and how sad it is that we seek fulfillment in the accumulation of toys and gadgets--but I've been forced to cancel previously scheduled blogging to make the following urgent announcement:

Me got BIG chainsaw for Christmas! Yeah, man...

It was from La Cabra.

I had a little one before but this one puts the power in power tool. I feel much better about myself as a person as a result.

But it's not all Freudian symbolism. I live far enough out in the sticks where a chainsaw is a basic accessory to transportation and sometimes a necessary precondition thereto. Then there's the whole wood stove thing, which is a plus this time of year, not to mention any number of other activities which Marx referred to under the rubric "the idiocy of rural life."

But you know, in fairness to President Bush, who has been criticized here with something like clockwork regularity, there's something to be said for spending a weekend every now and then cutting brush at the ranch.

But this Christmas wasn't all about materialism. There was also time for infantile humor. La Cabra and I attended services at a local Episcopal church where we were delighted to hear no less than two hymns sung that included the word "ass." That was awesome.

Oh yeah, then there was family stuff.

All in all, it wasn't a bad Christmas. I hope yours was OK too.

SPEAKING OF CHRISTMAS, here's the latest edition of Jim Lewis' Notes From Under the Fig Tree, which includes reflections about the same as well as a new word for our vocabularies: pronoia. Check it out.

ANIMAL STEROID SCANDAL. It's not just baseball players--this NY Times article shows that birds and bugs are using chemicals to enhance performance too:

Frown though we may on steroid-style supplementation as cheating, or as competitiveness taken to unsporting and unnatural extremes, in nature such pious niceties do not apply. In nature, as the saying has it, it’s not whether you win or lose, it’s whether you win — and animals will do or ingest the most outrageous, dangerous, blechy things in their quest for victory.

Egyptian vultures consume large amounts of cow and goat dung to extract traces of plant pigments that will turn the birds’ pasty faces a sexually alluring shade of mustard. A male goat will demonstrate his ardor for a nanny by drinking her urine and soaking his beard and belly in his own. Hedgehogs, according to the new “Book of Animal Ignorance,” will gnaw on the skin of poisonous toads to incorporate the amphibian toxin into its saliva, which it spits up and down its spiny frame until it is virtually immune to predation. Hedgehogs are so eager to coat themselves in foul chemicals, it seems, that they’ve been known to start salivating and self-anointing at the merest whiff of odiferous items like cigar butts, furniture polish, boiled fish and, I’m sorry to report, coffee beans.

Why don't they just get a BIG chainsaw?

EDUCATION, INCOME, EARNINGS AND WHAT TO DO ABOUT IT. Here's my suggestion as presented in a Gazette-Mail op-ed this past Sunday. 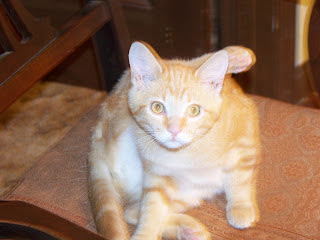 Caption: Wu, the newest addition to the Goat Rope Farm menagerie, joins with the rest (with the possible exception of the goats) in wishing all a Merry Christmas. He's already trying to get a leg up on the New Year.

By way of a Christmas Greeting, here's a little selection from Act I, Scene i of Hamlet as spoken by Marcellus:

Some say that ever 'gainst that season
comes
Wherein our Saviour's birth is celebrated,
This bird of dawning singeth all night long.
And then they say no spirit dare stir
abroad,
The nights are wholesome, then no planets
strike,
No fairy takes, nor witch hath power to charm,
So Hallowed, and so gracious, is that time.

Here's hoping that holds up this holiday season.