The calendar of wonks

You may have missed it, but yesterday was something of a major holiday amongst policy wonks such as myself. I am referring to what is called "Poverty Day," when the US Census releases data on poverty, incomes, and the uninsured for the previous year.

As you might expect for the worst year of the worst recession since the Great Depression, things were pretty bad out there. Here's part of a statement by Robert Greenstein of the Center on Budget and Policy Priorities:

The number of uninsured Americans climbed to over 50 million in 2009. That's something to think about as politicians on the right dream of undoing this year's steps toward covering all Americans. Greenstein notes that

the increase in the ranks of the uninsured would have been substantially greater if not for Medicaid and CHIP, which covered more people as the number of people lacking employer-based insurance swelled. These findings underscore the relevance of the recently enacted health reform law, which substantially expands coverage for people who cannot obtain insurance through an employer. Had health reform been in place in 2009, the number of people without health insurance would have risen far less.

Things aren't all that great in El Cabrero's beloved state of West Virginia, as the WV Center on Budget and Policy reports, although they haven't been as bad as might be expected based on previous recessions.

NOTE: Goat Rope missed a rare day of posting due to some of those curve balls that life ha a way of throwing.

Shortly after Charles Darwin published The Origin of Species, he wrote to a scientific friend that

I have received in a Manchester newspaper rather a good squib, showing that I have proved might is right and therefore that Napoleon is right, and every cheating tradesman is right.

That unknown Manchester journalist may have been one of the first--but far from the last--to make some kind of leap from the fact of evolution to the idea that this makes something right. From then on partisans of the privileged and powerful seized on evolution to "prove" that cutthroat capitalism was a law of human nature.

This kind of leap from an "is" to an "ought" is a fallacy pointed out as early as 1739 by the Scottish philosopher David Hume. One way this shows up in popular culture is the conflation of the idea of "nature" or things that are natural with that of "goodness." One doesn't have to turn over too many rocks, however, to find quite a few things in nature that seem downright nasty to most people. At the ancient sage Lao Tzu put it, "Heaven and earth are not humane."

Evolution by means of natural selection, then, isn't good or right. It just is. People have to decide questions of value form themselves.

THE CLOCK IS TICKING on a program credited with creating 240,000 jobs in the recession. The Emergency TANF program, part of the Recovery Act, will expire at the end of the month unless it is reauthorized. This item highlights efforts in the Senate to keep it going. If you haven't done your good deed for the day, getting in touch with your senators' offices on this would fit the bill.

John Locke, an influential British philosopher of the 17th century, believed that all knowledge comes from experience and that the human mind was a "tabula rasa" or blank slate.

Every so often, I've been blogging about the possible connections between human evolution and social life, an area often fraught with controversy and misconceptions. For years, I was biased towards the view that social conditioning and environmental factors were the decisive force shaping what is frequently called human nature.

Plus, when I was young, I was attracted to the philosophy of existentialism, which in some forms emphasized human freedom to choose. As Jean Paul Sartre put it, we were (supposedly) "condemned to be free." I still have a soft spot for those views and don't think they are entirely wrong, but the tide of science has been pulling the other way.

I'd like to give a shout out to two books, one big and one little, that deal with this subject in interesting ways. The big one is Steven Pinker's The Blank Slate: The Modern Denial of Human Nature and the little on is Peter Singer's A Darwinian Left: Politics, Evolution and Cooperation.

Pinker takes aim at three cherished myths: the idea that humans are silly putty totally moulded by social influences; the idea of the "ghost in the machine," i.e. that the mind is somehow independent of the brain; and the idea of the Noble Savage, which idealizes people in an imaginary "state of nature."

Singer argues that while we do carry evolutionary baggage that makes a peaceful egalitarian utopia a bit problematic, this doesn't mean we can't successfully work for a more just and fair society.

DYING TO WORK. Jim Hightower takes aim at death on the job.

TAX THIS. House minority leader John Boehner made headlines this weekend when he said he might accept letting Bush era tax cuts for the wealthy expire as a compromise if cuts for the middle class were preserved, something no one else in his party seems prepared to do. A recent Gallup poll found strong support for ending tax cuts for the wealthiest Americans.

HERE'S SOMETHING ELSE for the coal industry to deny. A new study of the health effects of coal-fired power plants found West Virginia to be the hardest hit state in the country, as the WV News Service reports. Here's another article on the topic and here's a link to the full report.

IDENTIFIABLE VICTIM BIAS. A study of jury verdicts found that penalties for damages go down when the number of victims go up. It seems that people are more likely to impose severe penalties when the injured party is someone concrete rather than a bunch of unknown people. This reminds me of a characteristically evil remark attributed to Stalin that when one person dies it's a tragedy but when a million die it's a statistic. 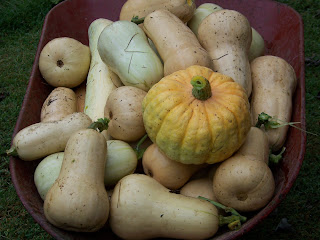 Gardening provides its own way of marking the passage of time. Ours began on Christmas Day when the garlic was planted, along with a healthy cover of old hay and goat manure. Before and after that, we'd cover the garden-to-be with fallen leaves and more donations from the goat barn.

When the weather got warmer, we borrowed the neighbor's tiller several times to work the soil. As spring approached, we planted lettuce, spinach, arugula and radishes in a cold frame. By the time the weather was warm, we had a good haul of those early bloomers on the way as we planned and planted the rest.

By the time summer was in full force, tomatoes came in like crazy, followed by eggplants and peppers. (We have bad bean and corn karma for some reason.) One mark of the end of summer is the maturing of squashes. We got a pretty good haul this year. A few Georgia candy roasters are still straggling in but the garden is pretty much on automatic pilot from here on out. We're still holding out hope for some figs, which aren't altogether crazy about the West Virginia climate. Somewhere in the midst of it all are few buried potato plants.

Much of what hasn't been eaten already is canned or otherwise put away. It won't be long until we pull it all out and start again piling on the compost again.

I HIGHLY RECOMMEND THIS item on the triumph of unreason.

THE GRASS MAY BE GREENER over there.

CLIMATE CHANGE. Would you get on a plane that had a 10 percent chance of crashing? Probably not. With climate change, the certainty of major changes, mostly nasty, is closer to 90 percent.

THIS IS GROSS but interesting.