Climbing up the Cold Mountain 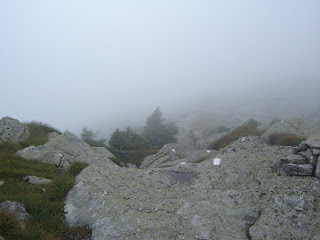 Clambering up the Cold Mountain path,

The Cold Mountain trail goes on and on:

The long gorge choked with scree and boulders,

The wide creek, the mist-blurred grass.

The moss is slippery, though there's been no rain

The pine sings, but there's no wind.

Who can leap the world's ties

And sit with me among the white clouds?--

HanShan, legendary Chinese poet said to have lived in the Tang Dynasty (618-907). Translation by Gary Snyder

A word from the wise 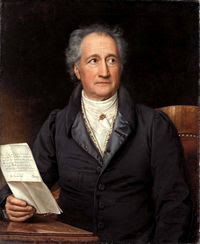 "One ought, every day at least, to hear a little song, read a good poem, see a fine picture, and, if it were possible, to speak a few reasonable words."--Johann Wolfgang von Goethe 1749-1832

I don't know about y'all but plenty of days go by when I can't say that.

STATE OF THE STATES. In this op-ed, Paul Krugman warns that states that slash spending in the recession could wind up making things worse.

SAVING FACE. A new study suggests that facial expressions are innate, not learned.

CLONED PETS, ANYONE? Some people are saying yes.

A New Year in search of a resolution 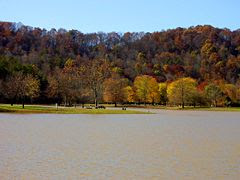 Beech Fork Lake, home of a local triathlon. Half a mile of swimming, uphill both ways. Image courtesy of wikipedia.

First of all, a happy New Year to one and all. Here's hoping 2009 ends better than it started.

For the last few days, El Cabrero has been blogging about the old year's reading. It so happened that the last book of the year was a recorded version of The Know-It-All: One Man's Humble Quest to Become the Smartest Person in the World by A.J. Jacobs. It was a diverting true story of a man who resolved to read the entire Encyclopaedia Britannica and finished it in slightly less than one year.

I was impressed and have to admit being drawn to trying things like that, but I'll probably pass on that one as a New Year's resolution.

I was blissfully resolution-free for 2009 until the phone rang yesterday. It was my daughter, La Cabrita, with another brilliant idea. She's the same one who bugged me until I took her to see the ball drop in Times Square 10 years ago when she was a teenager. It was a big memory for her, but I mostly recall standing boxed in a crowd of strangers for hours in the cold and not being able to find a bathroom...

"Do you remember that triathlon thing you did a while back?," she asked. I knew the conversation would be down hill from there.

"Yeahhh....," I said cautiously. I was already getting a bad feeling about the call.

I'm not sure where her sudden burst of jockiness came from lately. First karate and now this. I tried to explain how hard it would be and how much training would be involved, especially for aquatically challenged people such as ourselves, but she was not deterred. Between her type I diabetes and my dead heart and blown knee this has all the signs of Really Stupid Idea.

My advice for you, Gentle Reader: be careful about answering the phone today.

Imaginitive drawing of the long since destroyed temple of Zeus at Olympia. Image courtesy of wikipedia.

El Cabrero has been so busy slacking and blogging about books for the last several days that current events and snarky comments about the same have been sadly neglected.

One more book for the road though: Tom Stone's Zeus: A Journey Through Greece in the Footsteps of a God was a lot of fun. I'm a big fan of the Hairy Thunderer and the whole Olympian family and this book scratched that itch.

(It's a bit ironic that many people have seen some kind of moral progress in the triumph of monotheistic religions over polytheism. At times I must admit that the evidence for this seems underwhelming...)

Anyhow, aside from the usual news fare of carnage and collapse, here are some items that caught my eye in the last week or so:

RECORD FINE FOR MINE FATALITY. From the Dec. 24 Charleston Gazette, Aracoma Coal Co., a subsidiary of Massey Energy, admitted criminal safety violations in a fire in which two miners, Don Bragg and Ellery Hatfield, died in 2006. The company pleaded guilty to 10 criminal charges, including one felony. The company must pay a record $2.5 million in criminal fines and an additional $1.7 million in civil fines.

WAL-MART COUGHS IT UP FOR WORKERS' UNPAID WAGES. Far be it from me to take joy in the misfortunes of others, but this is freakin' awesome!

SIGNS OF THE TIMES, PART ONE. Last week, an AP story reported that a growing number of Americans have been giving up their cats and dogs as the economy tanks. Yesterday's Gazette reported that both pets and farm animals have been abandoned at an increasing rate in West Virginia.

SIGNS OF THE TIMES, PART TWO. On a little less grim note, more people are using repair shops to fix old items rather than buy new ones as money gets tighter.

One thing that struck me on a trip to Mexico last summer was the vast number of businesses there that fix up all the things that people here just throw away. It was another reminder of how wasteful we are.

DEMOGRAPHIC ODDITY. At a time when adults in industrialized countries have grown taller, the average height of African-American women has been declining, beginning with those born in the 1960s. The effect is most pronounced in women with low and median incomes, while those with higher incomes have actually grown taller.

The Greek word "atheoi" from a manuscript of a New Testament epistle. It's best translated as "the godless." Image courtesy of wikipedia.

During Slacker Week, El Cabrero is reviewing last year's reading material. And no discussion of that would be complete without mentioning some recent books attacking religion.

For the record, El Cabrero is a fairly religious person, although I probably won't make Eagle Scout. Still, given all the mischief and worse unleashed on the world in the name of religion, I don't begrudge those who give it an occasional whack.

Thanks to local public libraries, I was able to listen to two such books on CD. Ironically, both times I was driving some distance to attend one or another religious function. There has been a spate of atheist books of late but the two I spent time with were The God Delusion by British scientist Richard Dawkins of "selfish gene" fame and God is Not Great: How Religion Poisons Everything by Christopher Hitchens.

Both were lively and entertaining, although I found Dawkins to be the more persuasive of the two, not that I was won over. That would be too much of a leap of faith for me.

And in all fairness, I don't think it's fair to say that religion is responsible for all the evil in the world--I'd say it's closer to 70 or 80 percent. Besides, people use whatever material is at hand to justify their nasty deeds, religious or otherwise (although religion does work pretty well in that department).

During this week of slacking, El Cabrero has been reviewing items from the last year's worth of reading material.

Today's selection involves Weird and Obscure Works that I Wouldn't Necessarily Recommend to Anyone Else. To wit, sometimes I go on extended reading jags about extremely arcane subjects. Good though. Here goes...

*Homo Necans: the Anthropology of Ancient Greek Sacrificial Ritual and Myth, Walter Burkert. I told you these were obscure books. This one is about the role of hunting and later animal sacrifice in human culture, with a special focus on the Greeks.

*Violence and the Sacred, Rene Girard. This was my second time through that book, although the reasons for reading it again escape me at the moment. If I got it right, and I'm not saying I did, Girard views acts of violent scapegoating as key to maintaining the social order in early societies.

*Miasma: Pollution and Purification in Early Greek Religion, Robert Parker. What can I say? It's a weird reading jag thing. I'm intrigued by the ancient Greek idea of miasma or pollution as a way of understanding contemporary violence. Short version of my theory: violence is kind of like a barrel of hazardous materials that gets dumped in some public place. Once it's out there, it's unpredictable and can pollute people far removed from the original act.

*The Goddess Fortuna in Medieval Literature, Howard Rollin Patch. Again, what can I say? She lives.

Disclaimer: El Cabrero and the staff of Goat Rope assume no responsibility for those who actually try to read these things.
NO LINKS TODAY. I'm too busy slacking to deal with current events.