I remember a morning 10 years ago when the weather was beautiful. It was on the cusp of the change of seasons, when the onslaughts of August had been beaten back but the chill winds of Autumn hadn't yet begun to blow.

I was sorting through different details and trying to figure out a week's hectic schedule when I made a phone call to a friend who broke the news of major destruction in New York, Washington and Pennsylvania.

I looked out the window to a field where a neighbor kept donkeys who were playing in the sun and rolling in the grass. I was struck by the contrast between that idyllic rural scene and the death and devastation that had just happened. And I wondered about what was to come.

There's been a lot of water under that bridge since then and a lot of twists and turns--many of them wrong turns. It's always tempting to wonder what if this or that had gone down differently, if different choices would have been made in the wake of the attacks. Or how different things might have been if they would have been foiled. Too bad that history doesn't give us the chance to rewind and try again.
You can't unring a bell, as Dylan sang. But you can control which bells to ring or leave unringed as we move ahead.
by El Cabrero 1 comment:

President Obama's jobs speech last night laid out a vision for giving a boost to a fragile recovery. Here are some reactions from the Center for American Progress, the Economic Policy Institute, the Campaign for America's Future and the Center for Economic and Policy Research.

My short take is that, while the proposed American Jobs Act is not perfect (I'd prefer less in tax breaks and more in direct job creation), it is a step in the right direction.
by El Cabrero No comments:

I guess he wasn't just happy to be there 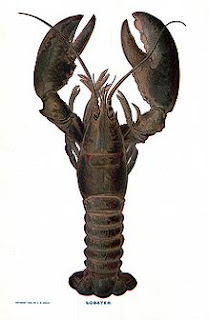 El Cabrero scrupulously combs the web daily in order to come up with hard hitting relevant information for you, Gentle Reader. Today I hit the jackpot.

According to this AP article, a gentleman from D'Iberville Mississippi was arrested at a grocery store after leaving the store with several items in his shorts which were unpaid for, including two bags of jumbo shrimp and a pork loin.

That in itself isn't particularly noteworthy. However, also included amongst these in-shorted items (I just made that word up) were two live lobsters.

Now, I'm no legal scholar but it seems to me that the shoplifting charge should not include the lobsters. There should be some kind of general understanding that would prevent people who put live lobsters with intact claws in their undergarments from being charged with a criminal offense. Rather, it should be assumed in such cases that such people had a pretty compelling reason to do so.

WHAT HE SAID. Here's Nobel laureate Joseph Stiglitz on what it would take to put Americans back to work.

SPEAKING OF WORK, here's a look at green jobs in the coalfields from Ken Ward at Coal Tattoo. Short version: there are some, but there could be lots more.

JOBS OR AUSTERITY? In times like these, you can't have both. 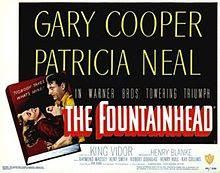 Earlier this summer, as an exercise is spiritual self-mortification, I waded through Ayn Rand's The Fountainhead. Regular readers might recall earlier disrespectful posts in the subject.

It so happened about the time I was done with the book that a friend, who happens to be a Jesuit priest, told me I should check out the film version. I figured, why not? After on, once one has wallowed in a manure pit there is no reason to go out of one's way to avoid stepping in some.

Then I got downright curious about the movie version. The novel, such as it is, stretches on for hundreds and hundreds of pages. How could someone get it into a movie?

It turned out that the 1949 film version was written by Rand herself. And, to give the devil her due, I must say she really did it. For all the inevitable differences between a book and a movie, she got the feel of it...which is to say the film is every bit as comically wretched as the novel.

Gary Cooper stars as the architect Roark. He was a lot cooler in Sargent York. He just looks kind of silly over two hours of posturing and swaggering. And poor Patricia Neal, who played Dominique Fancon. She just kind of darts around the screen like some odd tropical fish in an aquarium.

Roark's buildings are apparently intended to strike the viewer with their originality, although in retrospect they are kind of comic versions of the kinds of architectural monstrosities we've gotten used to over the last half century.

One final thought: Rand in both the book and film continually slams ancient, medieval and Renaissance architecture in favor of modern boxes. After tooling around Italy for a week this summer and viewing all kinds of the old stuff, I'll take it any day of the week.

A BLOG OF NOTE. Here's a link to the Economic Policy Institute's new blog.

WORK SHARING. Dean Baker argues that it should be part of President Obama's jobs program. 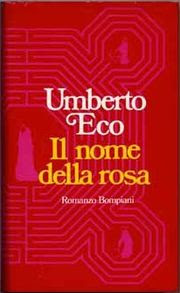 It is a sad fact of social and political life that people often suffer outrageous oppression or exploitation from the very powerful but end up taking their frustrations out on some powerless group that is easy to scapegoat.

I've been in a medieval mood since visiting Italy this summer and one book on my current pile is Umberto Eco's novel The Name of the Rose. There's a great illustration of the above point in that novel when the young monk Adso converses with the whacked out Salvatore, who resides at the monastery where the action takes place.

Salvatore grew up in extreme poverty and was swept up in radical and heretical movements. Although the "horde of shepherds and humble folk" he joined dreamed of bringing down the overlords, they mostly wound up massacring defenseless Jews instead. Adso then asks why the Jews were attacked when their main oppressors were greedy lords and bishops. To quote from the book,

He replied that when your true enemies are too strong, you have to choose weaker enemies. I reflected that this is why the simple are so called. Only the powerful always know with great clarity who their true enemies are.

Gee whiz, it's a good thing that nothing like that can happen any more, huh?

A MODEST PROPOSAL. Here's a suggestion that this country needs some good jobs.

POLITICS TODAY is getting pretty weird. On all sides.

STAY COOL. Fiddler crabs chill out with their big claws.

We interrupt Goat Rope's regularly scheduled programming due to a major news development reported this weekend on NPR which has forced El Cabrero to remake his cognitive map of the world.

According to someone who should probably know,

"Alligator wrestling is not a thinking man's sport."

And to think that all these years I was convinced you had to be really good at math to do it...

One other point to ponder about that statement...it was made to people who paid $100 to learn how to wrestle alligators. Could there be some intended or unintended irony or something there?

TWO FROM LABOR. Here are two good Labor Day op-eds from the Charleston Gazette. The first is by Teamster leader Ken Hall and the second by state AFLCIO secretary treasurer Larry Matheney.

SPEAKING OF WORKERS, a new report (the easiest part of which was written by yours truly) looks at the state of working West Virginians. Here's a link to press coverage from the Gazette and the West Virginia News Service and here's a link to the report itself.