My Facebook friends know I finished the Camino de Santiago yesterday. It was 799 kilometers or 480 miles over 30 days.

During that time I set some pretty strict rules for myself, like not reading or listening to audiobooks or music, which is a big deal for me.

It was kind of a Zen thing. When walking, just walk.

Conversation was ok, but mostly it was the sounds of boots and trekking poles along with those of nature and some traffic.

Today, starting the Camino de Finisterre to the Atlantic , I decided to break that fast with Bob Dylan, who provides the soundtrack of my life.

Still, hearing Bob was like rain on dry ground. I listened to the collection on Biograph. So many songs hit home, but the one that hit the hardest was Every Grain of Sand.
Sample quote:

“Then onward in my journey I come to understand that every hair is numbered, like every grain of sand.”

Let’s just say Bob got me up some serious hills today.

(Note: I just lost a much cooler version of this post.)
by El Cabrero No comments: 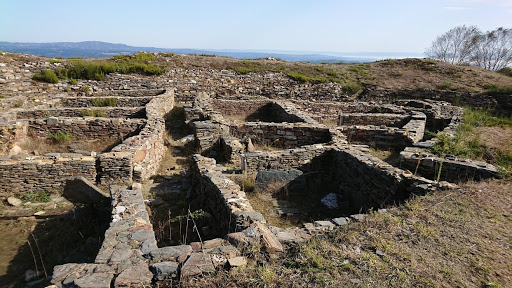 There is sometimes a fine line between concentration and tunnel vision and I crossed it the other day on the Camino.

Not in a good way.

The walk between Portomarin and Palas de Rei was up and up and up.

As I may have mentioned, I am not a fan of walking up big ass hills/mountains with a pack. Or without.

Not in a boat. Not with a goat (although I do miss our goats back in WV...ish).

The path took another major upward turn near Castromaior. I got so caught up in just dragging myself up that I completely missed out on some ancient Ibero-Celtic (Spanish proto-hillbilly) ruins dating back to the 4th or 5th century BC, when the Romans began to occupy the area.

These are known as artifacts of the Castro culture, the Latin term castrum being the source of our word castle. They were basically hill fortresses and villages.

Luckily a Camino friend got some pictures. I’m still kicking myself in the rear for missing it.

As the saying goes, you snooze you lose.


Pulpo or octopus is considered a delicacy in much of Spain, especially near saltwater. I have always considered octopi to be magical creatures in an underwater but outer space kind of way.

The thought of eating one has always seemed gross to me. I’ve been giving octopus eating people hell on the Camino.

Today early on we passed by a pulperia, a store/restaurant specializing in octopus. A woman was giving away tiny slices.

It was clear that this particular octopus was beyond my ability to help. And I knew I’d never actually order     one. But, in the spirit of Green Eggs and Ham I decided to try.

And, yes there was some prompting from the peanut gallery.

I took a sample and tried to eat it..,for a nanosecond.

I tried to smile at the woman and bow in thanks—then I ran for the nearest trash can.
It tasted like That. Which. Should. Never. Be. Consumed. By. Humans.

I need some beans and cornbread. Fast.
by El Cabrero 2 comments:

In the Middle Ages, the legend goes that a pilgrim on the way to Santiago was about to die of thirst near Zariquiegui. The devil then appeared and offered to give him water in exchange for his soul.

He refused and at the last moment Santiago—Saint James—appeared and quenched his thirst from a scallop shell.

(As an observant Jew, the real James probably never had much to do with scallops or other shellfish, but let’s not be too literal here.)

I nearly re-enacted that scene at the same place on day 3 of my pilgrimage, minus the supernatural parts.

I was trying to make up time for what I thought was a slow start. It was a long hot slog through Pamplona but I wanted to go farther.

I thought I had enough water, but the path was long, hot and dry. Every time I thought I was getting closer to the village, it seemed to recede like the horizon.

It was dry and I had a sleeping bag and trail mix, but without water none of that mattered.
By the time I “came in through the wilderness, a creature void of form” (Dylan), I was pretty close to being in serious trouble.

Sad to say I made the same mistake three days later from just being lazy about taking off my backpack/torture devise to refill one hot afternoon. Shame on me.

Since then I’ve learned my lesson. Each day, water is the top priority in the morning.

I don’t want to reach the point of the pilgrim in the legend. I’m not sure I trust Santiago that much. Or myself.
by El Cabrero No comments: