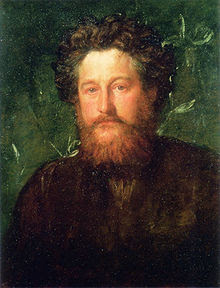 "Yea, I have looked, and seen November there;
The changeless seal of change it seemed to be,
Fair death of things that, living once, were fair;
Bright sign of loneliness too great for me,
Strange image of the dread eternity,
In whose void patience how can these have part,
These outstretched feverish hands, this restless heart?"--William Morris
by El Cabrero No comments:

Nugget for the day 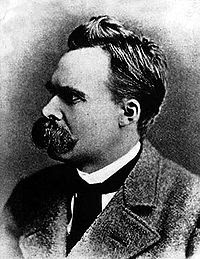 "Man, the bravest animal and the one most inured to suffering, does not repudiate suffering in itself; he wills it, he even seeks it out, provided that he is shown a meaning for it, a purpose of suffering."--Friedrich Nietzsche
by El Cabrero No comments: 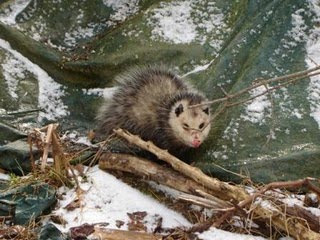 It's Thanksgiving and that means one thing here at Goat Rope. It's time for the annual Thanksgiving possum recipe.

(It goes without saying that first one must acquire a possum, which may well not be available in the specialty section of your local grocery store.)

I found the following recipe for Allegheny Roast 'Possum at a website called ushotstuff.com:

Stuff with Apple-Raisin Stuffing, and truss. Dust with salt and
pepper; put on a roaster rack. Roast at 325 degrees for 1 hour to 1
1/2 hours (30 to 35 minutes per pound). For the last 30 minutes, put
peeled and parboiled sweet potatoes around the meat. Dust meat
with brown sugar mixed with 1/4 to 1/3 cup flour. Baste with
juices 3 times during the last 30 minutes.

On the bright side...

In yesterday's post, I speculated darkly on whether modern civilization is heading towards some kind of major downturn due to inaction on climate change and such. Since this is Thanksgiving week and all, I thought it only fitting to give a shout out to a look at the bright side of disasters.

Recently a friend loaned me a copy of A Paradise Built in Hell: The Extraordinary Communities that Arise in Disasters by Rebecca Solnit. The author makes the interesting argument that sometimes when disasters happen, people respond with the courage, compassion, generosity, mutual aid and solidarity all too rarely seen in ordinary life.

I've noticed something like that in less drastic interruptions of ordinary life, such as major snowstorms, power outages and floods. As unpleasant as such things can be, people often come together in amazing ways and can have a good time doing it.

So even if things get bad, which I hope they won't, it might not be all bad all the time. I guess we can be thankful for that.

NOTE: I'm off this week. Posts will appear as usual but without the links and comments.
by El Cabrero No comments:

Cutting down trees on Easter Island 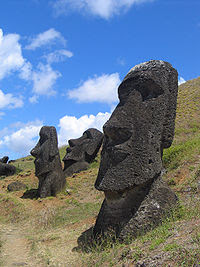 A while back, I listened to an unabridged recording of Jared Diamond's Collapse: How Societies Choose to Succeed or Fail. It gave me a bit of a "Holy ****!" moment. For most of my adult life, I've tended to be more keyed in to fights over economic justice and policy and haven't been as attentive to environmental issues and particularly climate change.

Lately, I've gone back to Collapse in the print version and have been making my way through it. And sometimes I wonder whether we aren't headed towards a major climate catastrophe.

Such a fate is far from inevitable, given the political will. Alas, political will is the one thing that has been in short supply up to now and will probably be in even shorter supply for the next few years. And West Virgina, where the coal industry is a jealous idol, is ground zero of climate change denial.

Diamond gives examples of several societies that have undergone some kind of breakdown when the over-stressed local environments or faced other setbacks. The most compelling to me is that of Easter Island. I guess I'm not the only one. As Diamond put it,

The Easter Islanders’ isolation probably also explains why I have found that their collapse, more than the collapse of any other pre-industrial society, haunts my readers and students. The parallels between Easter Island and the whole modern world are chillingly obvious. Thanks to globalization, international trade, jet planes, and the Internet, all countries on Earth today share resources and affect each other, just as did Easter’s dozen clans. Polynesian Easter Island was as isolated in the Pacific Ocean as the Earth is today in space. When the Easter Islanders got into difficulties, there was nowhere to which they could flee, nor to which they could turn to help; nor shall we modern Earthlings have recourse elsewhere if our troubles increase. Those are the reasons why people see the collapse of Easter Island society as a metaphor, a worst-case scenario, for what may lie ahead for us in our own future.

NOTE: I'm taking this week off so there will be no links and comments until next week. Party on!
by El Cabrero No comments:

I was at a conference recently when someone was talking about what it takes to make a difference in the movement towards social and environmental justice. They quoted someone who said something like it takes "constant pressure, constantly applied."

I appreciate the sentiment but don't quite agree with the formulation. It seems to imply that these kinds of things take place at a steady pace. It seems to me that life, history and evolution move sporadically in fits and starts--and so do struggles for social justice. A lot of them in my experience involve a lot of waiting and then sudden focused action.

Respectfully, I'd put it this way. It takes constant alertness and punctuated focused action when conditions are right.

Speaking of which, conditions are right for El Cabrero to take a few days off. Goat Rope will continue to appear most days, although without the links and comments. I have a road trip planned, not to mention an attempted rendezvous with certain four legged antlered creatures up on the hill.
by El Cabrero No comments: