Below are two charts that show where the money that could have paid teachers, school support personnel and public employees went. Hint: it didn't go to them. Really.

The business taxes were meant to "pay for themselves" and create jobs, neither of which happened. They were, however, enough to pay for a 12 percent raise for all public employees.

This isn't about fate. It's about choices and priorities. Stay strong! (Shoutout to Ted Boettner and West Virginia Center on Budget and Policy): 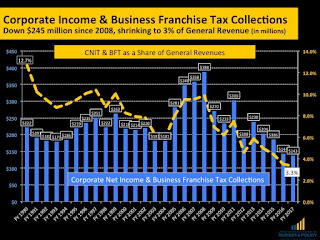 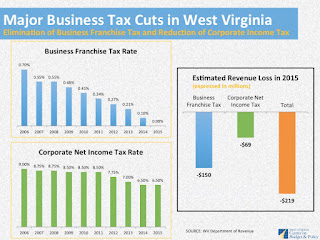 It's a little known fact that "Solidarity Forever," the international anthem of the labor movement,  was inspired by events in West Virginia. Ralph Chaplin, writer and long time rebel worker, lived for a time in the Mountain State and edited a labor paper in Huntington, one of several then published in the state.

While here, he was inspired by the solidarity of coal miners during long and bitter strikes that raged in Kanawha County in the Paint Creek and Cabin Creek areas around 1912-1913. It took him a while to finish the song, which is sung to the tune of the Battle Hymn of the Republic.

Today most people familiar with the song only know the chorus. In honor of West Virginia's teachers, service workers and public employees, here's the whole thing:

When the union's inspiration through the workers' blood shall run,
There can be no power greater anywhere beneath the sun;
Yet what force on earth is weaker than the feeble strength of one,
But the union makes us strong.

Is there aught we hold in common with the greedy parasite,
Who would lash us into serfdom and would crush us with his might?
Is there anything left to us but to organize and fight?
For the union makes us strong.

It is we who plowed the prairies; built the cities where they trade;
Dug the mines and built the workshops, endless miles of railroad laid;
Now we stand outcast and starving midst the wonders we have made;
But the union makes us strong.

All the world that's owned by idle drones is ours and ours alone.
We have laid the wide foundations; built it skyward stone by stone.
It is ours, not to slave in, but to master and to own.
While the union makes us strong.

They have taken untold millions that they never toiled to earn,
But without our brain and muscle not a single wheel can turn.
We can break their haughty power, gain our freedom when we learn
That the union makes us strong.

In our hands is placed a power greater than their hoarded gold,
Greater than the might of armies, magnified a thousand-fold.
We can bring to birth a new world from the ashes of the old
For the union makes us strong.

(Note: this song has shown up in this blog before, but it seem especially relevant today.)
by El Cabrero No comments:

The die is cast 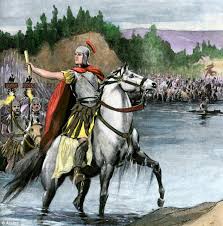 As a classics geek, I can't help but remember that when Julius Caesar crossed the Rubicon river on his way to Rome to take on the aristocratic party, he said "The die is cast."  Today, we might say "the dice have been rolled." Or just "It's on."

That seems to me to be where teachers and public employees are now unless there is positive action soon at the legislature, which doesn't seem likely.

That probably means that there will be a lot of voices, some from people we know and some that almost seem to  make sense, urging people to step back and/or give in before Thursday's action.

But it seems clear to me that the decision to act wasn't made lightly. People have been consulted statewide and votes have been taken. Waffling now would likely be seen as a sign of weakness.  What's needed now is a strong showing of strength and solidarity.

The die is cast. Or, if you prefer, it's on.
by El Cabrero No comments: