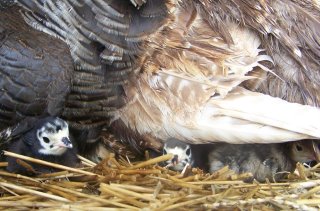 We are pleased to announce the arrival of 19 baby turkeys, more or less, to Goat Rope Farm. We say more or less because they are hard to count at the moment and some may yet hatch and some that have hatched may not make it. They are pretty cute at this point however.

The proud mothers are Josephine and Hortense, who seem to have adopted a cooperative childcare system. I don't think either one knows or cares whose is whose.

This lack of respect for individual property, inheritance and personal responsibility suggests that these females may be socialistic freedom haters.
by El Cabrero No comments: 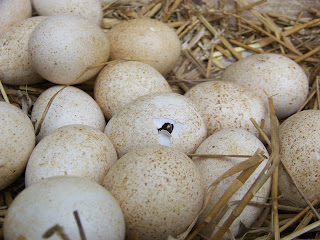 There's the old saying "Don't count your chickens before they're hatched." That applies to turkeys as well. At this point, however, it looks like at least some of the 20+ turkey eggs the two females have laid here are going to hatch. Several are in the pipping stage now and at least one little guy has pecked through the shell. This weekend should be showtime.
by El Cabrero No comments:

Of monkeys, people and religion 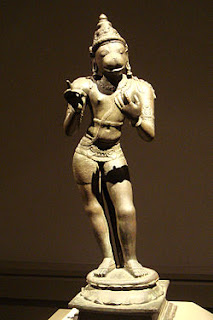 El Cabrero spent a good part of the week careening around West Virginia. For entertainment and edification, I listened to a recording of primatologist Frans De Waal's book The Age of Empathy: Nature's Lessons for a Kinder Society.

In it, he made an interesting point that never had occurred to me, i.e. that religions that developed in places where people lived in proximity to monkeys and/or apes didn't separate humans from the rest of the natural world. Presumably it would be harder to do so when there were little furry human look alikes running around.

Dude has a point. Compare and contrast Hinduism and Buddhism with Judaism, Christianity and Islam.

FRACK PICTURES to come next week.

POLITICS, GENES AND BRAINS discussed here. Comment: as interesting as books on that topic are, they don't explain why things are so polarized today.

GET OUT THERE AND JOG if you want to live longer.

Not much room in the inn

I am by no means the brightest crayon in the box--and if I ever come close to forgetting that, the Spousal Unit is usually right there to remind me. Another case in point occurred on an otherwise glorious road trip from one corner of WV to another to try to drum up support for creating a Future Fund for our state from taxes on natural resources.

The first stop on the journey was to the beautiful and blessed counties in the southeast, Greenbrier and Summers. Then back through Charleston, up through Parkersburg and along the mighty Ohio River to New Martinsville in Wetzel County.

I didn't bother to try to reserve a room, considering it to be a truth universally acknowledged that aside from graduation, homecoming, major football games and other high holy days of obligation, there is never a need to reserve a room in advance in any West Virginia town.

Fool that I was. I had forgotten that Wetzel County is ground zero for Marcellus Shale natural gas drilling. As in Fracks-R-Us. I hit town around 9 at night and every motel I could find was full--and the parking lots were full of trucks with out of state plates.

One of the sore points of the Marcellus boom is that most of the drilling and pipeline jobs go to people from out of state, who incidentally need a place to stay. I saw plates from Oklahoma, Kansas, Michigan, Texas and pretty much anywhere but here.

(I was driving a rental with NY plates, so I don't have a whole lot of room to talk on that point).

It started to look like I'd either have to go up to Wheeling or down to Parkersburg to crash when I decided to try one last place and got the last room available.

The most interesting part was a conversation with the hostess. She said they were full most every night, at least from Sunday to Thursday, with gas workers from all over. I asked whether they were a rowdy bunch and she said no. Most days they are up and out by 5 or 6 and sometimes don't get back till after dark. By 9, she said, it was pretty quiet. Duly noted.

I spent the next day seeing what gasland really looks like. Short answer: not terribly pretty. I'll hold off till I can upload some pictures but here's the punchline: we've seen lots of coal, oil and gas booms and busts in this state. More busts then booms, no anatomical reference intended. We need to do something different this time around to ensure that WV profits more from its natural wealth in the 21st century than it did in the 20th.

Much to say but alas no way to say it. El Cabrero is on an adventure to gasland but without wi-fi. Had I the agile thumbs of a generation born to text I might be able to pull it off with the Precious (iPhone). I reckon it'll keep.
by El Cabrero No comments:

I admit it. There are few things in the world that I love whacking more than the bull****... I mean ideology of Ayn Rand. By chance last week, I stumbled upon this article from the Parthenon, campus paper at my alma mater Marshall University, about the controversy still surrounding its acceptance a few years ago of a million or so dollars from the big bank BB&T to teach an economics class in Randian garbage.

I couldn't help but respond in the following letter to the editor:


I read with interest the Parthenon article discussing the controversy of Marshall’s acceptance of BB&T money to indoctrinate students in Ayn Rand’s “philosophy.”

There are any number of ironies here. First, Rand didn’t believe that places like Marshall should exist at all. In a 1964 Playboy interview, she stated that “My position is fully consistent. Not only the post office, but streets, roads, and above all, schools, should all be privately owned and privately run.” She also would have opposed the several kinds of publicly provided financial aid that Marshall students receive.

It also establishes a disturbing precedent. Suppose some other billionaire or corporation wants to plop down another million or two to establish a chair to advocate for, say, white supremacy or female circumcision or any other loopy ideology. Is money the only thing that matters? Should Marshall cave every time somebody waves some cash? If so, there’s a word for that and it isn’t education.


I wish I could have been a little nastier in the letter, but 20+ years of working for a Quaker organization kind of ruined me.

UNEMPLOYMENT, its costs and possible remedies are discussed here.

SITTING  is bad for your health.

WAY TO GO, BOB. Dylan is a winner of the presidential medal of freedom.