How to pick up (literal) chicks 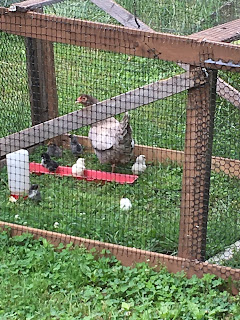 A great deal of time spent on the farm has to do with what I call animal politics, which is the intricate web of relationships between the (four legged or feathered) animals and between animals and humans.

One example is the Darwin game which we play with the indeterminate number of chickens. In this game, the humans want the eggs to eat them, while the hens hide them to reproduce. I'm not sure how much of that is conscious on either of our parts.

The latest winner of the Darwin game is a gray hen who laid her eggs in a niche in our garage. She sat on them long enough for them to be viable, which meant I couldn't use the punching bag in the garage for three weeks so as not to disturb her.

The eggs hatched night before last, which meant I had to get Mama-san and chicks into a safe chicken tractor. I tried shutting them up in the garage but the little Houdinis got out. Then I looked for them to no avail with a flashlight after dark.

In the morning I found Mama-san sitting on the babies. I thought I'd put a box over the lot and then get them in the tractor somehow. She did not concur.

Instead, she flew at my face several times while the chicks scattered. Which led to plan B. I put the chicks I could find into the tractor and waited for their peeps to attract the mother. Then I rounded up the stragglers.

All but one. I heard some peeping underneath a huge BMT (big metal thing) in the garage. Too heavy to lift and not enough space underneath

That's when my long past fire department training kicked in. I remembered when we were practicing auto extrication how we used pieces of wood for cribbing to stabilize the vehicle so you could get the people out. A pry bar and some scraps of 2x4 later and the mother and child reunion had occurred.

I think there are eight of the little buggers now with Mama-san in a fairly safe place. Haven't gotten a lot of gratitude from her though.

I realize that crows and other tool-using animals perform more complicated feats every day, but this was pretty good for me.
by El Cabrero 1 comment:

Messing with Medicaid could hurt veterans

With the fate of America’s health care system up in the air, it might be prudent to think about how changes to it might impact different sectors of the population. This is especially true of the Medicaid program, which in any given month provides coverage to nearly 75 million Americans of all stripes.

Among that population are children, the elderly, people with disabilities, workers, people in recovery and one group you may not have expected: veterans.

This is a big deal in a state with one of the highest percentages of veterans in the population. According to Ballotopedia, veterans make up slightly over 9 percent of our population. I can’t figure out how to do the math, but I’m pretty sure that most families in the state, including my own, have members who served in the military.

According to a new report by FamiliesUSA and VoteVets.org, 1.75 million veterans — around one in 10 — receive Medicaid coverage. This includes but isn’t limited to 340,000 who gained coverage due to Medicaid expansion under the Affordable Care Act and who may lose care if it is repealed.

Contrary to popular belief, not all veterans receive care from the VA. According to the Congressional Research Service, in 2014 only about 42 percent of the total veteran population was enrolled by the VA.

Eligibility for VA programs can depend on a number of factors, such as minimum service requirements and disability and discharge status.

In addition, not all eligible veterans can take advantage of VA services. For example, one-third of enrolled veterans didn’t use VA services in 2014. Transportation issues and distance from VA facilities can be a bar to access.

Finally, the VA isn’t set up to provide for the health care needs of veteran’s families.

By contrast, Medicaid provides care that can fill gaps not covered by other programs or complement the services they offer. In some cases, Medicaid is a supplement for VA or Medicare for veterans over age 65.

However, the report notes that about half of veterans covered by Medicaid were between 18-64 years of age and were ineligible for Medicare. Of these, 40 percent had no other form of coverage than Medicaid. In 2015, Medicaid provided coverage for 660,000 veteran’s spouses.

Undoing the Affordable Care Act isn’t the only threat to veteran’s health care. Some in Congress have proposed structural changes to the traditional program, such as block granting, budget cutting and capping benefits.

As the report notes that veterans are at a higher risk than most other people for “unique and sometimes serious or complicated health care issues as a result of their service. These health conditions might include musculoskeletal conditions, traumatic brain injuries, and posttraumatic stress disorder.”

It concludes that “Congress should be taking steps to make it easier, not harder, for veterans to access the health care they need when they need it. Voting to end the Medicaid expansion or to cap or cut Medicaid is a vote against veterans and their families.”

(This ran as an op-ed in today's Gazette-Mail.)
by El Cabrero No comments: 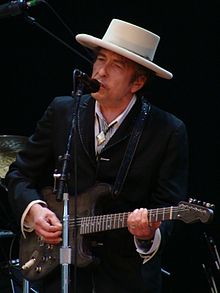 Image by way of Wikipedia.

In case you didn't notice, today is Bob Dylan's birthday. His 76th to be exact. If I had to pick one person who provided the soundtrack of my life it would him. My favorite Dylan isn't the young idealistic one singing political songs. It's the inspired vessel of the Muses with the power of the word. I really  wonder sometimes if even he knows where his songs come from.

I remember being at an Arlo Guthrie concert where Arlo explained his theory about where the songs came from. He said that writing songs was like catching fish and that Bob just fished upstream of everybody else. Sounds about right to me.

When people outside West Virginia ask me about Senator Joe Manchin, I usually say that some days are better than others. (My wife says that about me most days.) Today is one of his better days.

In response to the Trump administration's proposed budget, which slashes programs that help working people and hits Appalachia the hardest while cutting taxes for the very rich, Manchin criticized a "slash and burn" approach that "lacks compassion."

“It’s just very demoralizing to see this type of budget being out,” Manchin said. “Every state is going to be affected, there’s not one state that’s going to be spared on this.”

“You name it and, by golly, we get hit because there’s so much of this that affects every part of our state,” Manchin said.

The budget would also zero out funding for the Appalachian Regional Commission, which has had a huge positive impact on the region, as independent research by WVU and others have shown. Given its record of accomplishment, it's no surprise that the ARC has some pretty powerful Republican supporters, including senate majority leader Mitch McConnell.

Some other reactions to the proposed federal budget have warned that, if implemented, it would increase hunger, poverty and ill-health and lead to a new gilded age.

Considering the support candidate Trump received from this region, there doesn't seem to be a lot of gratitude in evidence.