Insight of the week 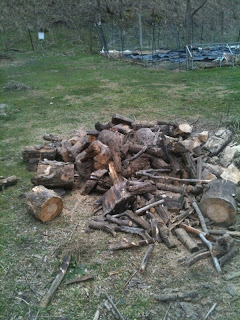 It occurred to me this weekend that it is easier to cut firewood when one has a chainsaw that actually works.
by El Cabrero No comments:

Email ThisBlogThis!Share to TwitterShare to FacebookShare to Pinterest
Labels: chainsaws

So many rant-worthy topics, so little time

There's so much going on these days, I feel like shouting "Serenity now!" like Frank Costanza on those Seinfeld reruns.  First off, it looks like a coal mine safety bill is hung up in the WV legislature because coal industry lobbyists aren't entirely happy with some of its provisions.

Silly me--I thought the purpose of the bill was to make coal mines safer for the people who actually work in them rather than to gratify the people who profit from their labor. The Gazette had a good editorial on that.

On the bright side, the superintendent of Massey Energy's Upper Big Branch mine has been indicted. Here's hoping there's more of the same all the way up the chain.

Meanwhile, back at the ranch, the state mine safety agency released its report on the disaster Thursday. Its findings back up previous reports by the Governor's Independent Investigative Panel, MSHA, and the UMWA.

It will be a total disgrace (not the first of its kind) if the state fails to pass new and strong safety legislation because legislators are so cravenly servile to coal.

One more possum story for the road 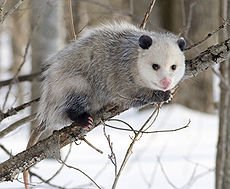 El Cabrero has recently sworn to stop blogging about possums, at least until the Annual Thanksgiving Possum Recipe edition. In fact, one reader suggested I move on to another topic, such as racoons.

However, a friend just sent me another compelling possum story which I feel obligated to share here. I am nonetheless pleased to say that the story also contains a reference to a raccoon. I'm hoping this will keep everyone happy.


When in college I had close encounter of the opossum variety. I was living in a really rundown house in Austin Texas, where one of my housemates was always complaining that a possum was stealing her cat's food. One cold  - well, moderately cool (this is Austin we're talking about) - winter night I went to sleep in my loft only to be awoken by a thump and a furiously scratchy/scrambling sound. A possum had crawled under a rotted eave apparently seeking a warm place to nap, and had fallen through a weak place in the sheet-rock of my ceiling.


I turned on a light and put on my pants. Then with a bit of wary maneuvering I approached Pogo with an emptied trashcan.

After what seemed to me to be an entirely unreasonable amount of marsupial teeth-baring and threatening (which probably seemed completely justified to the other party) I managed to get my uninvited guest trapped and moved to a table in the living-room. The next morning we called animal control, but all had to leave (since we did actually have classes) before they came. We left the door open and a note on the overturned trashcan prominently sitting on our livingroom table.

I don 't know exactly what happened to the possum, but the catfood stopped disappearing.

That house was in the city, but it was still regularly visited by animals, many of the more-than-two-legged type. I remember once going outside to put compost on our compost pile, only to find myself in a stare-off with an entirely unrepentant raccoon, who was sitting on the pile with a cantaloup peel in it's very human looking paw.

I could have sworn I heard the bandit say "what? You threw it out."

SOME FACTS ABOUT THE SAFETY NET here.

Regarding goats and accents

This blog was established six years ago to cover cutting edge economic justice issues.  While all that is no doubt important, it is hard to deny that many posts these days have been devoted to such things a possums and zombies.

What can I say?

In an effort to clear the palate, I now offer this item, which suggests that goats, just like humans, speak in accents depending on their locations and circumstances.

All of which leads me to wonder whether the twang in caprine accents increases as one moves south in El Cabrero's beloved state of West Virginia. Inquiring minds want to know.

IMPORTANT NOTICE.  I promised yesterday to avoid writing any more about possums. Tomorrow I may well break that promise.

ON A MORE SERIOUS NOTE, here's a look at the war on science currently waged by climate change deniers.

A HOPEFUL SIGN? A bill to address prison overcrowding crossed a hurdle in the WV senate.

The zombies are going to get jealous...

...if I keep writing about possums, but I must include the following correspondence from a Goat Rope reader in Pennsylvania:


We live in Germantown - a very urban area, but one in which we do see possums wandering occasionally.
Many  years ago our downstairs tenants asked us to look after their Scottie dog, Angus, for a weekend.  There was snow on the ground.  We took him for a long walk on his leash through our nearby Wissahickon Park.  When we got back, we released him from the leash for a run in our back garden.  He ran to the back wall and all of a sudden there was a  tremendous screeching and growling.  I ran up the garden path to find a whirling ball of fur, put my boot on it and hauled on Angus's collar.  Fortunately, the animals fall fell apart.  A huge possum ran off, and I dragged Angus, still barking into the house.  Miraculously neither animal was hurt.  We confessed to Angus's owners after checking very carefully over every inch of body.


This just goes to show that  possums aren't just for hillbillies anymore.

p.s. I promise to do my best to do my duty to refrain from mentioning these primitive mammals any more until the Annual Thanksgiving Possum Recipe edition. Unless it really seems like the right thing to do at the time.