It's that time of year at Goat Rope wherein the dying year's reading is discussed. Here are some fairly random but interesting ones that I'd recommend, presented in no particular order.

Note on method: some books included in the category of "fun books" are kind of downers but they are the kind of reading material you don't have to force yourself to read.

*All is Change: The Two-Thousand-Year Journey of Buddhism to the West, Lawrence Sutin. Call me weird, but I think this was my favorite for 2008.

*Three Cups of Tea: One Man's Mission to Promote Peace...One School at a Time, Greg Mortenson and David Olive Relin. The true story of how a mountain climber found his life's vocation building schools in Pakistan and Afghanistan.

*Richistan: A Journey Through the American Wealth Boom and the Lives of the New Rich by Robert Frank. After the financial meltdown, this may be more of a cultural artifact than a current account, but it was a fun tour through an alien world.

*Animal, Vegetable, Miracle: A Year of Food Life, Barbara Kingsolver, Camille Kingsolver, Steven L. Hopp. This one got lots of people eating closer to home. At Goat Rope Farm, we're all about that. Plus, the authors are all Appalachians to one degree or another.

*Glass Castle, Jeannette Walls. If you think your childhood was rough, check out this autobiography. Sad to say, El Cabrero's beloved state of West Virginia didn't come off very well in this.

*The Black Swan: The Impact of the Highly Improbable, Nassim Nicholas Taleb. A great poet (but not so great defense secretary) once said that there are known unknowns and unknown unknowns. One of my pet peeves is dealing with people who think they can predict the future and plan without taking surprises into account. Too bad the people who really need to read this won't.

*American Shaolin: Flying Kicks, Buddhist Monks, and the Legend of Iron Crotch: An Odyssey in the New China, Matthew Polly. You don't have to be a martial arts nut like me to enjoy this one.

Psyched out: more from the Goat Rope book shelf 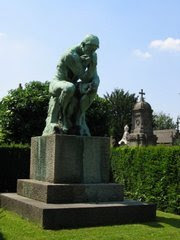 Tis the season at this blog to discuss the waning year's reading material. I don't know about y'all, but it's been a good year of psychology books at Goat Rope Farm. One of the best was Philip Zimbardo's The Lucifer Effect: Understanding How Good People Turn Evil, which filled up a lot of blogging days round here this past summer. I'd put that one on the "must read" list.

A fun overview of research in the field can be found in Lauren Slater's Opening Skinner's Box: Great Psychological Experiments of the Twentieth Century. Her book led to me some classic Old School psychology, such as Leon Festinger's 1956 classic study of cognitive dissonance When Prophecy Fails, a case study of a UFO cult that miscalculated the date of the end of the world.

One of the most interesting books of the year was Steven Pinker's The Blank Slate: The Modern Denial of Human Nature. Pinker demolishes certain misconceptions enshrined in some models of social science and in some "left" circles. These include a denial of the legacy of our animal past and some of the nastiness that might entail (the blank slate), the belief that people in a "state of nature" are peaceful and holistic (the noble savage) and the idea that mind is independent of brain (the ghost in the machine). Some bubbles need busted.

For something completely different, Oliver Sacks' Musicophilia: Tales of Music and the Brain takes and interesting look at people with strange and interesting musical abilities and disabilities.

I also revisited some old items on the shelf, including Man and His Symbols by C.G. Jung et al and James Gilligan's unfortunately neglected Violence: Reflections on a National Epidemic. Jung, by the way, was the subject of a huge but interesting biography by Deirdre Bair. 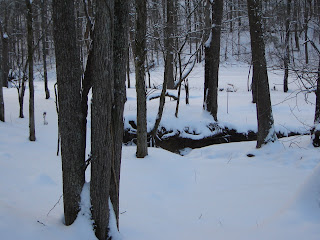 Longtime Goat Rope readers may remember my fondness for these lines from Hamlet at this time of the year, but it can't hurt to take another look:

Here's hoping that holds true this year. Best holiday wishes to all from Goat Rope Farm!

You can expect another post on the Feast of St. Stephen (that's Dec. 26 for all the heathens or excessive Protestants out there)--just don't expect much.

This may be a bronze of the ancient Greek bard Hesiod. Image courtesy of wikipedia.

It is the immemorial custom at this blog (for the last couple years anyway) to reserve the last week or so of the year to discussing items from the Goat Rope book shelf. This involves giving a shout out to some of this year's best reading material, although little if any of it was written in 2008.

(Note: While El Cabrero is pleased to discuss selected books, I cannot divulge the total number of books consumed this year lest my employer realize what a slacker I am.)

This first installment consists of classics, many of which have been revisited after years since the previous perusal.

So here goes, starting with the ancients. The ancient Greek bard Hesiod was no Homer, but he had his moments. I started 2008 with another run through the Theogony, his account of the origin of gods, the universe and everything. As he put it,

In the beginning there was chaos.

Come to think of it, there still is.

Then came another look at Plato's Symposium, a dialogue on the nature of love. For some reason, I liked it better the last time I read it. Followers of this blog will not be surprised that the Odyssey of Homer got another look, since I spent a couple of months taking the long way home with its hero.

I also took another look at Rome's answer to the Homeric epics, the Aeneid of Virgil. Virgil was a more elegant writer than Homer although I prefer the latter. One difference between the work of Homer (whoever he was/they were) and Virgil is that the Homeric epics grew while Virgil's was self-consciously written. Good though.

I love these lines from Aeneas' visit to the underworld (which make a great mission statement):

...your arts are to be these:
To pacify, to impose the rule of law,
To spare the conquered, battle down the proud.

That works for me...

On the borderline between ancient and medieval literature lies Boethius' Consolations of Philosophy, a wonderful book by a man who was unjustly accused by the Powers that Were and which was composed while he prepared for a particularly nasty death. His musings on the nature of Fortune inspired this year's series on luck and randomness. It's definitely worth a look.

HEARTS OF DARKNESS, then and now, form the subject of this elegant rant by Chris Hedges. El Cabrero is a sucker for Joseph Conrad references.

LOOKING FOR A PLACE TO CUT SPENDING? There is quite a bit of indefensible "defense" spending which is really just corporate welfare.

EVERYBODY HURTS, but we hurt more if we think people are deliberately inflicting it.

PARLEZ USTED PAJARO? Here's an item on deciphering the songs of birds.

Do moon coyotes howl at the earth? 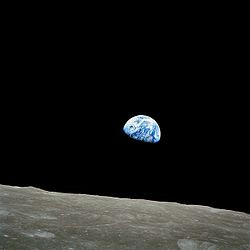 Earthrise from the moon, courtesy of wikipedia.

El Cabrero has a feeling that lots of people will be slacking off today as the Christmas holiday approaches. Not that there's anything wrong with that.

The holiday season seems a little different this year. I don't know about you, but the annual ritual of excessive consumption that has grown around the holiday, always pretty crass, seems particularly off key given the growing economic crisis that is affecting so many people around the world. I keep wondering how bad it's going to get.

In the meantime, here are a few items, starting with one about the above image...

AN IMAGE THAT CHANGED THE WORLD (see above) is discussed in this article from the UK Guardian. Short version: the trip to the moon helped people discover the earth.

KICKING THE ECONOMIC BUBBLE HABIT will be tough.

A LENGTHY OBITUARY FOR "THE OWNERSHIP SOCIETY" and how Bush policies contributed to the current crisis can be found here.

GOD BLESS US, EVERY ONE. The latest edition of the Rev. Jim Lewis' Notes from under the Fig Tree ponders Dickensian themes in these hard times from A Christmas Carol.

SPEAKING OF HARD TIMES (AGAIN), labor and community groups in WV called for a meaningful stimulus package to get the economy moving again. Here's the coverage from the Charleston Gazette.

SURF'S UP! Waves in the Pacific Northwest have been increasing in height by 7 centimeters a year and no one is sure why.