...I think the definition of disgrace is to kill a bill like Move to Improve, which would promote healthy physical activity for WV's schoolchildren, while at the same time passing "the cupcake bill," which promotes obesity. Nice job, WV House Education committee. Not.
by El Cabrero No comments:

I love it when people who don't give a damn about poor people pretend to care. Any effort to raise the minimum wage usually brings such people out. The main argument, which was also used to oppose emancipation, goes like this: trying to help them only hurts them, so the best way to really help them is to stick it to them.

One novel version of this argument was heard at the WV legislature this week, where crocodile tears were shed over the fact that a rise in wages means fewer public  benefits. Uhhhh, isn't that the point? And since when did these people care about public benefits, other than those extended to rich people and corporations?

...but it kind of sums up the way things look to me tonight. When I got in from a long day in which the home team took some hits, I composed the following once sentence historico-political analysis of my beloved state:

West Virginia may be a failed state, but it is a highly successful corporate colony.


What I didn't add in the tweet is that nowadays, all the world knows that to be the case. Except maybe some people here.
by El Cabrero No comments:

Another day, another hurdle or three

This is night two of being snowed into the capitol of El Cabrero's beloved state of West Virginia to attend the waning days of the legislative session. It is quite a contrast from Goat Rope Farm. For more than 24 hours, I haven't seen or heard any goats, guineas, roosters, cats, dogs or turkeys.

Seriously, though, the home team won a innings today, although the game is still uncertain. Nearest and dearest to my heart is the Future Fund, which would create a permanent source of wealth for WV. It cleared the House Judiciary today. Next stop, finance, then the House floor. If it makes it all the way through, I have taken a sacred oath to get plowed under.

Next, two good bills that already passed the House cleared Senate Judiciary. One, which heads to the floor next, is the Pregnant Workers Fairness Act, which is pretty much what it sounds like. It would require employers to make reasonable accommodations to women who are of the pre-partum persuasion.

Another bill was one that I gave up for dead a year or so ago. It is now called the Valued Employee Retention Act, but we called it work sharing back in the day. Basically, it's a reform of unemployment insurance that would let employers cut hours instead of jobs while allowing workers to collect benefits for lost wages. It has one more hurdle before hitting the Senate floor.

Here's an interesting development on another front. One item on the Our Children Our Future platform is a bill that would make the kinds of Sudafed (I've never figured out how to spell that) that can be used to make meth into a prescription drug. Big PHARMA has cried havoc and let slip the dogs of war on this, to coin a phrase. But their claims are bogus. Tamper-proof forms of the drug would remain available above the counter.

Anyway, folks wanting to cut down on WV's meth problems got a boost from an unexpected quarter. Haley Barbour, former governor of Mississippi and head of the Republican National Committee wrote to House members supporting this step. He noted that when his state made it a prescription drug,  meth labs declined by 98 percent. According to Barbour, "This bi-partisan bill may be the most significant drug enforcement legislation in the history of Mississippi."

In the spirit of fair play, ippon (Japanese for full point) for Barbour for this good deed.

In West Virginia, according to the Eric Eyre of the Charleston Gazette, "Meth lab seizures have more than tripled in West Virginia -- from 154 labs in 2010 to 533 labs last year." That is way uncool. And any kid found in a meth house gets a fast ticket to foster care. Shame on the meth lobby, however they style themselves. 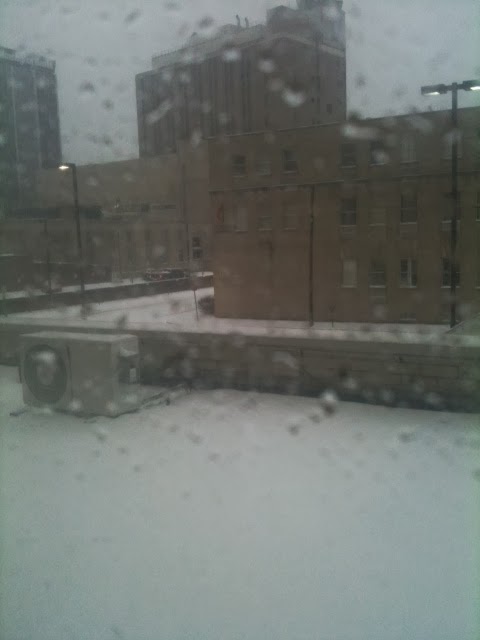 View from a motel room.

El Cabrero's beloved state of West Virginia got hammered with what I devoutly hope to be the last winter storm of 2014. It's been a slushy mess of rain, freezing rain and snow.

I drove to Charleston last night to beat the storm because some important bills are going to live or die in the last days of the legislative session. The Future Fund, a prospective mineral trust fund, was on the House Judiciary agenda last night, but the committee was busy with SB 373, the water bill, until the wee hours of the morning. Future Fund may be up this morning.

I'm not sure what the odds for the Future Fund are. It passed the Senate unanimously, but the House is pretty strange this year, with rivalries within and between houses and parties. One would think it would be hard to be against setting aside some revenues we haven't seen yet to meet needs we don't have yet, but anything could happen.

As I've said before, the most dangerous words in West Virginia policy and politics are "It's a no-brainer."
by El Cabrero No comments: