The latest Front Porch podcast is about the misnamed Religious Freedom Restoration Act, now under consideration in the WV legislature. I thought this was going to be a good one, but it has been severely cut, with some of the best parts taken out. Editors...
by El Cabrero No comments:

Such a long day

If I had to come up with a title for a story about the WV legislature today, it would be something like "Beyond Whack."

Among the reasons for this was a public hearing on the Some PeopleReally Hate and are Scared of Gays Act Religious Freedom Restoration Act, which is mostly about protecting the rights of people who hate gays to hate gays in the name of religion.

Before that was another public hearing on proposed right-to-work-for-less legislation at which I spoke against the legislation. It's always nice to hear from out of state billionaire-funded groups talk ****. It was clearly and "all hands on deck" command performance for the various representatives of WV's colonial overlords.

It would be hard to say whether screwing over workers or the politics of cultural jihad are the top priorities this session, but WV would be better off without either.

On the bright side, several hundred people of all ages attended Kids and Families Day at the capitol and tried to support a positive agenda.

I'd really like for all this to be a bad dream from which I will soon awaken.
by El Cabrero No comments:

A friend suggested a while back that I blog about how Wal-Mart is pulling out of many communities, after driving local businesses out as well. Bloomberg Business has an interesting article on just that.

What's really sad is that a Wal-Mart is closing in one place where it's truly needed: Kimball WV in the state's poorest county of McDowell, which is known among other things for its food deserts. The Spousal Unit and I often rant about the retail giant, but we agree that the Kimball one gets a pass. Too bad they're pulling the plug. A lot of things just won't be available there in a place where travel is hard and people don't have much to spend.

Due to a decades-long decline in coal employment, McDowell has hit hard already. It really didn't need another hit. Wal-Mart no doubt killed local businesses. I'm not sure what will take its place.
by El Cabrero 1 comment:

Here's the latest edition of The Front Porch. The podcast came out Friday, but posting gratuitous animal pictures seemed more important at the time.
by El Cabrero No comments: 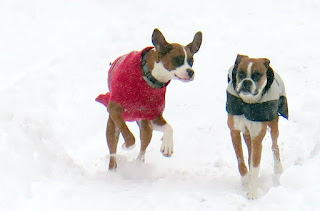 If these guys know, they're not saying. (Photo credit Spousal Unit.)
by El Cabrero No comments: