Lots of people I know, including myself, are gearing up to push for the biggest advance for social justice in several decades. I'm referring to the expansion of health care coverage via Medicaid under the Affordable Care Act.

The US Supreme Count decision which spared that ACA also partially undid one of its key provisions which would have required states to raise the threshold for Medicaid to people living under 138 percent of the federal poverty level or risk losing all their Medicaid funding. Under the ruling, states have the option to pass on the expansion and keep their current funding. This means a major struggle is taking place all over the country (especially in those states that hate their poor and working people) to push for the expansion. West Virginia is one of the states in play.

Here are some interesting developments:

*Republican governors in Arizona (!), New Mexico and Nevada are leaning toward Medicaid expansion, as this NY Times story reports.

*A new poll shows that voters in several states favor the expansion.

*Religious leaders and their allies in Ohio are working to nudge their governor in that direction. We'll be copying that here in WV soon, I'd wage.

*Meanwhile, back at the WV ranch, the WV Healthy Kids and Families Coalition, of which the American Friends Service Committee here is an active member, a new campaign to combat child poverty is making a lot of noise. After hosting community meetings all over the state, stakeholders recently voted on their top five priorities and expanding Medicaid is at the top of the list. Many other groups are gearing up for the push, which would cover around 120,000 low income working West Virginians.

This is a great fight and would be a sweet win, the sweetest in my lifetime.

I'd advise that, if one's loins are ungirded, this might be the time to remedy that situation. It's on.
by El Cabrero No comments:

Last night I had the opportunity of discussing health care with someone from a few counties away. The particular topic was the expansion of Medicaid coverage under health care reform to low income working people earning up to 138 percent of the federal poverty level.

The person in question, who was uninsured, underpaid and appeared to be a candidate for diabetes, hypertension and/or heart disease, didn't think this was a good idea. Apparently, some unworthy people might receive coverage as a result.

I remained polite, of course, but inside wasn't sure whether to laugh or cry. Folks with this kind of attitude were referred to by the Industrial Workers of the World or Wobblies as "Scissorbills," meaning someone who would cut off his or her nose to spite the face (think duck bill). Joe Hill wrote two songs about such people titled "Scissorbill" and  "Mr. Block."

The second song is better known these days Here's the chorus:

Oh Mr. Block you were born my mistake
You take the cake
You make me ache
Go tie a rock on your block and go jump in the lake
Kindly do that for liberty's sake


(Note: I only quote that for the sake of historical and cultural relevance. I don't actually want such people to jump in lakes. At least not when it's this cold outside. Ask me again in springtime.)

The discussion reminded me of a dark saying that I think was said by Theodor Adorno to the effect that domination is perpetuated by the dominated. That may sound shocking but it is a basic axiom of the theory of nonviolent action that systems of injustice would be unable to function if people didn't cooperate with them. If that cooperation, sometimes called the "pillars of support," is removed, the whole thing comes tumbling down.

Alas, that's easier said than done, although here and there it has happened. Some folks may not get there this time around. 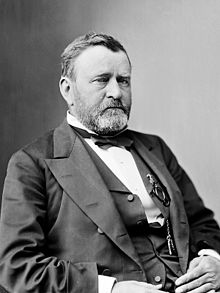 I just finished listening to an unabridged biography of general and President Ulysses Grant titled The Man Who Saved The Union: Ulysses Grant in War and Peace and I've come away with a renewed appreciation of Grant as president. As a lifelong Civil War dork, I was quite familiar with his achievements in the war but not so much with what came later.

This isn't something a lot of us learned in schools, where Grant's presidency, if addressed at all, is often remembered for this or that scandal. But on the most important issues of his day, defending the rights of former slaves and humane treatment of the American Indians, he was head and shoulders above his contemporaries. There is something remarkable about his unshakable character, both in war and peace. (He even relied on Quakers to help implement his efforts to promote peace with Native Americans, something I missed despite 20+ years of working for AFSC.)

I must have missed this too, but apparently conservatives have recently made an effort to take Grant's face off the $50 bill and replace it with Ronald Reagan (!). While the spirit of fairness compels me to admit that the Gipper may have had his moments,  I can't imagine bumping the savior of the Union in favor of the buster of a union. Here's  a great op-ed in defense of Grant by Sean Wilentz. And here's a sample paragraph of the same about what may be behind the effort to dump grant:

In reality, what fueled the personal defamation of Grant was contempt for his Reconstruction policies, which supposedly sacrificed a prostrate South, as one critic put it, "on the altar of Radicalism." That he accomplished as much for the freed slaves as he did within the constitutional limits of the presidency was remarkable. Without question, his was the most impressive record on civil rights and equality of any president from Lincoln to Lyndon B. Johnson.


There is also something heroic about his last battle, against lung cancer and time, when, with the help of Samuel Clemens, he discovered his gift for writing as he completed his memoirs in an effort to provide for his family.

If you get the chance, try to learn a little more about this decent but unassuming person. I hope Grant once again assumes his rightful place in the American pantheon. And stays on the $50.

El Cabrero is on the run and under the weather today, but I did manage to find this great quotation from Plato. I think it's a keeper.

...he who really and naturally reveres justice and really hates  injustice is discovered in his dealings with that class of men to whom he can easily be unjust.


You really can tell a lot about people by how they treat the less fortunate. Worst of all are those who grovel to those above and terrorize those below.
by El Cabrero No comments: