Getting real about fixing health care

A lot of great quotes have been attributed to Winston Churchill, British Prime Minister during the World War II era. Too bad he didn’t actually say some of them.

That’s probably true of one of my favorites, although I’m not going to let that stop me now.

The nonquote I have in mind goes like this: “Americans can always be counted on to do the right thing — after they’ve tried everything else.”

(He really should have said that.)

That line came to mind after the latest health care roller coaster ride that ended with Arizona Sen. John McCain’s movie-moment no vote.

In his statement, McCain had this to say:

“We must now return to the correct way of legislating and send the bill back to committee, hold hearings, receive input from both sides of aisle, heed the recommendations of nation’s governors, and produce a bill that finally delivers affordable health care for the American people. We must do the hard work our citizens expect of us and deserve.”

To paraphrase, we’ve already tried everything else. Maybe it’s time to do the right thing, which would consist of keeping what’s working and fixing what isn’t.

Maybe it’s a pipedream in this moment of extremism, but it would be the best solution for the American people.

While I’ve spilt a lot of ink (or pixels) defending parts of the Affordable Care Act, I’ve never been an uncritical supporter. At best, it’s an extremely indirect way of getting part way to where we should be, i.e. covering all Americans. It works really well for millions of people — including around 225,000 in West Virginia — but not much or even not at all for others.

Recently, my co-worker, Lida Shepherd, with help from Andy White, interviewed several people impacted by the ACA who received care from Cabin Creek Health Systems. Some purchased health care on the exchange and some were covered by Medicaid expansion. A former coal miner received additional help for black lung due to ACA amendments pushed through by the late great Sen. Robert C. Byrd, D-W.Va.

We didn’t talk to enough people to get a scientific sample, but it gave us a pretty good sense of where people were.

Another woman echoed that sentiment: “You literally wake up one day after you’ve had nine months or more of sobriety and you’re like — OK, I didn’t realize it but my house is clean every day. My daughter always has clean clothes and food. Her hair is always done.”

In some cases, the ACA was a mixed blessing, but still a blessing. The former miner related how he and his wife purchased coverage on the exchange for her, only to find out that she had a potentially fatal heart condition. He said that news “just took the bottom out of my world.”

Thanks to the coverage, she could get lifesaving but expensive surgery. He said, “Obamacare, although I paid a severe co-pay and a severe out-of-pocket pay, which was roughly $15,000 combination of the two, they picked up the rest of the bill. In that perspective, I got a bargain, though it was a large amount of money.”

A woman struggling with several pre-existing conditions and buried in out-of-pocket costs was frustrated with the ACA but said, “You tell me how I’m going to get insurance coverage by anybody else if this does completely go away, because I have pre-existing conditions. I can’t not have health care. I’m terrified. What am I going to do?”

If I had to sum up what everyone had to say in one sentence, it would be something like, “Make it better if you can, but don’t take it away!”

Otherwise, as one gentleman put it, “You might as well dig some graves, ’cause you’re going to be burying them.”

In a less-irrational world, the fits and starts (mostly fits) of repeal would give way to basic problem-solving on issues such as bucking up the individual market. According to the Commonwealth Fund, a private, nonpartisan health foundation, “The immediate concern is stabilizing marketplaces to ensure that the 17 million to 18 million people getting coverage through the individual market will be able to successfully re-enroll during this fall’s open enrollment period.”

Other basic steps would include ensuring that basic plans are offered in areas currently “bare” or without a plan available, and dealing with the issue of reinsurance, which causes problems for patients when one insurance firm acquires another.

West Virginia’s senators, Joe Manchin and Shelley Moore Capito, are uniquely positioned to move the discussion in a more productive direction if they seize the moment.

In any case, I hope all members of Congress and the current administration will consider what one person had to say about it: “Take away your own health care and see how you like it.”

(This appeared as an op-ed of mine in yesterday's Gazette-Mail.)
by El Cabrero 1 comment:

A moment in the sun (literally) 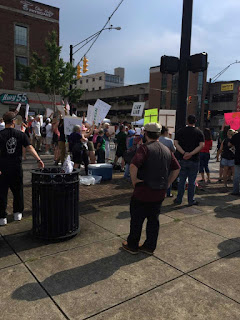 As you may have heard, a certain elected official of the United States paid a visit to Huntington, WV last week. When I heard that the ACLU was sending people there to be legal observers, I tagged along as an unofficial volunteer.

The job for the day was not to participate in any of the rallies or protests, but to monitor conditions with the goal of ensuring that people of whatever viewpoint were able to exercise their First Amendment rights, documenting things as necessary.

I think the subtext  for me anyhow was to pay attention in case the situation started to get out of hand.

Mostly, I walked around in the heat for five hours getting my brain baked. And fortunately things didn't get out of hand. The police were generally very professional. There was some screaming back and forth from supporters and protesters but I only saw one person being escorted out by police and no serious violence, even though the potential was definitely there.

There were people across the spectrum who seemed intent on stirring things up. There was even a group of armed militia-type people standing where the protesters were. Fortunately, they were fairly laid back.

The thing that struck me the most was that, although the lines were clearly drawn, most people walked past each other without incident when it was over. There was some give and take, sometimes heated. And at times people seemed to be honestly baffled with how people on the opposite side could think and feel the way they did. Then they went home.

In the end, I found all that to be oddly reassuring.

If you're trying to make sense of WV Governor Jim Justice's high profile party switch and what that means for WV, good luck--and you're in good company. Here's some basic reporting by Brad McEllhenny of WV MetroNews. And I think the Gazette-Mail's Phil Kabler hit most of the right notes with his column.

If you are up for some more amusing WV related news, check out this item from Vanity Fair that talks about the WV ACLU's hilarious brief about coal baron Bob Murray,  who made good on his threat to sue Comedy Central's John Oliver after somewhat less than reverent treatment on the tube. Giant Squirrel fans, you're going to love it.

Finally, it looks like Christianity minus the whole Jesus thing is alive and well in the USA. Sad.
by El Cabrero No comments: