From the Front Porch to Parts Unknown 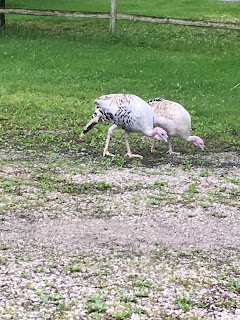 For the last three years, I've had the opportunity to rant on WV Public Broadcasting's weekly program/podcast The Front Porch. The premise was to bring together people with different worldviews to have civil discussions of current issues, sometimes with guests.

The program was the brainchild of outgoing WVBP's outgoing executive director Scott Finn, who is leaving to take a similar position on the mean streets of Vermont, where life is cheap and death lurks behind every maple syrup-making sugarhouse. Unfortunately, the program is probably ending with his departure as new leadership takes charge.

It was fun while it lasted. I hope they bring it or something like it back...or that we find a new venue. In any case, I'm grateful for the chance to try it. I also appreciate Laurie Lin and Jessi Troyan, who "appeared" on the program along with Scott. We had some interesting discussions.

In our last episode, we look back over the issues we discussed and debated and we also talked about the recently released episode of Anthony Bourdain's Parts Unknown, which featured West Virginia.

I know some people had issues with it, but I think it could have been SOOOOO much worse.

I'd encourage people to take a look at the program--and I'd be interested in hearing what others think about it.

Fifty years ago, the Rev. Martin Luther King Jr. and his allies made some ambitious plans. They hoped to bring poor people together across racial and other social divides to call for “a radical redistribution of economic and political power.”

They hoped that a multi-racial Poor People’s Campaign would awaken the conscience of the nation and spark a mass movement to end poverty, systemic racism and the war economy.

The campaign came to pass but the desired results obviously did not. I can’t help but wonder what might have been different had Dr. King not been assassinated on April 4, 1968. I don’t believe that history is made by a few heroic figures, but it seems clear that individuals can make a huge difference.

In any case, half a century later we have unprecedented levels of economic inequality and a political system dominated by the very wealthy who seem intent on widening the gap. More people in America live in or near poverty now than in 1968.

Today, in the wake of passing gigantic $1.9 trillion in tax cuts that benefit primarily wealthy people and corporations, Congress is contemplating drastic cuts and restrictions in food assistance to vulnerable Americans as the mammoth Farm Bill comes up for reconsideration.

Slashing spending on food assistance by billions and cutting off basic help to millions won’t promote work, although it is likely to exert a downward pressure on wages for working Americans.

Other programs — like Medicare, Medicaid, Social Security, student aid — that help millions of Americans and tens of thousands of West Virginians are also being targeted at a time when the wealthiest 1 percent owns more than the bottom 99.

This is clearly a moral issue, one that is all too often ignored by those preaching restrictive versions of religion and myopic views of morality.

Ignoring issues of social justice goes against the grain of the biblical religion so many profess. The prophet Isaiah, honored alike by Jews, Christians and Muslims, couldn’t be any clearer:

“Woe to those who make unjust laws,
to those who issue oppressive decrees,
to deprive the poor of their rights
and withhold justice from the oppressed of my people,
making widows their prey
and robbing the fatherless.
What will you do on the day of reckoning,
when disaster comes from afar?
To whom will you run for help?
Where will you leave your riches?” (Isaiah 10:1-3)


Around the country, there is a growing awareness of the need to revisit the goals of the Poor People’s Campaign in our new context and to issue a national call to moral revival.

In the words of the Rev. William Barber and the Rev. Liz Theoharis, co-chairs of the new campaign, “There needs to be a new moral discourse in this nation — one that says being poor is not a sin but systemic poverty is.”

(This ran as an op-ed in today's Charleston Gazette-Mail.)
by El Cabrero 1 comment:

Condemned to repeat it? 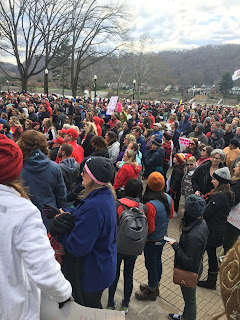 Teachers don't strike often, but when they do they rip away the veil from West Virginia's open secret, which is hidden in plain sight. To wit, our colonial economy, the legacy of 100+ years of absentee corporate ownership and exploitation, which created private wealth for the overlords and public squalor for everyone else.

He also wrote that


In its repetitive cycle of boom and bust, its savage exploitation of men and nature, in its seemingly endless series of disasters, the coal industry has brought grief and hardship to all but a small proportion of the people whose lives it touched.


All that is old news. But recent reporting by the Charleston Gazette-Mail's Ken Ward puts it into context for the new century in two recent ProPublica-supported pieces on the human costs of coal and whether we'll learn anything from it in the era of fracking. The jury's still out, but the home team isn't looking too lucky at the moment.

While I'm giving shoutouts to the Gazette, I second these words of political reporter Phil Kabler on the choices facing voters in the next election:

A fundamental question for voters in this election cycle and for the foreseeable future: Should state governments follow the Koch brothers/ALEC approach of shrinking funding for programs and services to the point of dysfunction in the pursuit of tax cuts that primarily benefit corporations and the wealthy, or should states impose a level of taxation that provides adequate funding for programs such as public education, higher education, transportation, infrastructure, public health, public safety, corrections and, yes, perhaps even the Human Rights Commission.