AND ALSO MUCH CATTLE 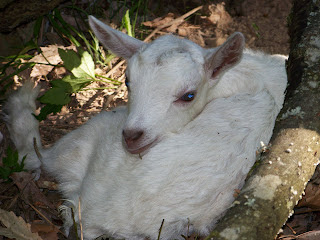 Goat Rope is all about the biblical Book of Jonah lately. Check earlier posts for more.

Here's a little weekend thought. If you like critters, you should love Jonah. Two of its main actors were animals (the great fish and the worm that killed the gourd vine). Without the first, there would be a good bit less artwork and folklore. And without the second, the whole point of the story couldn't have been made

But it is also a part of the Bible where God uses his speaking role on behalf of animals. In explaining to Jonah why he didn't want to wipe out Nineveh, he says

And should I not want to spare Nineveh, that great city, wherein are more than sixscore thousand persons that cannot discern between their right hand and their left hand; and also much cattle?

El Cabrero wonders how Nineveh would have fared if they had more goats than cattle. The little ones are pretty cute though. 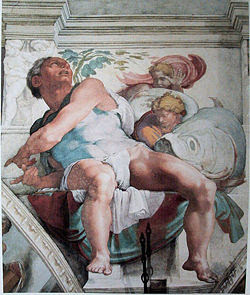 The Jonah jag continues at Goat Rope. If this is your first visit, please click on earlier posts.

If the biblical character Jonah happened to compete in a beauty pageant, he would probably not win the Miss Congeniality award. He's grumpy, quarrelsome and disobedient. He tries (unsuccessfully) to escape to the ends of the earth to avoid the prophetic call. He gets all bent out of shape because God didn't wipe out the city of Nineveh, yet he throws a hissy fit after his beloved gourd vine dies.

I love him. And I think we need more people like him.

Allow El Cabrero to explain. Our world is all too full of people who think they have a message from God to deliver. And you know what? Most of the time, they don't. Maybe we should make a new rule: if we think the universe wants us to deliver a message, we should try to resist it as long as possible. If we try to escape to the ends of the earth to avoid it and still can't (with some kind of great fish adventure in between), then maybe, just maybe, we really have something to say. Otherwise, it was probably just us. 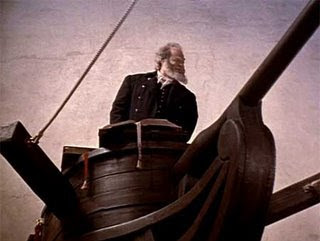 It'a all Jonah all the time lately at Goat Rope. And no discussion of that little gem of a story would be complete without at least a glance at that right whale of a book, Moby-Dick.

If ever a book ran away from its author, that would be the one. After making a name for himself writing travelogues, Melville masterpiece, unappreciated in his time, is vast and almost cosmic in scope. And of course he couldn't get by without a number of references to Jonah.

Prior to taking off on the Pequod, Ishmael visits a chapel at New Bedford to hear a sermon by the former whaler Father Mapple. And the topic was...you guessed it.

According to Father Mapple,

Shipmates, this book, containing only four chapters- four yarns- is one of the smallest strands in the mighty cable of the Scriptures. Yet what depths of the soul Jonah's deep sealine sound! what a pregnant lesson to us is this prophet! What a noble thing is that canticle in the fish's belly! How billow-like and boisterously grand! We feel the floods surging over us, we sound with him to the kelpy bottom of the waters; sea-weed and all the slime of the sea is about us!

You can find the whole sermon here. But it's way better to read the whole book.

JONAH AND THE WORM 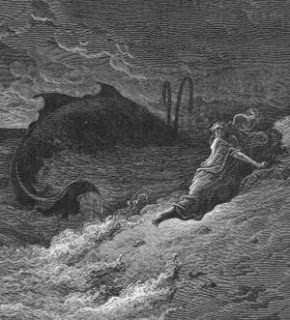 Gustave Dore's version of the fish with the eating disorder. How come nobody painted the worm that killed Jonah's gourd vine?

The theme at Goat Rope lately is the biblical story of Jonah, possibly history's first short story and one of its best. If this is your first visit, please click on earlier links.

Everybody remembers Jonah and the whale, but what about Jonah, the gourd vine and the worm? That's like the coolest part.

After the whale episode and successfully preaching repentance to the Ninevites, Jonah gets mad at God and pouts because the latter did not destroy the city. He even wants to die. Specifically, he's mad at God precisely because

thou art a gracious God, and merciful, slow to anger, and of great kindness...

Dost thou well to be angry?

As Dr. Phil might say, "How's that working for you?"

Jonah eventually made a shelter for himself outside the city and rested beneath the shade of a gourd vine. However, God wasn't quite finished with him. He prepared a worm to kill the vine (kind of the same way he prepared the great fish). That was the last straw for the ever-grumpy prophet. He REALLY wants to die this time.

At which point, God delivers the punch line:

But the LORD said, "You have been concerned about this vine, though you did not tend it or make it grow. It sprang up overnight and died overnight. But Nineveh has more than a hundred and twenty thousand people who cannot tell their right hand from their left, and many cattle as well. Should I not be concerned about that great city?"

I think the best way to read the story is to see the whole thing as a practical joke played on Jonah in order to teach him a lesson about compassion, although I'd be surprised if he saw the humor in it.

STILL ROAMING. Back with links and such Monday.

JONAH OUT OF THE BELLY 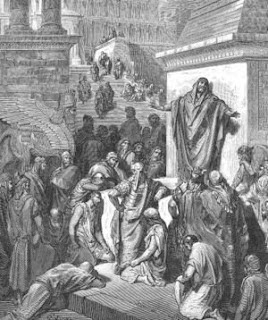 The theme at Goat Rope lately is the biblical book of Jonah, a little gem of a short story. If this is your first visit, please click on the earlier posts.

Yesterday's post summarized the plot of Jonah up to the point where he got vomited out of the fish's belly. Today, we resume the story.

I highly recommend you give the original a look. It's well worth the time, even if you ain't got no religion. It's that good a story. Here's one online version.

After rejecting the first call of God and doing the whole fish thing, Jonah once again gets the call to go to Nineveh and deliver the message of repentance. This time he does.

At least he can take a hint, even if it has to be a pretty major one.

Jonah goes to Nineveh to deliver his cargo, warning that God will destroy the place in 40 days unless they got their act together. They actually listen, fast, and dress in sackcloth and ashes. The local king sends out the word for everyone to do the same, including the animals.

If that was the case, there probably weren't any goats around.

Any ordinary prophet would have been happy about this, put "Mission Accomplished" on his aircraft carrier, and headed home. But not our boy. The Bible says

it displeased Jonah exceedingly, and he was very angry.

He throws his first temper tantrum of the story, complaining that the reason he didn't want to go there in the first place was that he knew God would go soft and spare the Ninevites. He asks God to take his life.

I think he may have had issues.

STILL GONE. Regular features should resume next Monday. Well may the US go when I'm gone.

JONAH IN THE BELLY 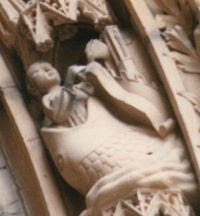 Carving of Jonah from the Worms Cathedral in Germany, courtesy of wikipedia.

“To produce a mighty book, you must choose a mighty theme. No great and enduring volume can ever be written on the flea, though many there be that have tried it.”

The little biblical book of Jonah is a whale of a tale even if it is flea sized. I highly recommend checking it out. It would only take a few minutes and you don't have to be religiously inclined to enjoy it. (For more by way of background, check out earlier posts in this series.)

Here's the Goat Rope condensed version. God tells Jonah son of Amittai to go and prophecy to the people of Nineveh and urge them to repent of their sins. If Jonah was a good prophet or even a nice guy, he would have said, "Here I am, Lord, send me."

Instead, he gets the hell out of Dodge and hops on a ship bound for Tarshish, which was in Spain. In biblical times, that was the ends of the earth. It would be like El Cabrero fleeing to Siberia to avoid having to prophecy to the flatlanders of Ohio (some of whom are cousins).

God is not amused and sends a storm that threatens to sink the ship. The sailors assume that some god is offended and cast lots to find the guilty party. Jonah fesses up and says they ought to throw him overboard to save themselves. Reluctantly, they do so. The storm stops.

Everyone knows the next part. The Bible says

Now the LORD had prepared a great fish to swallow up Jonah. And Jonah was in the belly of the fish three days and three nights.

Notice it says fish, not whale. From the line above, this may have been a special model, but let's not ruin a good story with literalism.

In the belly of the whale, Jonah prays and God relents. As the King James Version puts it,

And the LORD spake unto the fish, and it vomited out Jonah upon the dry land.

That's what most people remember, but there's a lot more to the tiny story.

About which more tomorrow...

STILL GONE. About another week to go. Y'all hold down the fort, OK?